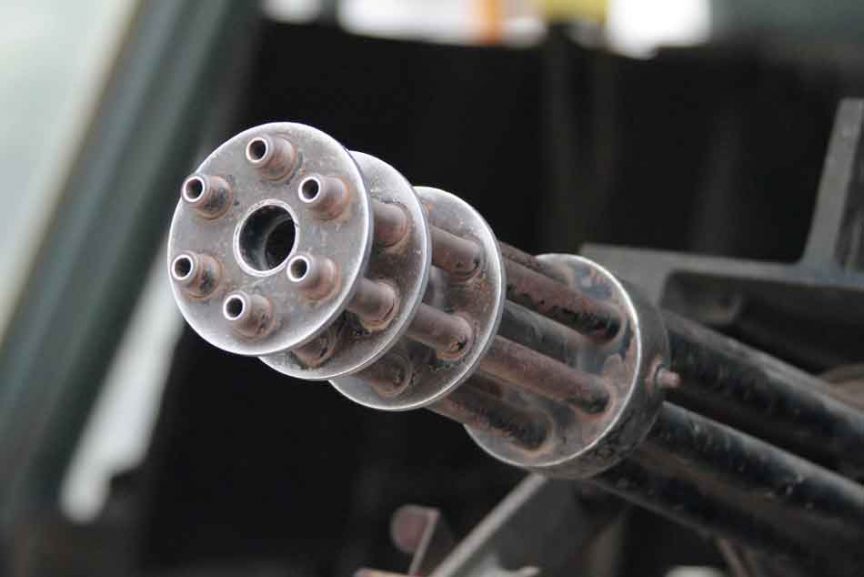 The word “minigun” is confusing since considering its size with respect to regular rifles. A deep dive into history shows a different definition of “guns” than what we’re used to. With that in mind, why is it called a minigun?

The term ‘minigun’ often refers to the M134 minigun used by the U.S. Navy and the U.S. Air Force that is aircraft mounted. It fires 7.62mm caliber ammunition and is referred to as the ‘minigun’ with respect to the M61 Vulcan cannon it derives from, which fires 20mm ammunition.

Do you want to know more about the minigun and what it’s capable of? Let’s jump right in.

Does Minigun Stand For Anything?

A gun is a pistol, semi-automatic rifle, or any other type of firearm among civilian gun users. 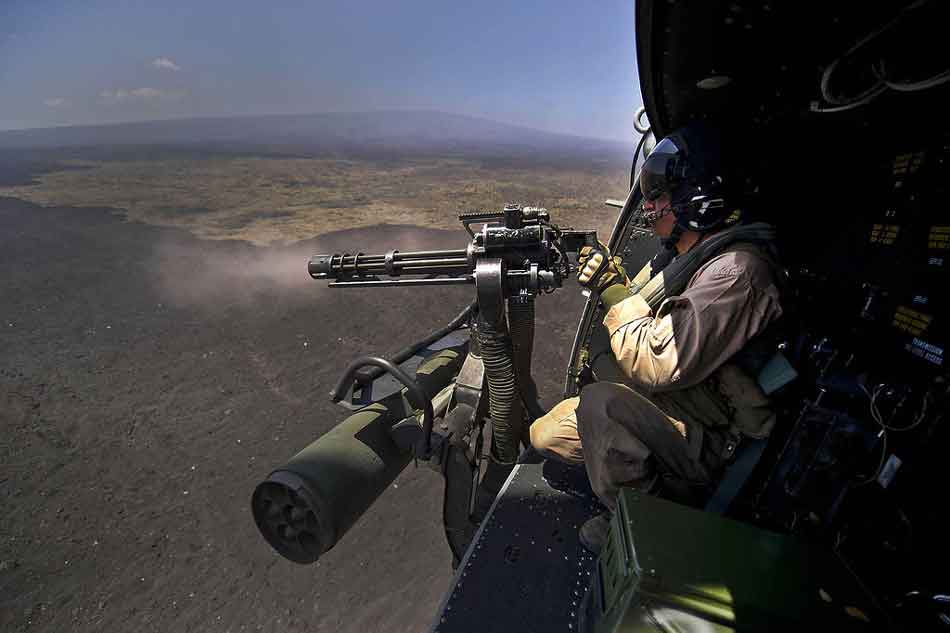 But this is not the case in the Military. The name “gun” is frowned upon in the Military since it refers to a mounted weapon. They refer to small firearms as “rifles” and small pistols as “sidearms.”

Guns are the pieces of artillery you’ll find in aircraft, ships, or any other vehicle. I

t’s only recently that we started referring to small firearms as guns. Therefore, the word “Minigun” was coined since this gun is smaller than the vehicle-mounted weapons.

One might ask why it’s not referred to as a mini-cannon. It qualifies to be a gun since it uses rifle ammunition and not autocannon shells.

What Are The Minigun Specifications?

It’s also a machine gun that features 6-barrels and a Gatling-style rotary mechanism.

Rotary guns rotate the barrels to maintain a certain fire rate, which gives them an edge over single-barreled rifles. Another distinctive feature of miniguns is the external power source, which is usually an electric motor.

It feeds through linked ammunition, but it also has a delinker, ensuring the cartridges are fed into the barrel flawlessly. Several variants of the minigun are in use in all branches of the US Military and other militaries all over the World.

You’ll find them mounted on helicopters and surface ships.

Although some handheld miniguns are depicted in the media or film, they may not always be realistic since a minigun is quite heavy and requires an external source of power.

There’s a handheld version, the XM556, which fires the 5.56 NATO. But it’s currently not in use in the Military. 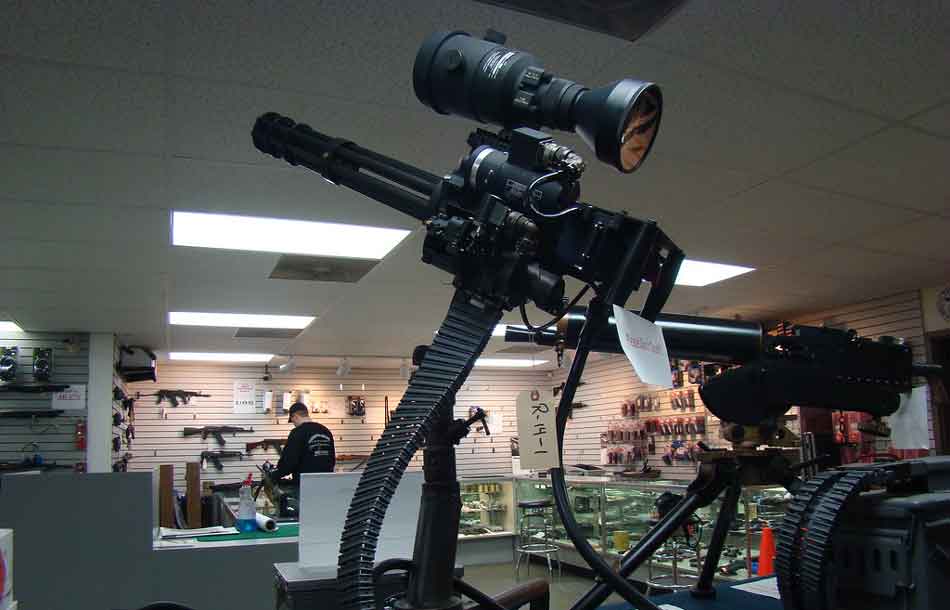 What’s The Rate Of Fire For A Minigun?

The rotating barrels ensure such a high rate of fire without overheating.

Another reason a minigun has a high firing rate is that the barrels are usually at different firing stages. When one barrel ejects a bullet, the second barrel is preparing to discharge, and the process takes place simultaneously.

Electric motors power most miniguns, but some variants can be gas-operated, hydraulic, or pneumatic-operated. 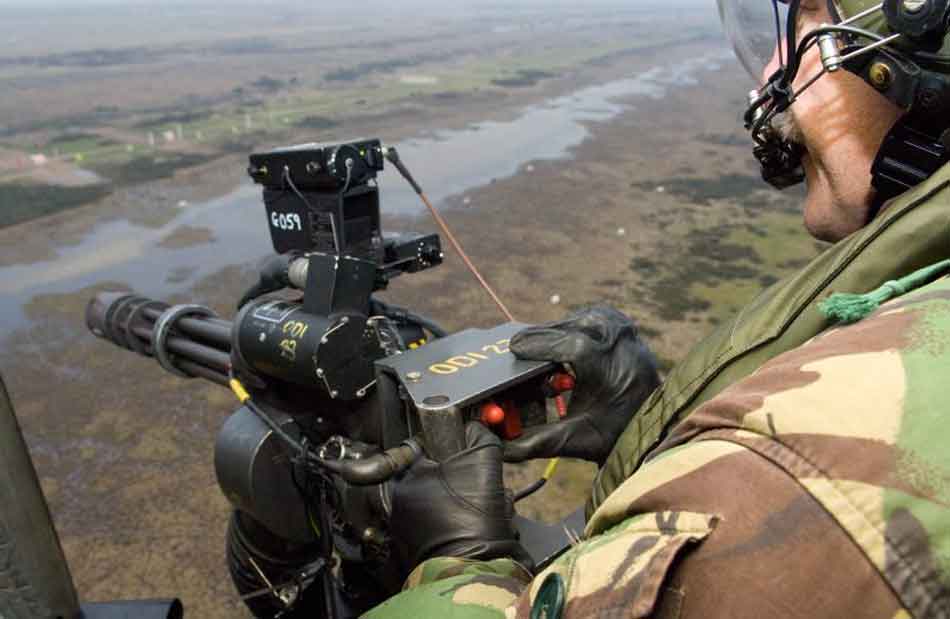 The Gatling gun inspired the minigun, GAU series, and the M61 Vulcan.

It was operated through a hand crank. It still had six barrels, but some variants had up to 10 barrels. The feeding of the cartridges into the barrels was through gravity. The first Gatling gun was introduced in 1861 and was chambered for 30-06 cartridges.

Who’d want to be on the receiving end of that?

Secondly, the Gatling gun isn’t exactly automatic since the soldier had to rotate the crank for it to fire. Either way, it revolutionized warfare in the 20th century.

The minigun gets its name since it’s smaller than regular “guns.”

It’s an awesome weapon no matter what way you look at it, and to see one firing is a truly deafening experience.