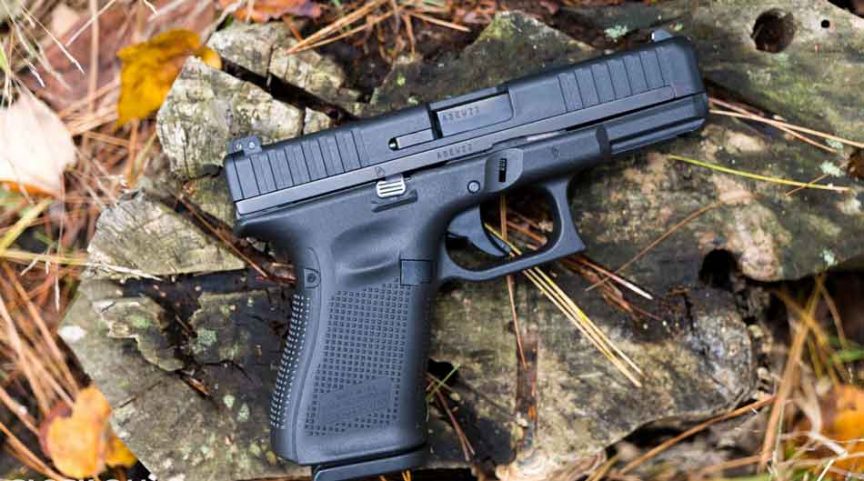 There are many fine pistols, and even in the unusual pistol caliber of 22 LR, there are some good automatics, like the Walther P22Q and the Ruger SR22.

But Glock has a very impressive background in forearm production and many like the Glock brand of reliability.

The Glock 44 comes in the 22 LR caliber and is their only pistol that fires this ammunition. It’s a good weapon for a beginner, training, or fun plinking as it is the size of normal Glocks. The Glock 44 has been noted as having issues with ‘out of battery’ firing.

Glocks are an extremely popular brand of handgun in the US, both in civilian use like recreational shooters and the police, and the military alike.

Because of their popularity, various companies and eventually Glock started producing 22LR conversion kits to change the caliber of the weapon. 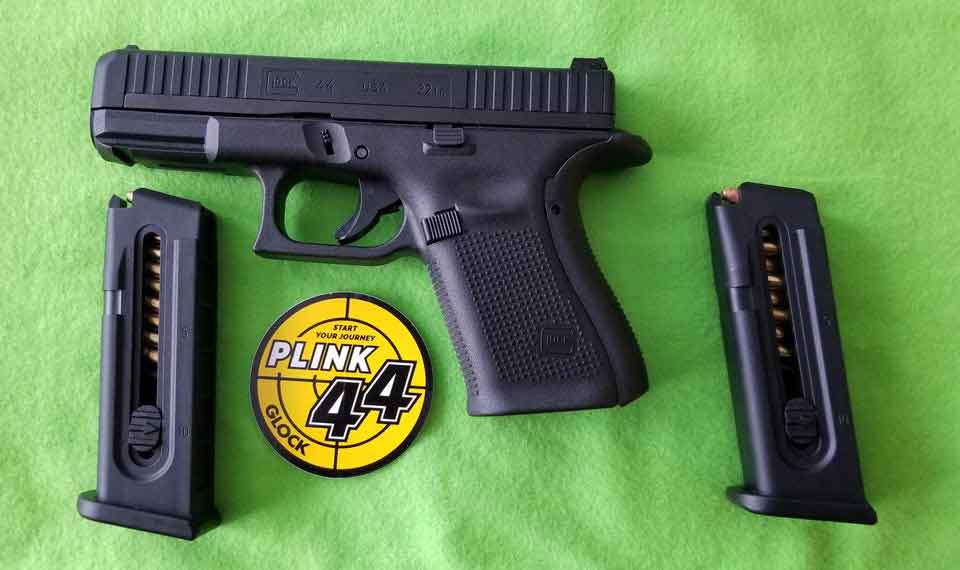 Changing a 9mm caliber weapon to fire the lower powered 22LR cartridge may seem counterintuitive but there can be many reasons, such as wanting a plinking pistol, or a training firearm. 22LR ammo is a lot cheaper so the hobby becomes a lot less expensive with a 22LR pistol.

The Glock 44 is Glocks first exploration into a rimfire pistol, so as to make the popular caliber an addition to their range.

Unlike other Glock models, the Glock 44 had a less than smooth roll out into the market. This was their first foray into the 22LR market, and social media was quick to give their opinions.

It’s fair to say there was some concern among some shooters about the weapons safety issues and reliability..

Is The Glock 44 A Good Weapon

So with known issues is the Glock 44 a worthy little 22LR?

Well, a good point to make first is that the Glock 44 is the same size as a normal sized firearm, like a Glock 19. A lot of 22 pistols can be different dimensions, so as a training weapon, or as an assisting weapon you will be familiar with the size, grip and weight. It also fits in normal holsters.

Unlike a great many 22 pistols it has a polymer and steel slide. Usually, a 22 cartridge doesn’t have the power to push a slide back when firing so manufacturers use less than satisfactory metals, like aluminium or zinc, but steel is more durable.

As Glock have patented materials for firearms, they’ve used that to their advantage and the slide is much better quality than most.

The barrel does not come threaded, but Glock will sell you a threaded barrel as an upgrade, although the threads aren’t the most popular 1/2×28 thread rate. An adapter may hace to be used. Really? Yep.

The trigger is a normal Glock trigger, so if you like Glock triggers then fine. If you don’t then there’s no change for you with the Glock 44.

A wide variety of people have seen good accuracy with the weapon regardless of the ammunition. Good ammunition should produce a group of about ¾ inch with standing at 10 yards. Cheaper ammunition might be around 1 ¾ inches in the same firing position.

Most shooters seem to suggest that the CCI Mini Mag produces good and reliable ammunition for the Glock 44. 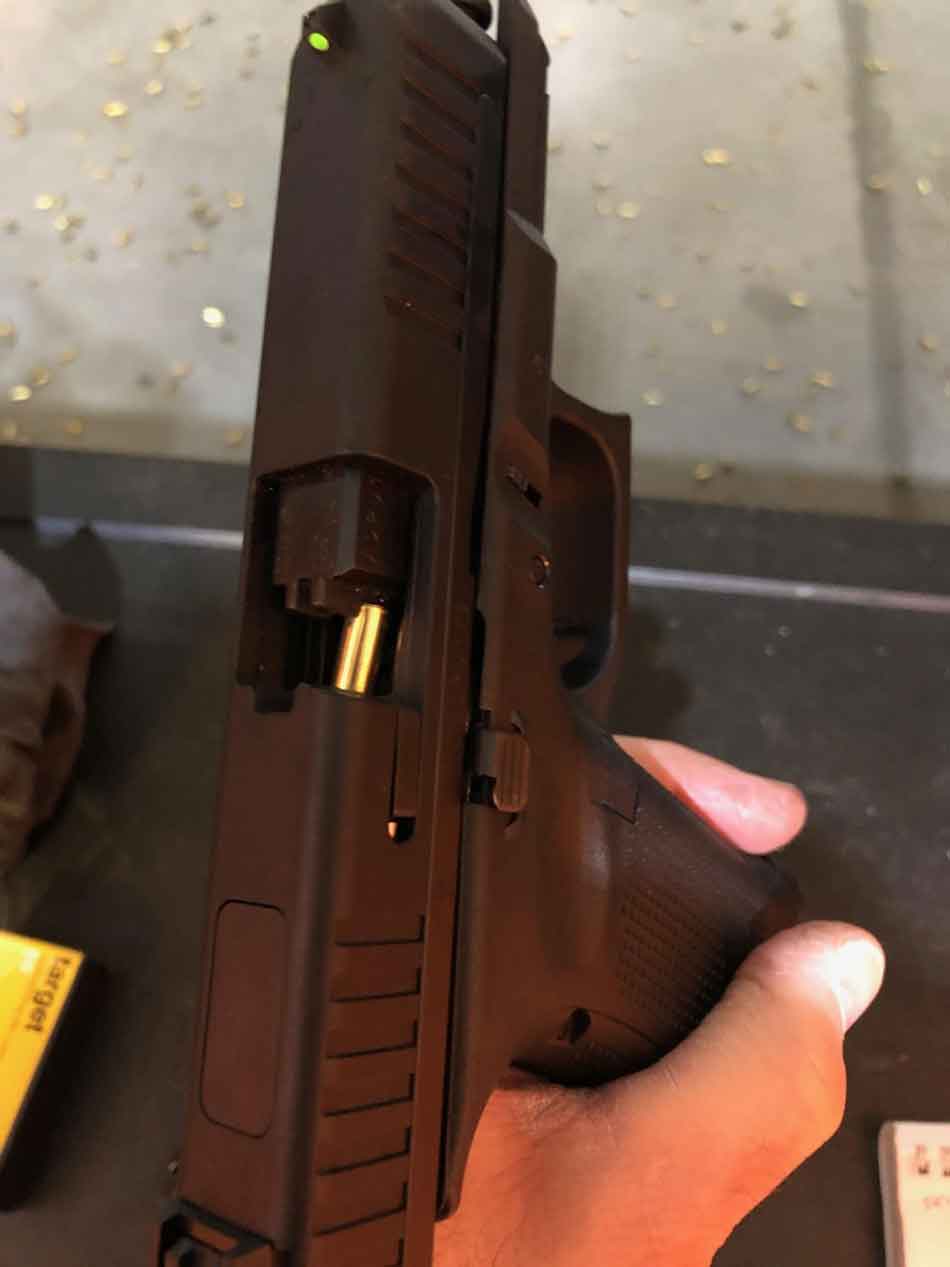 While many shooters will tell you there Glock 44 shoots extremely well, I think it’s fair to point out that others have expressed issues.

Many shooters have put 1000s of rounds through their Glock 44 with no complaints so it’s not like the weapon is wholly unreliable.

Still, there have been a few reports that have made the rounds on social media. Some reported that their magazines needed to ‘bed in’. That’s certainly an unusual problem, as without it the first round of a new magazine doesn’t collect properly and significant feed issues were experienced suggesting the magazine spring might be a bit weak.

You may need a few hundred rounds through a new pistol in order to ‘work through’ the problem.

However, they are not the only issues that have been commented on about the Glock 44. Some have seen their slide crack.

The most common problem seems to be that it will fire out of battery occasionally with suspected wear on some internal parts. Some have seen their extractors break.

The Pros And Cons Of The Glock 44

So, the Glock 44 seems to be an accurate weapon but it does have some issues that are known and reported. No doubt Glock will address these with later releases.

It appears to be that as a fun plinker, a training gun until you become more accustomed to firing a weapon or a general beginner gun, then the GLock 44 will be a good choice. No-one is going to fault you for it.

For practice in range drills, rather then firing practice it could also be a good choice as 22LR ammunition is considerably cheaper than 9mm and the weight and feel of the weapon is the same as a bigger caliber firearm.

While it’s good for training, it’s important to point out that this 22LR pistol probably won’t let you experience recoil. 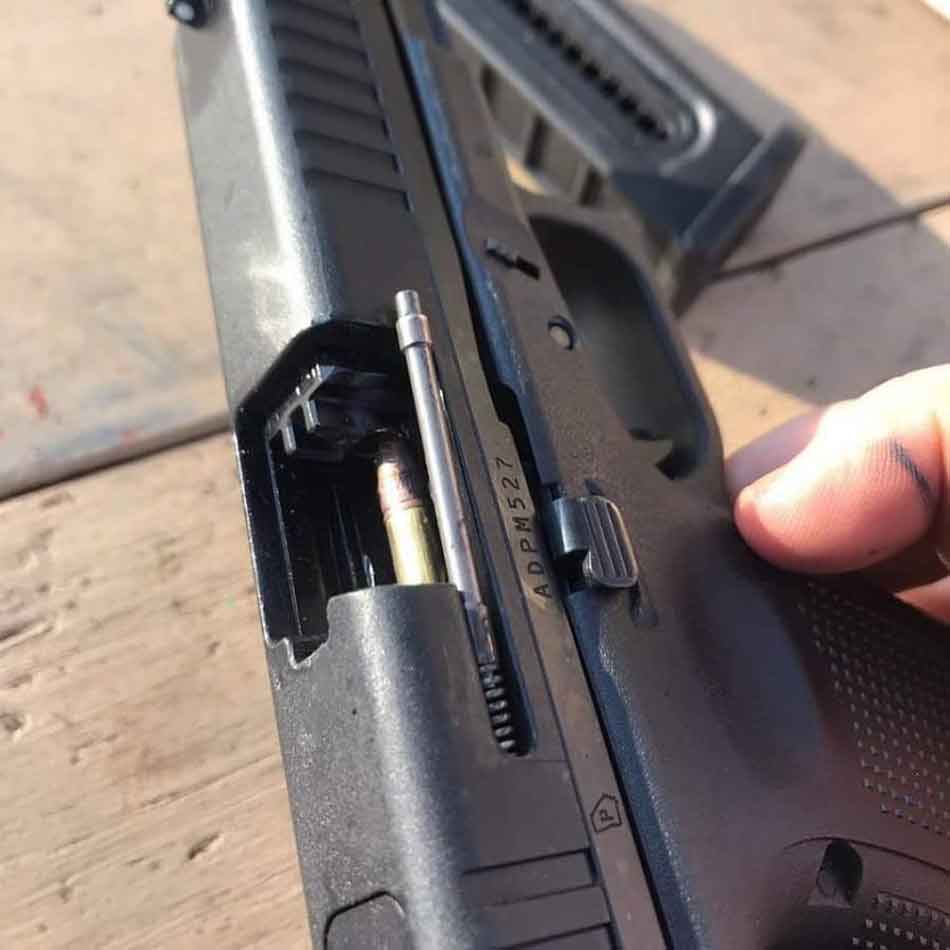 It’s more than good enough for a reasonably accurate shooter to put in ¾ inch groups at 10 yards, which is a likely range of an armed intruder so it’s an effective weapon for self defense. Two inch groups at 25 yards can be achieved, so it has Glocks experience to put the rounds where you want them.

That said, it does seem to come with some issues. It’s not yet been fully resolved, so could just be a quality control problem rather than a flaw in the weapons design. Well, let’s hope it’s not a problem with the weapons design or manufacture.

So buyers took to social media to vent their frustration at the Glock 44 woes, with even a critical malfunction of the slide cracking. Only one incident of that happening has been noted though.

The biggest problem is the ‘out of battery’ firing, but presumably, Glock is working on that. A stronger spring could be used, but maybe a 22LR cartridge can’t recycle through the rounds with that solution.