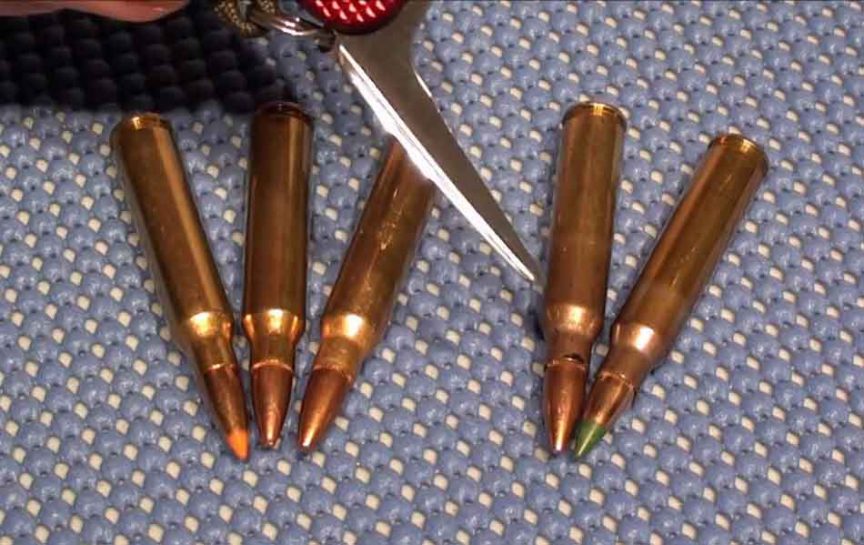 Calibers can be confusing enough as it is. Range, power, muzzle velocities, stopping power and ballistics are all qualities of making the right decision of selecting a round.

An extremely popular choice is the 556 round. It comes from NATO dimensions and there is a civilian version to reflect that popularity.

Which then makes for an interesting question, with a variety of terms, what’s the difference between 5.56 and 5.56 NATO.

The term 556 in a civilian environment usually refers to .223 Remington round. 223 and 5.56 NATO have similar dimensions, but they have different chamberings and have different pressures. The .223 was designed for hunting and other civilian usages, while the 5.56 NATO is designed mainly for military usage. 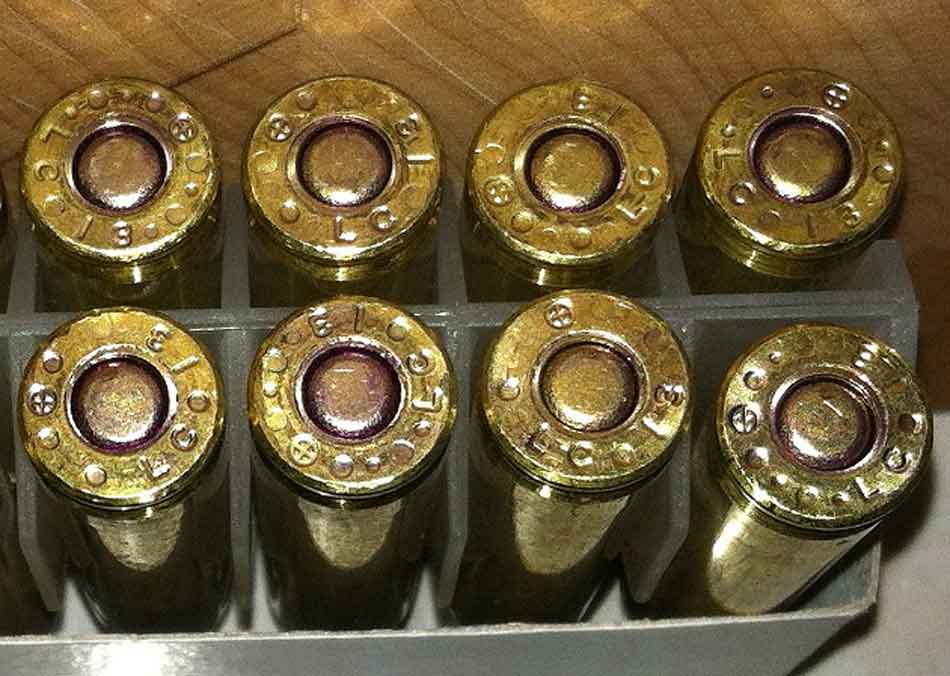 Find out the critical differences between the .223 and 5.56 NATO, and how you can safely use each.

Often, when people talk about the 5.56, they are usually referring to the 5.56 NATO.

The .223 was first designed in 1957 as a rifle cartridge for commercial hunting.

The U.S. military also tested this cartridge when they took over the Armalite’s AR-15 to develop the M16 rifle. The U.S. Military later designed a 55-grain full metal jacket of the .223 for the M193.

The .223 was upgraded to a 62-grain full metal jacket designed to cause more damage. This updated version is the 5.56 * 45mm NATO we see today.

The .223 was designed as a request by CONARC (U.S. Continental Army Command). They were looking for a bullet with supersonic speed at 500 yards, .22 caliber, a 20-rounds magazine, penetration of the U.S. military helmet at more than 400 yards, accuracy and ballistics similar to the M1 Garand, for a rifle that weighs at least 6 pounds.

Remington Arms, Fairchild Industries and several other engineers were involved in achieving this goal.

It also comes in different weights and varying velocities and strengths, with the pressure ranging from 55,000 psi to 62,366 psi. 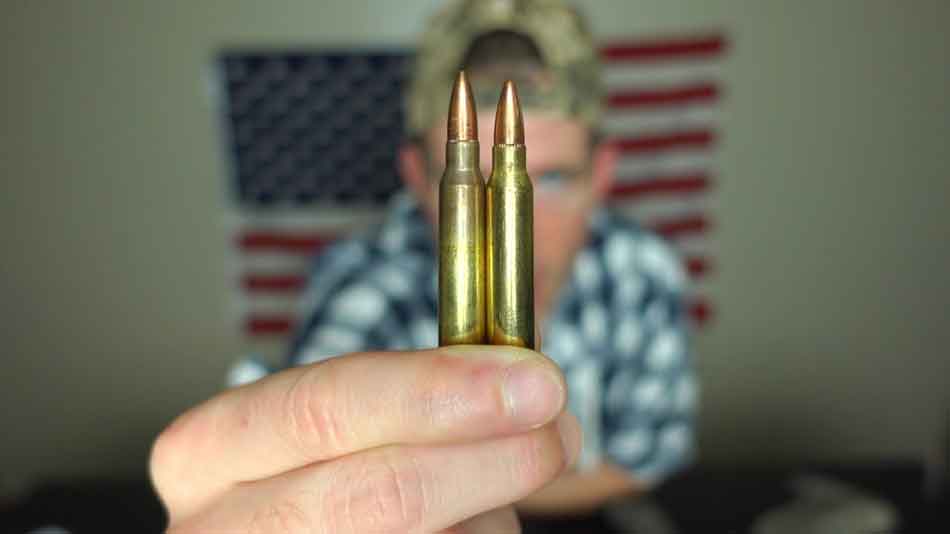 Even though it was inspired by the .223, they have some considerable differences, as we’re going to discuss later in the article.

Even though the 7.62 is larger and more powerful, it has powerful recoil, which made it difficult to selectively fire using the service rifles.

They had to replace it with a lighter, yet powerful cartridge. Currently, it consists of the SS1121, SS109, and SS110 rounds.

When used in actual battles, the 5.56 NATO is known to have a lot of penetration and even cause a lot of damage to the human tissue. It’s designed to have a stable flight and impact a lot of hydrostatic shock, causing internal damage to the soft tissues.

In a battle, it’s not necessarily designed to kill, rather perversely. A wounded soldier often takes 3 to 4 other soldiers out of the battle as they tend to their fallen comrade.

However, the velocity of the bullet depends on the length of the barrel. If you’re using a shorter barrel, you may not achieve the ideal velocity to cause such damage.

Besides penetrating human tissue, ballistics tests have shown that it can penetrate 12mm into steel, even at 110 yards 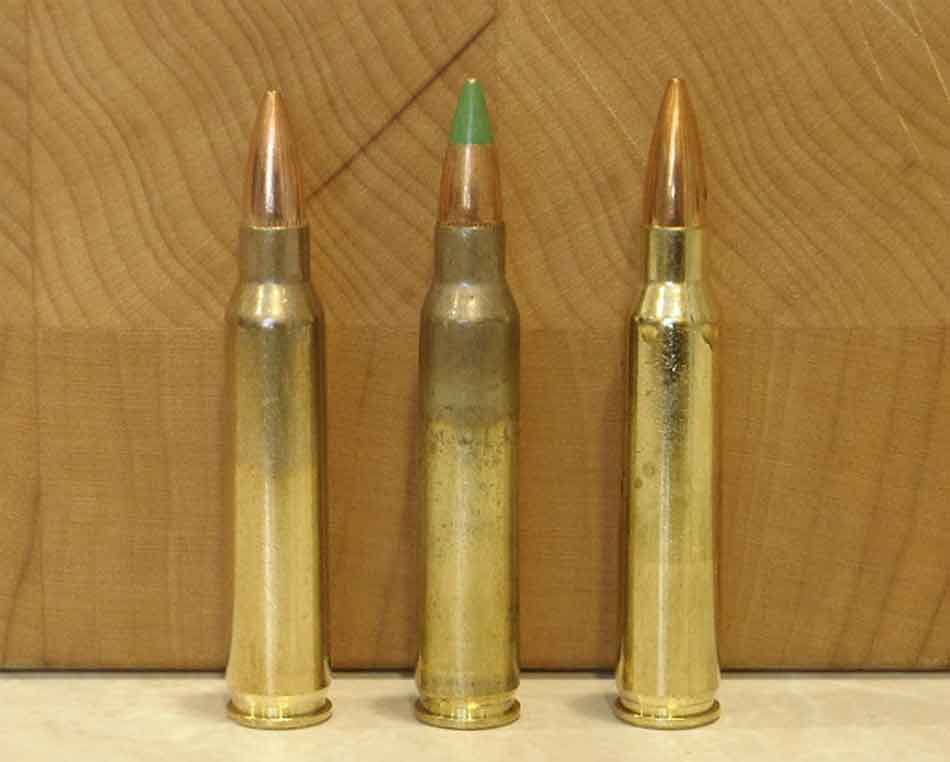 Even though .223 and 5.56 NATO looks similar, and you may find rifles that can fire both of them, they are different.

For instance, they both have the same capacity, but the 5.56 NATO has a thicker case, which allows it to handle high-pressure chambers. .223 has a shorter throat and a steeper angle than the 5.56 NATO.

The steeper angle and shorter throat increases accuracy, and pressure, but reduces the velocity. These specs are ideal for sporting activities. 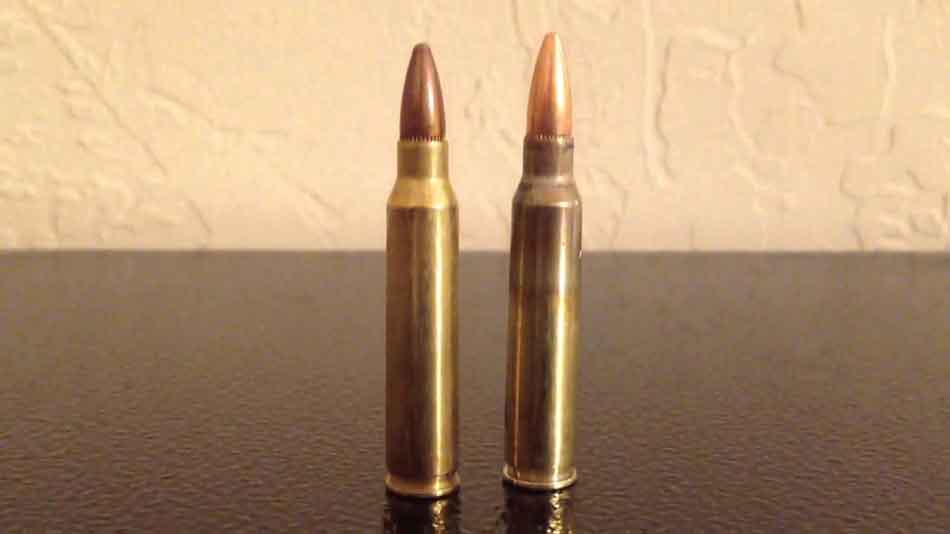 The .223 Remington is often just labeled as .223 REM, and in some cases, the manufacturer’s name.

Most of the 5.56 rounds have a stamped ring at the primer. This design was added by the U.S. Military to prevent the primer from backing out when firing a fully-auto rifle in battle. The .223 doesn’t have this crypt pocket.

You will see a NATO stamp on the cartridge.

As mentioned earlier, these two cartridges have similar dimensions. The main differences are the chambering and the pressure from both of them.

The .223 rifles’ chambers have a smaller loade and steeper angle to enhance accuracy at the expense of velocity.

The 5.56 NATO chambers have a larger loade and shallower angle to increase the velocity at the expense of accuracy.

These two cartridges also differ in terms of pressure. The testing may differ since the .223 is mainly a sporterized cartridge, while the 5.56 NATO is standardized for warfare.

You can easily interchange the two rounds for a rifle designated for the 5.56 NATO.

The chamber 5.56 chamber can handle a lot of pressure, and the .223 has less pressure. But some users claimed that firing the .223 on the 5.56 chamber reduced the accuracy of their shots.

But this seems to be determined by the rifle you’re using.

However, firing a 5.56 NATO in a rifle designated for the .223 could be dangerous.

It causes the primer to jump out of the pocket, ending up in the rifle’s internal parts, damaging the rifle, or even injuring the shooter.

If you’re not sure if your gun is a .223 or 5.56 chamber, you can always check at the barrel side. Most manufacturers have labeled the rifles at the barrel, or the receivers.

You can also consult the seller.

Essentially, unless you are sure your firearm takes 556 NATO, don’t put the round in one that takes 223 Remington.

To be honest, the .223 and 5.56 NATO brings about a confusion that could have been avoided.

They are pretty much the same; the only difference is the pressure and the chambering.

The dimensions, looks, and designs are identical. If they created a universally acceptable cartridge, it would have been better.

The difference between the two cartridges may be small but it’s important to know the difference.

The NATO cartridge also has a longer throat so more powder can be loaded, so you will get a bigger muzzle velocity from the round. That’s why it’s crucial to know if your barrel is capable of handling the round.