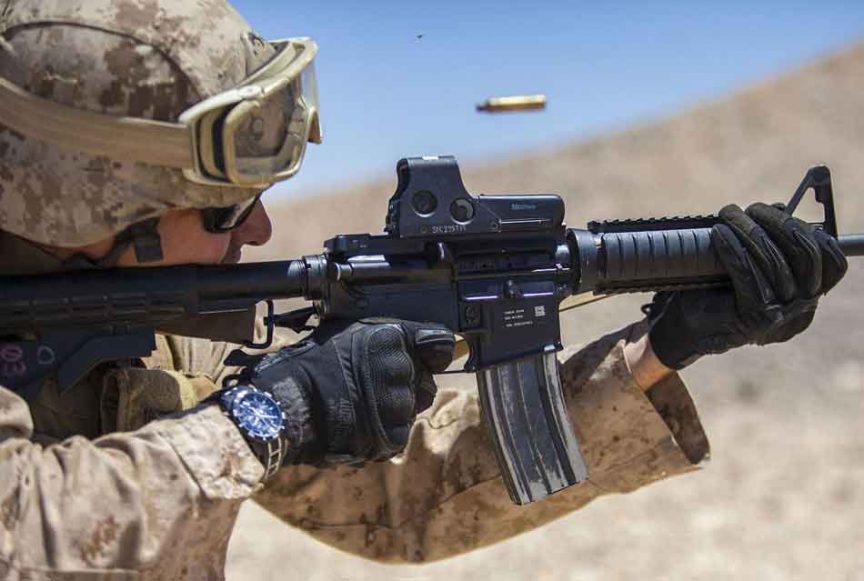 What Do the Military Look for When Choosing a Sight Optic?

The task of selecting a sight optic is a difficult one. There are many options to choose from. Besides classic red dot sight which is used for shooting in the short distance and rapidly there is also a scope that is magnified and used for aiming a variety of lengths.

The first thing that should be considered before mounting an optic gear is the distance between the person taking a shot and the object.

Secondly, it is good to know whether a person behind the gun has shooting experience or not. It is not about talent but practice. The more time one spends practicing, the more skillful he/she will become. Our advice to beginners is to choose the red dot sight since it will come in handy when aiming. It will be easier for them to shoot the target with the red spot as it eases the aiming process.

Sight gear should be mandatory for any firearm. The military chooses it according to quality and efficiency. When life is at risk, no one wants to have lousy sight gear. We can select red dot sight according to the rifle we own as there are different types of it for various firearms. What also should be considered during the purchase are the facts where and when the shooting will take place.

Since military use, their firearms in all types of weather conditions and on all kinds of terrain ruggedness for the red dot sight should be fit even for the harshest conditions. The optic gear must be functional no matter the circumstances. The battery life of this type of equipment is very long; for example, some of the producers claim that the battery of their red dot sight is up to five years. 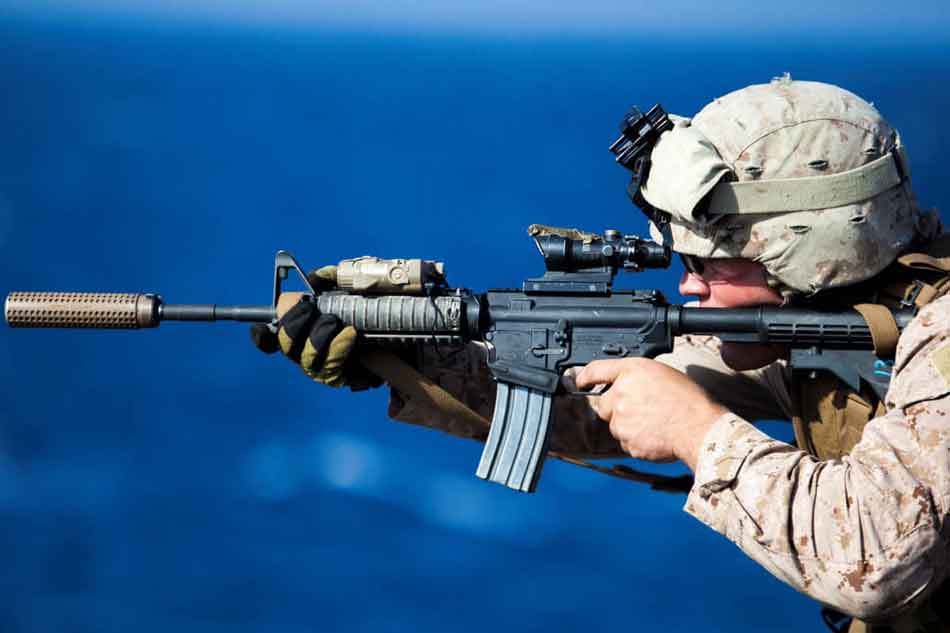 Why the Military Needs Those Qualities

For civilians the most straightforward optic gear should be enough since in case they ever need to should, it is considered it would be for self-defense reasons or to hunt animals. The main thing that civilians would consider is how easy it would be to aim with their rifles.

On the other hand, the military will search for perfect precision concerning red dot sight.  Soldiers can’t allow themselves to miss their target, and that is why they look for accuracy and precision. Moreover, the gear they use should be adaptable to both long and short distance shooting.

The army needs high-quality red dot sight during combats as soldiers need to see their target at great distances. Weather conditions may be harsh, but the equipment should resist it. Waterproof should be the main feature of the optic gear as it may be soaked with rain, but it should run properly. The military needs best qualities since if there is a failure with a red dot sight, then the loss might be huge.

Do All Units Use Sight Optics?

All military units that carry firearms use sight optics if otherwise isn’t regulated by the standard operating procedure. The units that use machine guns in most cases don’t use any sight optics. Their goal isn’t precision but to produce a rain of bullets on the enemies. In military terms, it is known as suppression fire.

The advancements in the weapons industry are huge and can’t be neglected. Nowadays there are even red dot sights for pistols. The importance of precision in aiming the target is widely recognized since life may be put to danger. The most important mission is to destroy the enemy and avoid losses at all costs.

Regarding iron sights, they may come in handy during training sessions. They are cheaper, lighter, and provide a soldier with decent point shooting reference. We may freely say that iron sight is perfect for beginners.

High-quality sight optics is very expensive. Some units can’t afford it to their soldiers, so in those cases, they probably use iron sights. Even some of the units that use sight optics always have iron sights as a backup if things go wrong with their primary gear.

All units that require precise shooting use red dot sights. The newest version of it comes with LED lights and can even be upgraded with magnifier for better precision at long distances. It seems that with recent advances in optics, it becomes a mandatory part of the equipment for firearms and even for pistols.

Further, CQB is an acronym for Close Quarter Battle, which means that the enemy is in your immediate surroundings. These types of forces are in the greatest need of red dot sights as it allows them to aim the enemy quickly at short distances

Regular marines and airmen can go perfectly fine with an iron sight. If we consider the fact that sight optics may fall and break and it is expensive, then the iron sight will be the best choice. It can’t break, and what is most important it won’t be affected by heavy rain or downpour.

All units that have M4 and AR-15 firearms as part of their weaponry require red dot sights. There is a range of various producers for optical gear for these two models of rifles. Soldiers that are involved in force on force shootings have the most need for them as they will have to aim and shoot fast. 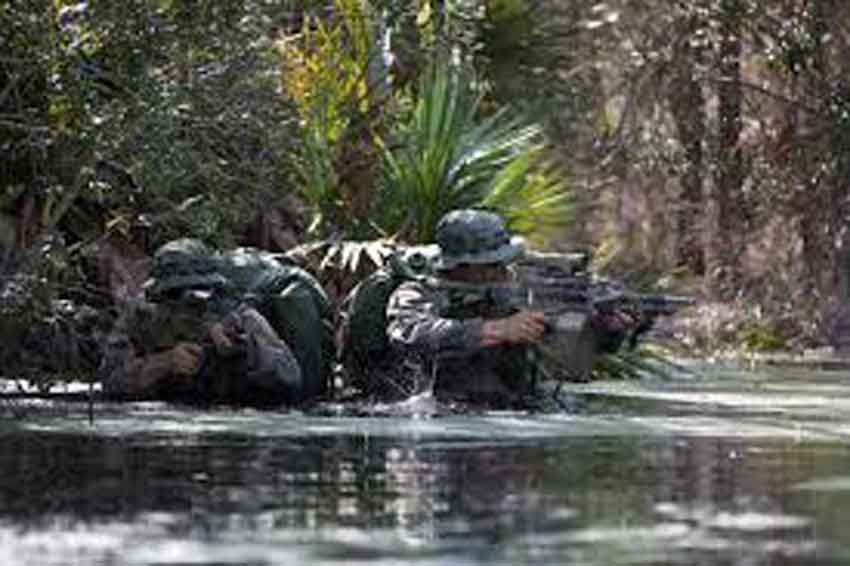 What Sights Do the Special Forces Use?

Special forces use ACOG optics as well as red dot sight. Among the popular ones are Trijicon and Aimpoint as well as EOTech. What distinguishes what type of sight optics the unit will use is the type of mission they needed for.

Companies in the weapons industry are competing, which one of them will provide the soldiers with the best quality optics gear. It can be a decisive factor in most of the force on force shooting. The failure of the equipment can lead to fatal losses, and that should be avoided at all costs.

WHY ARMED FORCES LIKE NAVY SEALS USE RED DOTS

Navy seals operate in all types of environments as their name says. Their warfare capabilities are challenging, and well beyond the ones of a standard soldier. Since they are involved in risky operations, they need high-quality sight optics for their weaponry. It is of utmost importance to stay out of risk, and it can only be handled with expensive equipment.

Special forces like Navy Seals are often part of dangerous missions that can end in loss. They need perfect precision while aiming at the target. Besides accuracy, speed is also essential in risky situations and force on force shooting. They can risk the entire team if they don’t use the best equipment there is.

CAN THIS BE CUSTOMIZED?

In some of the units, the choice of sight optics is open. It means that every member of the unit can customize his/her firearm according to his liking. Still, he/she should pay utmost attention, whether that customization isn’t risky or of bad quality. There is always a default array of weapons along with the sight optics, and a soldier can stick with them without making any customization.

The advancements in the weapons industry provided the military with the most effective firearms and pistols. Instead of iron sight, soldiers now have an array of sight optics at their disposal to choose from. The more powerful gear, the fewer the losses. The precision and speed of aiming will decide the winning side in most of the missions.

The military forces feel more confident when they have weapons customized with red dot sights. Even going to a force to force shooting is less stressful when they know that they are ahead of the enemy thanks to the best sight optics such as EOTech, ACOG, and Aimpoint.