Among the shotgun sports, like sporting clays, and skeet shooting is the popular trapshooting. The newcomer to any sport faces confusing questions related to their hobby.

So it’s the same with those for shotgun sports, leading many to ask basic questions, like what exactly is trapshooting?

Trapshooting is a shotgun sport involving 5 stations. Competitors fire 5 shots at each station before moving onto the next. Each shooter will be scored out of 25 for each round. The shooter’s position is 15m behind the trap house and targets are fired front and rising.

There are also skeet shooting and sporting clays that compete for the attention of shotgunners. Broadly speaking you can break it down as follows.

Clay pigeon shooting – This is the general term used to be used as an umbrella term to describe any sport utilizing a shotgun to take clays out the air on a flight path. It can also be abbreviated to clay shooting.

Skeet shooting – This is performed recreationally all the way to the Olympic level. Shooters move to several stations on a concave angle to a fixed trap firing position so that each station offers a different clay angle from the shooters perspective.

A competitor will move between around 7 different stations along a specific arc. At each station, two clays are fired on known trajectories and speeds, and the shotgunner has to hit both of them. The competitor then moves to the next station until all stations have been fired from.

Originally the shotgun styled sports were with real animals in the late 1700s. Pigeons were ‘trapped’ under a device and suddenly released.

While artificial birds were developed in the mid 1800s, with clay birds being developed towards the end of the same century, the start of trapshooting developed as a method for those participating in the sport to get much needed practice.

Gradually the use of clay targets became more prominent until it developed into the sport it is today with the original terminology still being used. Clays are still referred to as clay pigeons and the automatic throwers are housed in ‘trap houses’.

Today the sport is widely acknowledged around the world but is much more predominant in Canada, the US, and Western Europe.

For the US, they have two independent governing bodies that ‘oversee’ the sport.

The Amateur Trapshooting Association (ATA) conducts events throughout the continental US, and even in Canada on occasion.

For specifically the West coast of North America there exists the Pacific International Trapshooting Association (PITA).

While typically an ‘over and under’ style of shotgun is used for Olympic events, for recreational trap, different styles and gauges can be used.

However, trapshooting is normally done with a 12 gauge given the very defined distances. Each round of trapshooting you can have presented to you either a single or a double clay bird, so most people opt for the 12 gauge over and under.

While any type of shotgun may be used for recreational and fun shooting, even those with a single barrel for the single clay rounds, it’s fair to say that a double barreled over and under specifically designed for trap shooting is the preferred choice for the more serious shooter. 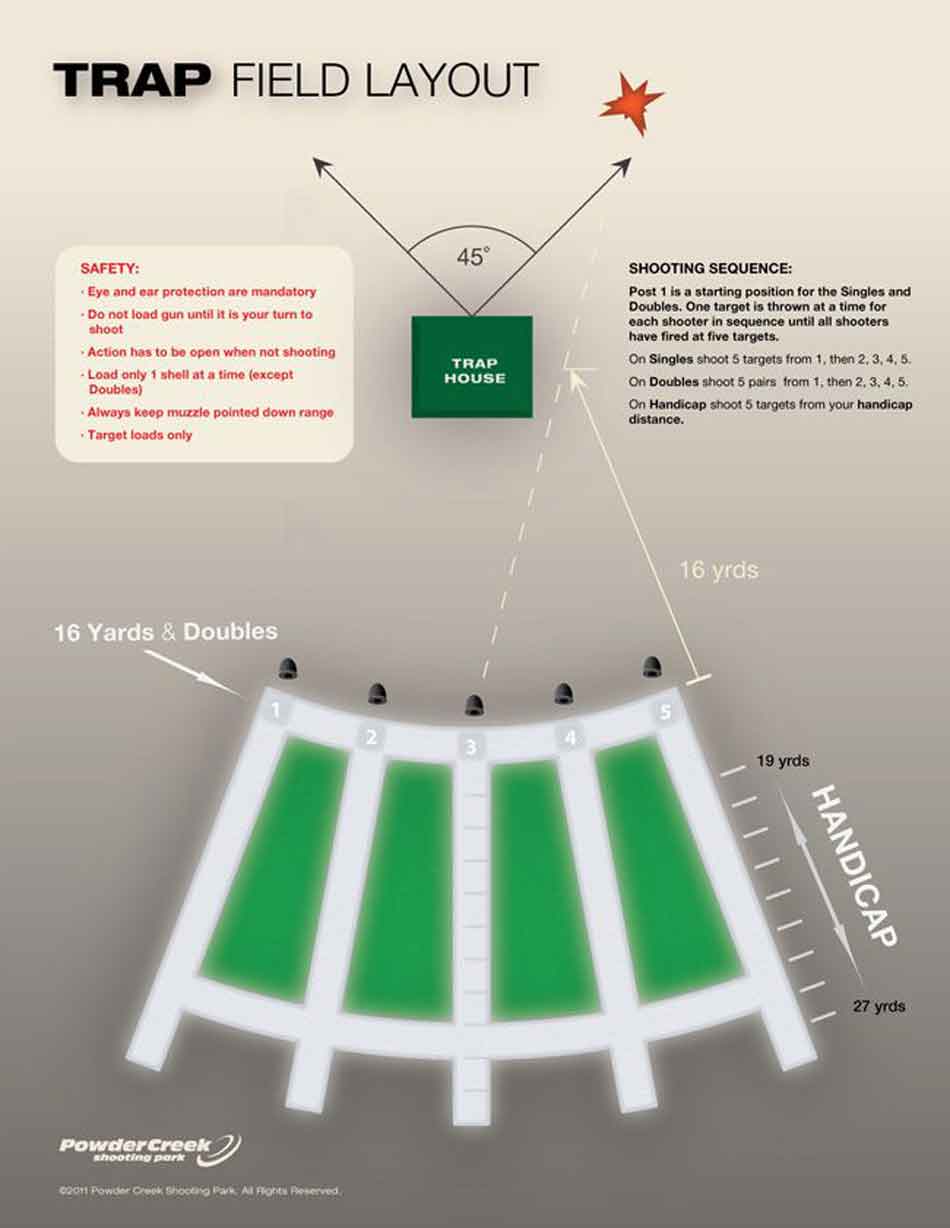 Pump-action shotguns and semi automatics are designed with a different purpose in mind, typically home defense.

A specifically manufactured trapshooting shotgun will be an over and under double barrelled with sights that are more conducive for taking a clay out of the air while it is on the rise.

The modern clay bird that are fired into the air are 11cm in diameter, and 3cm in height and are unsurprisingly made of clay, which makes them about 3 ½ to 4 ounces in weight. They are exceptionally brittle and are prone to snapping so don’t drop a box.

That’s good though as a single 12 gauge pellet will chip or shatter it making the successful hit easier to see and thus score.

How A Round Of Trapshooting Is Shot

Basically, with a typical over and under shotgun a competitor is going to stand at a station and fire at clay pigeon form a trap house and hit clays on the rise in whether single or double presentation.

The pitch, angle, speed, and trajectory are all permissible to be altered. The clay will be moving away, so quick target acquisition is advised. 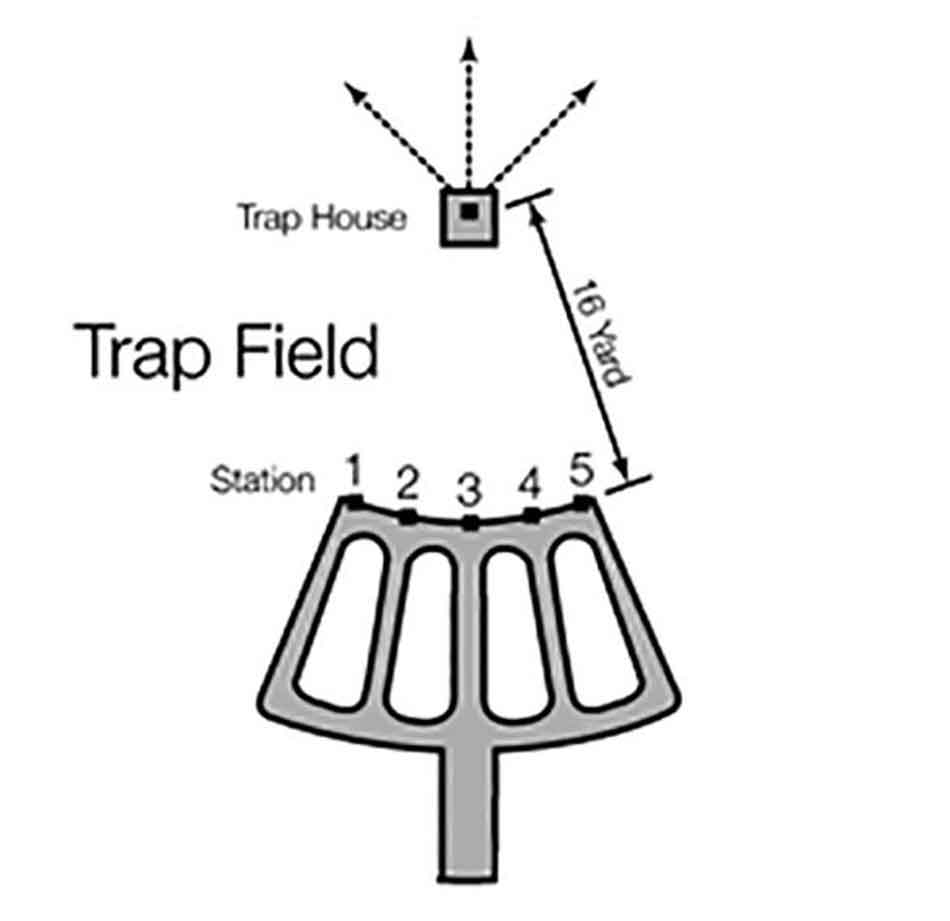 Whether you are in competition or are recreationally trapshooting, there are 5 stations on an arc around the trap house.

For each round, you will have 5 shots at 5 stations making a total of 25 shots.

If you are team shooting, the team stays at the station until all members have fired their 5 shots, before moving on to the next station.

In a competitive event, it’s likely a team will contain around 5 members, so each shooter will shoot 5 cartridges at station 1. Thus the team as a whole shoots 25 cartridges, but each individual will have shot only 5. The team, and other teams, then move onto the next station, until all teams, and all team members have s shot 5 cartridges at the 5 stations.

It is entirely possible to shoot a round on your own for practice, or with a friend recreationally. 5 shots each, then move around the arc.

A competitive event will more than likely consist of many rounds, not just one trap house so an individual shooter may put up to 200 rounds down the range at clays in any given competition. 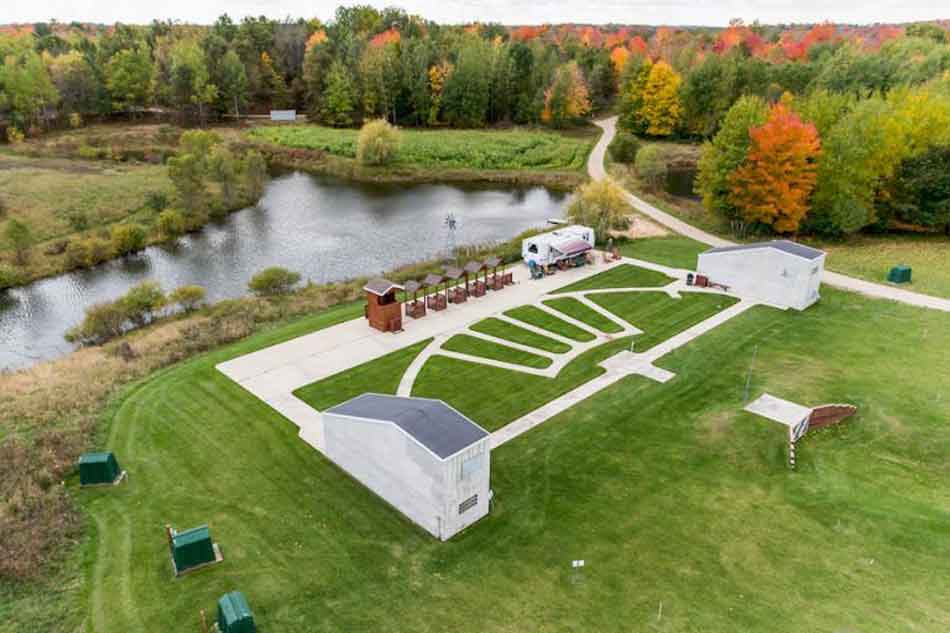 A typical trapshooting field has the 5 shooting stations all 15 meters back from the trap house producing a small arc of firing stations.

The targets when he says “pull” are fired into the air with a clay thrower and are moving away from the shooter. The angles, speeds, etc are unknown to the shooter.

How Does Scoring Work In Trapshooting

Each shooter will have a card that is split into 5 sections. Each section then is further subdivided into 5 boxes.

The chole scorecard line represents each of the 5 shots at the 5 stations, totaling the 25 shots that will be. 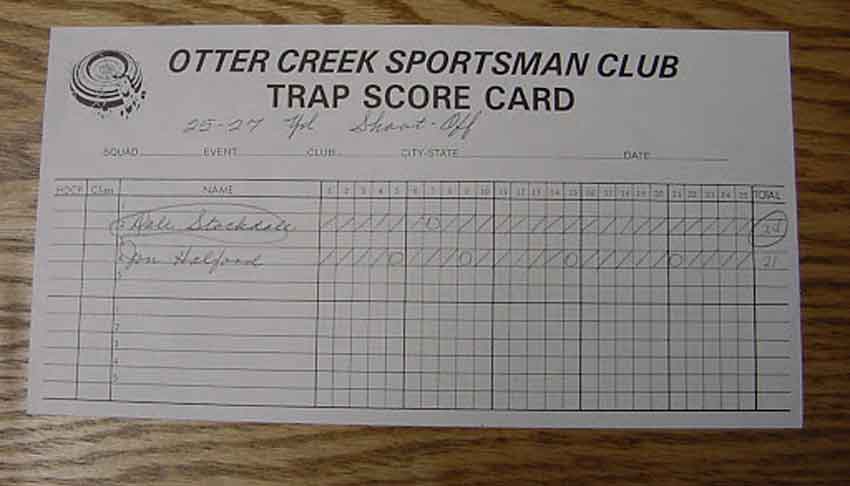 As a shooter enter the stations shouts ‘pull’ and fires at the clays they will either hit them or miss.

A slash (\) is marked for a broken or hit clay and a zero (0) is marked in the appropriate box for a missed clay.

A hit clay is defined as a fully shattered clay or if a piece breaks off.

Then each shooter has fired 5 shots at each station his card for that will look something like \\\0\ which indicates they hit all the clays but the 4th one.

At the end of all the rounds, each shooter will have 25 marked scores and the number of hits is totaled up. Often if only a few have been missed it’s easier to count the mises back from 25.

For example, if there are only three 0s on the card three misses equal 22 hits out of 25.

Is Trap Shooting An Olympic Sport?

Yes, trap shooting has been an Olympic event since 1900.

It can be known as International trap, bunker trap with variants like ‘down the line’.

For years men and women competed together but in 2000, women and men were separated into different events.