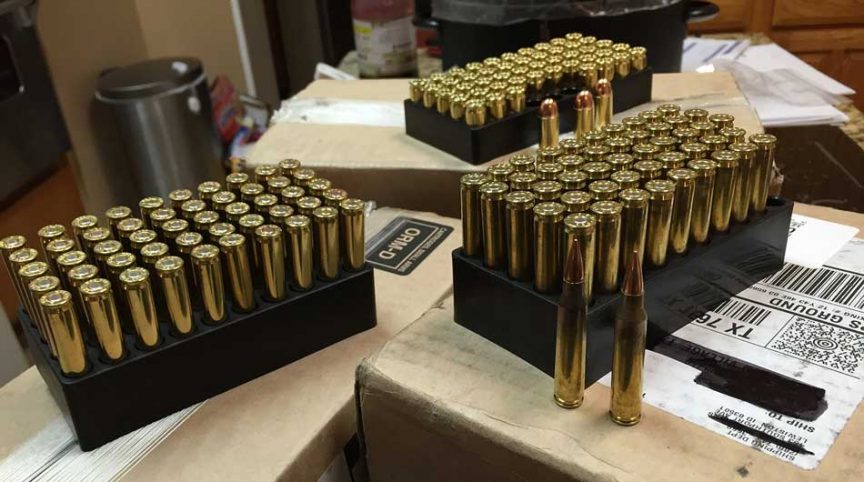 The .223 round is popular among AR rifle fans, as well as other semi-automatic rifles users. Along with 5.56, it makes a large proportion of most modern sporting rifle calibers.

While bullet grain is an often talked about topic on the range, most barrels are made for a specific grain of round, sut what is the heaviest .223 grain bullet?

The heaviest .223 bullet is the Atomic Hunting Ammunition 223 Remington at 112gr. It is a  round specifically designed for hunting. Tactically there is the Ascendance International at 110gr and the Extreme Shock Covert Ops Subsonic Ammo at 100gr.

50gr to 64gr are the most commonly used in law enforcement, hunting, and personal defense, but the heavier ones are effective in specific applications.

As an average most shooters will be firing a bullet grain of 69 gr to 77 gr for their preferred .223 round.

Bullet grain, if the topic is new to you, is the specific weight of the bullet, not the whole cartridge’s weight which would include the rim, base, and primer.

It’s not. Indicated as “GR” in ballistic tests and ammo boxes, it refers only to the bullet’s weight.

Just like in other cartridges, there are a plethora of .223 rounds to choose from. Below is a list of some of the most common .223 rounds, their bullet grain, and muzzle velocity.

The 36, 38, and 50s grains appear to be the most common rounds since most rifles have a twist rate that can stabilize such weights.

The muzzle velocity also depends on the type of round since the 38 gr Winchester Varmint X does have a slightly higher muzzle velocity than the Varmint Grenade despite being heavier.

Below are some of the heaviest .223 rounds

The heaviest grain .223 bullet is the 112 gr Atomic Hunting Ammunition 223 Remington specifically designed for hunting. The round is designed to tumble and wound at short distances, hence the lower muzzle velocity.

For 2gr less, there is the Ascendance International with a muzzle velocity of 3240 fps.

Then there’s the Extreme Shock Covert Ops Subsonic Ammo, and despite being more than 40% heavier than the .223 standard bullets, it still maintains a high muzzle velocity. This bullet is longer than the standard .223 bullets and was designed for covert special operations.

But it still loads into standard AR rifles.

Ballistics tests showed an average of 2450 fps muzzle velocity before the bullet hits the target.

Therefore, this bullet has excellent penetration, and it fragments, causing more damage to the internal organs. But it’s only comparatively effective at short range. 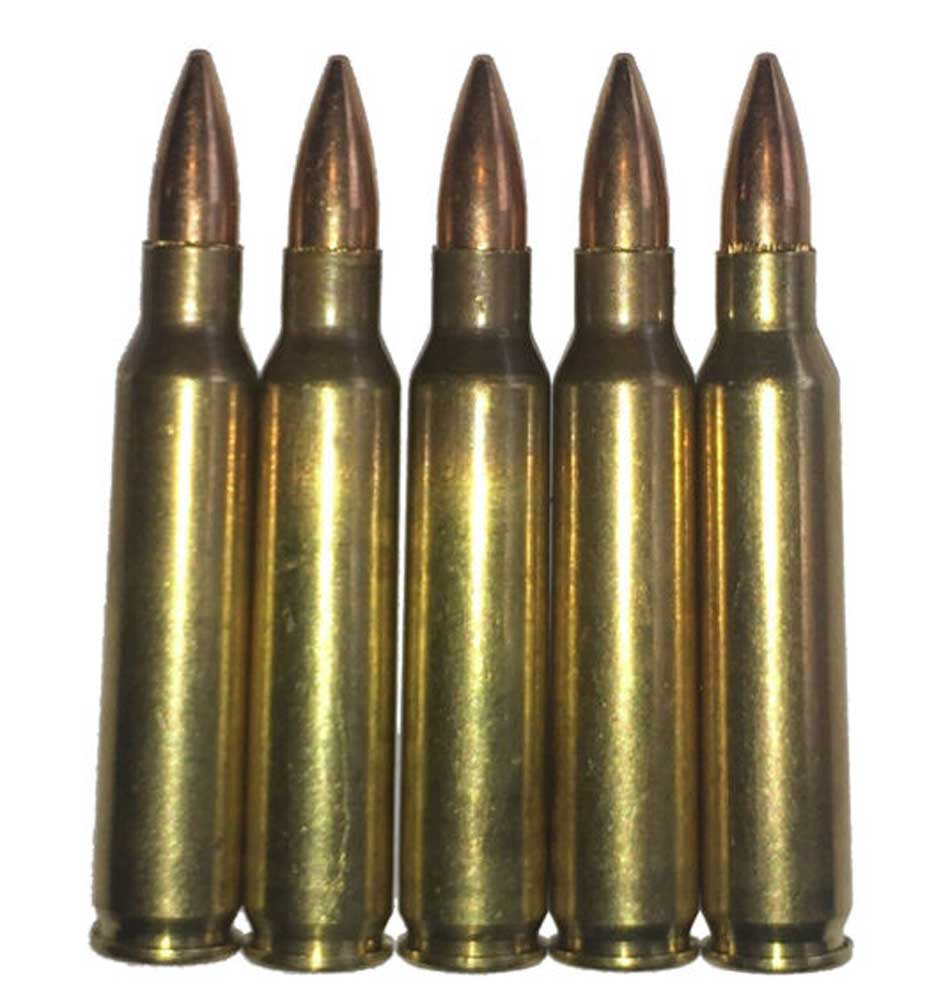 The Effects Of A Higher Grain Weight With .223 Ammunition

It’s often challenging to predict the effects of changing bullet weight, but you can rely on chronograph tests from sites like Gundata.org or even tests from the FBI and other law enforcement agencies.

Generally, a higher bullet grain leads to higher recoil and a lower point of impact. This is because higher recoil causes the muzzle to flip, landing the bullet further away from the target. But this often happens if you don’t change the muzzle velocity.

But based on the rounds we showed above, they all come at different muzzle velocities.

On the other hand, the lighter bullet will maintain the projectile, but they may not have as much penetration. But the recoil is often manageable.

It’s up to the shooter to test by shooting a couple of groups and observing how they behave. To maintain accuracy, the shooter should maintain a tight and uniform grip when dealing with all bullet grains.

Another essential aspect to consider when changing the bullet weight is the rifle’s twist rate.

The twist rate is the rate in which a bullet spins in the barrel. It’s often indicated in inches. For instance, if a rifle has a 1:10 twist rate, the bullet will turn once in every 10 inches.

But for 1:9, 1:10, and slower twist rates, it’s challenging to shoot heavier bullets. This is because they may not effectively stabilize the bullet.

A 1:9 twist rate works best with 69 gr bullets or lighter ones.

The most commonly used .223 rounds range between 36 gr and 60 gr. The 112 gr Atomic Hunting Ammunition is the heaviest and most lethal .223 in the market today in terms of grain at short range. It is a round specifically designed for hunting though.

For a bit of fun, I went to Gundata and picked a 223 Remington and picked the same round. I changed the muzzle velocity and bullet grain to reflect the Atomic Hunting Ammunition 223 Remington ballistics data.

I got this graph. 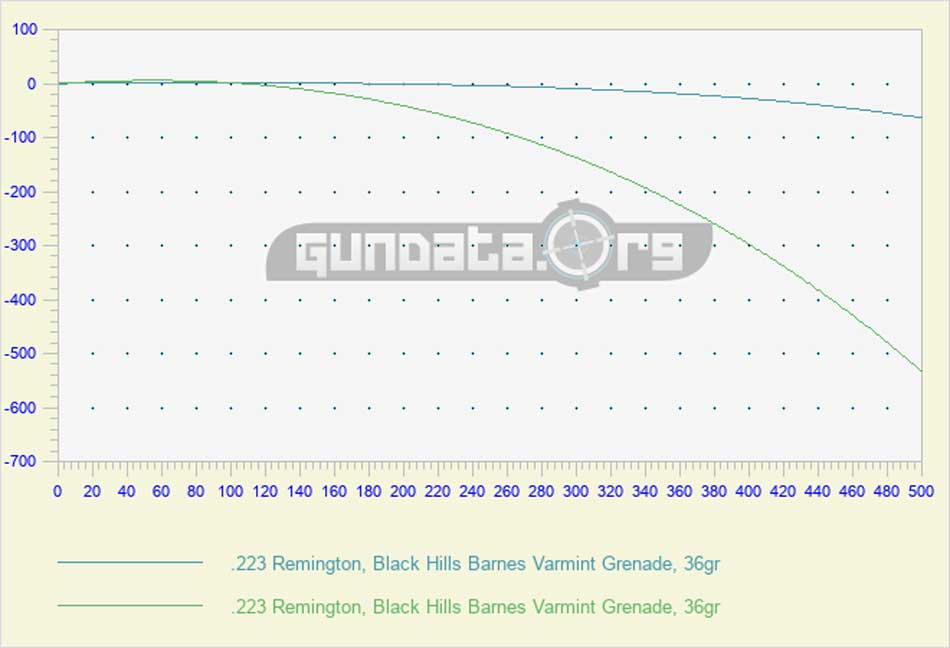 That’s quite a difference but does reflect the purpose of the round, namely hunting.

When I changed it to the 110gr Ascendance International I got this graph with the comparison. Up to 100 yards you are fine, it seems. 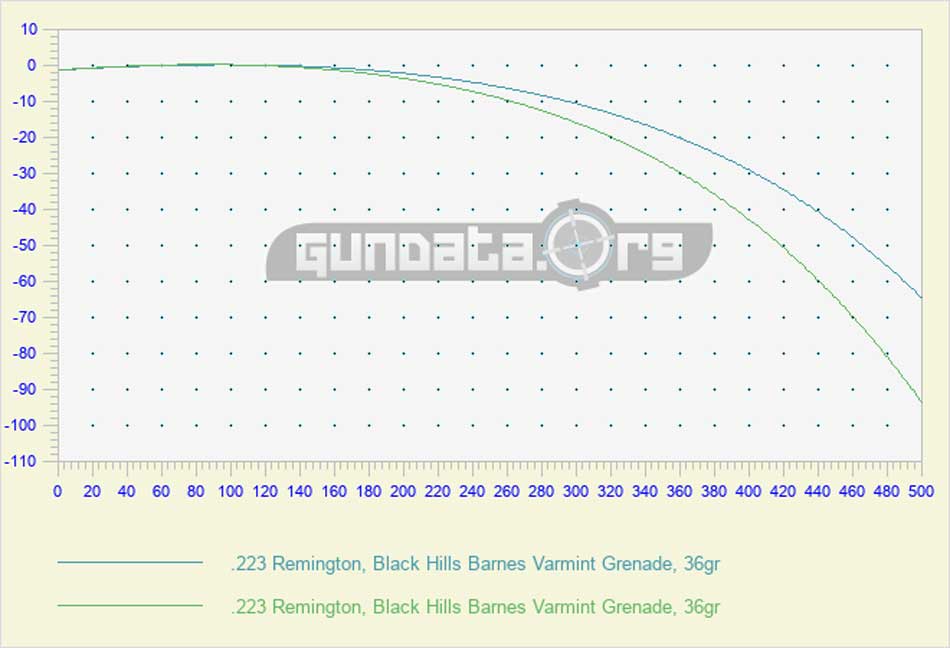 So a heavy grained bullet really isn’t much different to 180 yards.

The 100 gr .223 was designed for the US Military’s special operations due to its stealthiness and excellent stopping power.