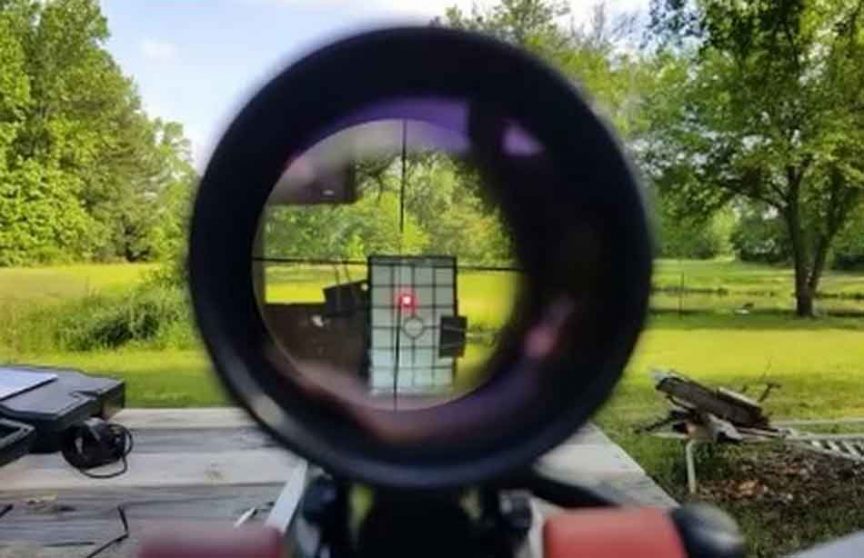 Upon putting a scope on a rifle there can often be a lot of frustration and confusion trying to get those rounds landing precisely on target. You can start at a very short range and gradually increase the distance.

However, you can try boresighting, but is you’ve never heard of it before, what is boresighting?

Boresighting a rifle is simply the practice of aligning the scope and the barrel to ensure you make more accurate initial shots. It’s the precursor to accurately zeroing the scope to avoid necessary shots. It involves looking through the barrel and adjusting the scope to the same focal point. You can also use a laser sighting device.

We have covered some of the basics of boresighting and how you can get the most out of it.

How Does Bore Sighting Work?

Bore sighting is the process of aligning your rifle’s barrel with the scope.

It saves you a lot of money and ammo since you will have a higher chance of always hitting the targets after this process. It involves viewing through the barrel and through the scope to make sure they both aim at the same point.

The gun should be fixed in position during this process. Whatever your preferred method make sure the gun is stable and firm.

Next, make sure you can see the target through the barrel. You can then place a target at around 25 yards away, and try to adjust the barrel and scope until they both aim at the center of the target.

You can now test with live ammo and shoot at the target, then move it further away and repeat. Once you’ve done it at around 25 yards and it’s accurate then going out to a further distance, you will know at least your rounds should be near the aimed target.

If you’re not sure how to view through the barrel, you can opt for laser sighting. A laser bore sighting device makes it easier for you since the laser is a direct line of sight from the barrel to the target.

It’s designed to aim at the center of the target. All you have to do is adjust the scope so that it aligns with the laser’s dot. The laser is where the bullet will go, so you can adjust the scope as appropriate.

Even though it’s often applicable in rifles, boresighting can also be done on handguns that have a scope.

Is Bore Sighting Necessary – Do You Need To Do It?

Now that you know how boresighting works, you may be wondering whether it’s really necessary.

Well, it’s not necessary. You can still shoot live bullets downrange and keep adjusting the scope until you effectively align both the barrel and the scope.

But shooting downrange is time-consuming and expensive, especially for beginners. If rounds don’t land on target, you might wonder why.

Boresighting simply gets your first shots somewhere on target, quickly and effectively.

Remember, you have to shoot a group of rounds to understand how exactly your rifle sights and how to adjust it. Even though you don’t have to do it, bore sighting can save you a lot of money and time.

You get to shoot fewer rounds, and you will have more success at the shooting range and during hunting.

Besides being cheaper and time-saving, bore sighting is also quite accurate. Viewing through the bore and adjusting the scope is effective since once you boresight the rifle at 25 yards, you will easily adjust it for 100 yards, and you will just shoot a few rounds.

Laser devices, on the other hand, are more accurate. Instead of relying on your eyes, the laser dot guides you when adjusting the scope.

However, some people argue that boresighting doesn’t match actual firing. That’s true to some extent since when shooting live ammo, you have to factor in recoil, type of round, and rifle type.

But after boresighting your rifle, it will be easy to adjust after you shoot a couple of shots since it’s already aligned. The distance of the scope from the barrel is also another factor to consider.

Boresighting is not a replacement for accurate scope zeroing. It’s simply the precursor to scope adjustment.

What Distance Should You Boresight A Rifle?

The most common distances for boresighting a rifle are 25 yards and 100 yards.

Once you have set up the rifle, place a target at 25 yards. This distance is recommended because you can easily see the target.

Also, you will be able to zero-in your gun for 100 yards. It’s advisable to make a large orange dot or any other mark that’s visible.

After boresighting, you can shoot your first shot. If you hit the target’s bullseye, well done. Your boresighting is excellent.

What this essentially means is that if you scope a target at 25 yards and the round is 1 inch below the aiming point then it naturally places the target as ‘dead on’ at 100 yards.

The reasoning behind this law is the distance between the scope and the barrel.

If you’re using AR rifles that have a scope-barrel distance of 2.5 inches, aim for a 1.5 inches low at 25 yards to hit the 100 yards target.