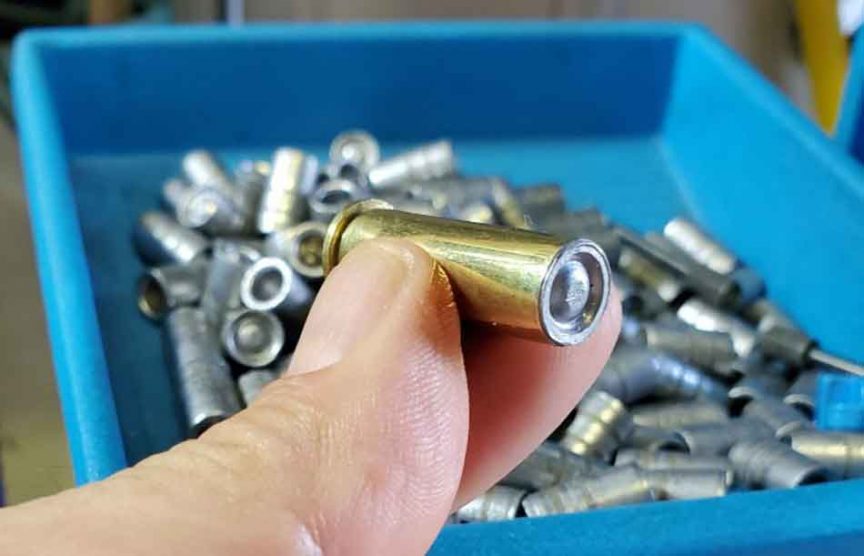 If you spend some time in the shooting range or shooting competitions, you may have come across this rare but specialized bullet but didn’t realize it’s a good option for you. So briefly, what is a wadcutter?

A Wadcutter is a unique bullet that’s defined by a flat nose as the bullet tip, flush to the bullet casing, the lead not being visible from a side profile. They are often used for shooting short-range soft targets. They are usually made of lead, and unjacketed.  They can be popular in self defense because of their lower velocity and short range lethality,

This article outlays everything you want to know about the wadcutter bullet. Let’s get down to it.

So What Are Wadcutter Bullets?

Wadcutter bullets are unjacketed and usually loaded such that the bullet is enclosed in the case. Some wadcutters have flat bases while others are hollow.

The most noticeable feature of these cartridges is the full-length casing, which extends from the top to the bottom. The design practically hides the bullet allowing you to view it only from the front.

This round cylindrical bullet features a flat front with the side entirely enveloped by the casing. Since the round is not jacketed, the lead is left exposed. As a result, the bullet is fired slower than a typical bullet to prevent clogging the barrel with lead.

The flat front curtails aerodynamic, meaning the round will prove frustrating while shooting target 50 yards away. Wadcutter rounds are, therefore, not an ideal choice for hunting. However, if you are a shooting trainee, these rounds will come in handy.

The low velocity ranges between 700 to 800 fps in full-sized gun and 500 to 600 fps in short barrel pistols. The low velocities reduce recoil significantly. The Short-range makes it an excellent choice for shooting practice and training.

On the downside, the low velocity and bullet shape reduces wadcutter effectiveness in self-defense sometimes. While a wadcutter shot can be fatal or cause severe injury, it can’t penetrate deep enough to hit an assailant’s vital organs, depending upon the caliber.

Wadcutter is not an option for semi-automatic owners. The atypical shapes make it difficult to load from a magazine and can cause malfunctions easily. The rounds are usually used in the revolver, which can accommodate most of the bullet types.

What Are Wadcutter Bullets Used For?

The ammo is designed for shooting close range cardboard or paper targets at subsonic velocities. The flat front creates a perfectly circular hole (wad). Even an overlapping hole is easy to see when a wadcutter is used, so you can see the shot results clearly.

This is clearly an advantage for shoots that are competitive in nature. 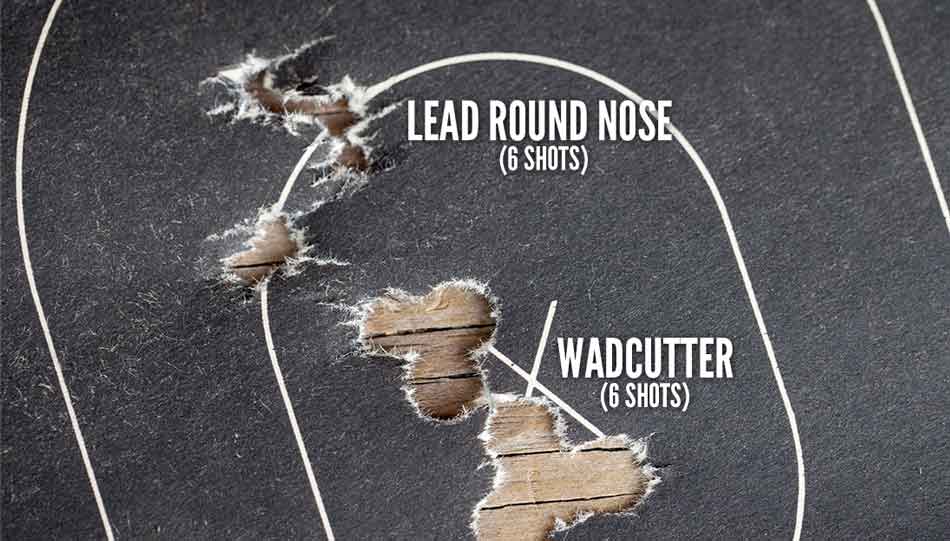 On the other hand, rounded bullets tear paper targets, making it hard to count the holes after the training session. Round nose and hollow-point bullets create a ragged hole with torn lines. Counting the holes becomes a daunting task.

The slow velocity of the wadcutter bullet reduces the recoil significantly, hence is suitable for people learning the shooting basics. If you need self-defense or hunting ammo, wadcutters may not be the most suitable option.

Semi wadcutters are a more desirable choice for hunting and self-defense.

Wadcutters are used in revolvers and specially designed semi-automatic pistols. The most popular caliber for wadcutter is the .38 Special. The ammo has a 770 fps and 148-grain load.

When in a .38 Special, full wadcutters is used is a small bullet. A decent .38 can easily take rabbits, coyotes, fox and grouse, and other small game.

Some of the wadcutter varieties that exist include Double Ended Wadcutters (DEWC), Semi wadcutter (SWC), and HBWC (Hollow Base Wadcutter).

HBWC is hollow at the rear end. They are suitable for shooting at the lowest velocities since heavy loads would split the rounds. One drawback of the HBWC is that increasing pressure and powder charges to boost velocity can blow off the bullet’s slid front from the hollow base. This mechanism leaves the base behind as a bore obstruction.

Semi-automatic pistols require special modification to feed full wadcutters. SWC bullet nose allows you to feed the ammo from the magazine to the chamber smoothly. The sharp edge and flat front punch a clear hole in the paper target.

What Is A Semi Wadcutter Bullet?

A semi wadcutter (SWC) round is essentially a cross between a normal round nosed bullet and a full flat nosed wadcutter.

Although every manufacturer has a slightly different take on it, the semi wadcutter bullet looks like a small cylinder with another conical cylinder placed on top. The cylinder edges from the lower half still protrude. 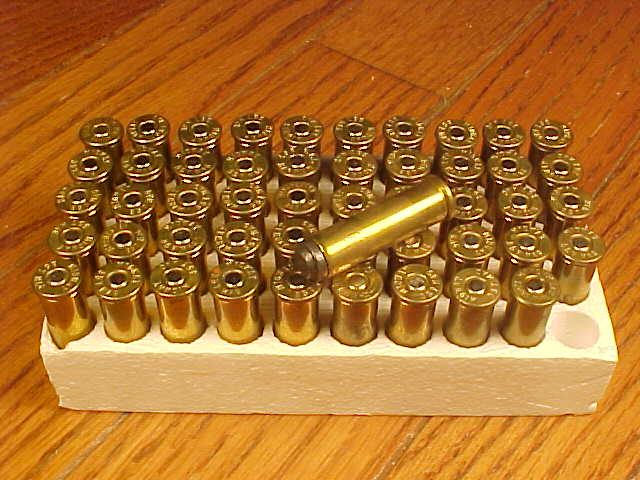 These edges are what cause the clean punctures in paper targets.

A semi-wadcutter is generally used in a revolver. The all-type bullet combines features of a conventional round bullet round and wadcutter target bullet. Feeding full wadcutters from magazines to automatics can be quite problematic.

Unlike a round nose bullet, a flat nose punches a neat hole rather than tearing the target. The sharp shoulders enlarge the hole neatly, enabling the shooter to make an accurate and easy score.

The conical design has less drag than a flat cylinder. Therefore, the SWC external ballistics are much better than wadcutters.

You can’t rely on using a wadcutter bullet in a semi-automatic pistol. The semi-wadcutters are preferable because of being more aerodynamic and cuts clean holes on paper. Their bearing surface is shorter than traditional wadcutters,

Semi wadcutters are more popular than full wadcutters and used in a cartridge for semi-automatic pistols and revolvers. It is also used in rifles for big game hunting and target shooting.

A semi wadcutter incorporates the benefits of the wadcutter bullet and eliminates the drawbacks.

Pros And Cons Of Wadcutters

Wadcutters are designed for training and competitive sports and does a great job at it. But the ammo is not without disadvantages. Let’s explore the advantages and disadvantages of the wadcutter bullet.

The flat shaped nose is the basic characteristic of a wadcutter. In combination with the sharp shoulder, this feature ensures the bullet cuts clean holes on the target. The holes that get made by wadcutters on targets are very different from the torn paper from a full metal jacket round.

Most factory wadcutters are designed with a low velocity, which translates to reduced recoil. For those beginning their shooting wadcutters offer an easy introduction to recoil so stance and firearm safety can be prioritized.

However, it’s not all pros, there are some downsides to using wadcutter bullets. 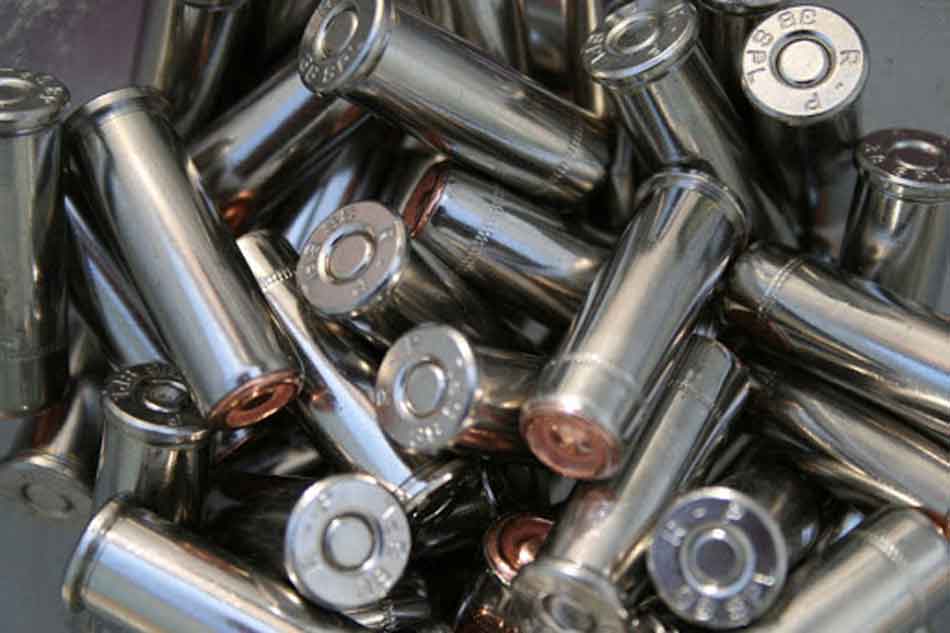 Unsuitable for Self Defense

The extremely low-velocity and bullet shape makes it unsuitable for self-defense. While Hollow base wadcutter tends to be relatively more effective, the overall performance is dismal.

But that doesn’t mean the bullet can’t kill. While a wadcutter shot can be fatal, the bullet is not reliable for self-defense. Semi wadcutters are more often used in the self defense capacity.

The unusual shape limits the use of wadcutter within 25 to 30 yards with respect to accuracy.. While it’s not an issue for practice, the limited range accuracy of full wadcutters might be problematic.

Full wadcutters are used almost exclusively in revolvers. The most common caliber for use is the .38 special.

Wadcutter and semi-wadcutter ammo are suitable for revolvers. If you possess a revolver chambered in .38 special, you will love this ammunition.

While wadcutters have several shortcomings, they are ideal for training new shooters and competitive shooting.

Wadcutter Bullets For Hunting And Self-Defense

Apart from competitive shooting, the bullet is less effective due to its low velocity and shape. If you are looking for ideal ammunition for self-defense, you will want to abstain from using a wadcutter bullet.

While the bullet can seriously injury or kill an assailant, there plenty of suitable alternative choices. You should therefore use a wadcutter bullet as a last resort. The numerous flaws make the bullet unsuitable for hunting big game, not least of which is the low accuracy range and low velocity.

The semi wadcutter is perhaps the better choice for self defense or home defense.

You can, however, enhance the wildcatter bucket performance for self-defense by using hand loaders. This involves loading hard cash bullets to pressure higher than factory loads. 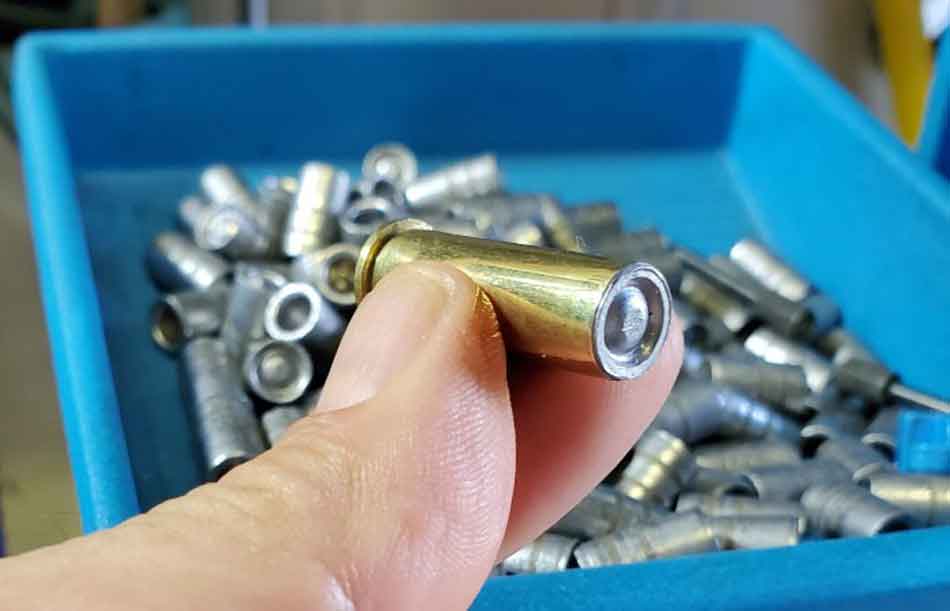 Wadcutters are unjacketed bullets characterized by a flat top.

These low-cost ammunitions are designed with low velocity to reduce recoil and are associated with training rounds and competitive shooting where accurate bullet recording is paramount.

Wadcutter is explicitly designed for shooting paper targets during competition and training. The bullet makes clean holes on the paper target hence reducing error and makes it easier to score. They reduce errors significantly.

Although wadcutter bullets are not suitable for self-defense, they are commonly used in .38 caliber revolvers and specially made semi-automatic pistols.

They are used for short-range shooting less than 25 yards. Beyond 50 yards, the bullets are inaccurate. If you plan to hunt or shoot targets beyond 100 yards, you may want to use a semi-wadcutter.