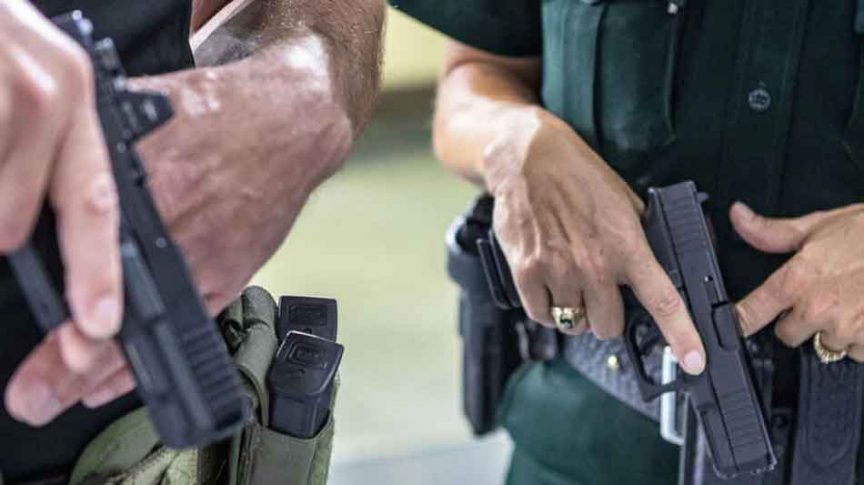 Many people are curious about which Glocks, and other pistols, that the police in America use. America has some of the best-armed police in the world so which pistols they choose to use is a good indicator of quality. This article will not only cover the exact models of Glocks that police in America use, but why.

So, what Glocks do the police use? They tend to use the Glock 22 above all else. They may also use the Glock 17 and Glock 19, but the Glock 22 is by far the most popular. There are conservative estimates that over 70% of the cops in America will use a Glock 22. This means that there are over 400k full-time police officers in the United States using a Glock 22 as their primary weapon. This is a testament to just how reliable the Glock 22 is.

What Pistols Do The Police Use In America?

Most police officers in America are armed with pistols. A pistol is more convenient, easier to use at short range and the most cost-effective form of firearm. Arming all officers with anything else doesn’t seem feasible. While it is true that over 70% of police choose to use a Glock 22, there are %30 that choose to use a different firearm. Here are the most popular other choices of pistols for cops:

This pistol is an upgrade of its predecessor, the p220, in almost every way. It has a longer barrel and holds 5 more rounds (15 used to be 8) making it much more reliable. 8 round magazines are inconvenient at the best of times, the newer p226 has resolved that problem completely. It is now possible to shoot more accurately thanks to the longer barrel and the need to reload is far less frequent. The main reason this model is so popular is its ability to be used by both hands. There is an ambidextrous catch making it more universally easy to use for all officers. It isn’t just better for left-handed officers to use, it also means that should anyone else need to use the pistol they will have an easier time adjusting to someone else’s firearm.

These classic revolvers are not exactly commonly used across the country, but they can still be found. Some precincts have grandfathered them into service. They are not as reliable as the newer Smith and Wesson semi-auto pistols, but they still get the job done. An officer who is a good shot is just as useful with this classic revolver as they would be with the newer model. This sidearm may not be as popular as some of the other guns in this list, but it does deserve a special mention.

Smith and Wesson are just as good at making semi-auto pistols as they are revolvers. The M&P9 is one of the most useful firearms deployed by the police. The main reason is its Picatinny rail under its muzzle. This makes it perfect for adapting the gun for whatever the situation calls for. Whether that is attaching a flashlight, laser sight, or finger stop. The ability to adapt the gun to the user’s preferences has made it one of the most popular choices amongst all law enforcement officers, not just the police.

The Beretta Model 92 is one of the more bulky pistols in circulation. Many officers chose other pistols, such as the Glock, because the Beretta is simply too big and heavy for their liking. Some officers argue that it is just simply not convenient for use. However, it does have a lot of stopping power. This is a powerful pistol, one that is also very reliable. Beretta has been manufacturing pistols for hundreds of years. They know what they are doing. Besides, there is the option for the Beretta Model 92SB which is smaller with a shorter barrel, if that would be preferable.

The H&K 45 is another incredibly versatile gun. It too has a Picatinny rail under the muzzle and is capable of being fitted with a silencer. The H&K 45 was originally intended for military purposes only. This means the H&K 45 is top of the line when it comes to accuracy. The anti-recoil technology has made this sidearm one of the most reliably accurate pistols in operation. This pistol was designed with military covert operations in mind, hence the ability to fit a silencer, this use has translated well over to the police. Whilst the Glock is by far the most popular pistol used by the police, the H&K 45 is right up there with it when it comes to covert/undercover work.

The Ruger is small, to say the least. This pistol is almost entirely used by off duty officers. It doesn’t have the power or accuracy of pistols like the Beretta, what it does have is the comfort and convenience factor. Many of the off duty officers are armed just in case they are needed in an emergency. Carrying around a Beretta all the time is not comfortable, convenient, or subtle. The Ruger LC9 is all of those things.

The Colt M1911 was designed and manufactured in, surprise, 1911. It was the weapon of choice for many of the American military personnel during both world wars. It even became a popular sidearm for other allied countries like the UK, having an M1911 when it was not your standard issued firearm was seen as something to be proud of. It is still a popular weapon of choice in the modern police force. The reason, if it ain’t broke don’t fix it. The M1911 is no longer the standard in the American armed forces but continues to be used by the police. It is reliable, easy to maintain, and just generally a safe bet. There are newer more advanced pistols, like the Beretta, that are in use but many prefer to stick with this classic.

The Glocks That Police Use

There are three models of Glock that the police use. The Glock 22, the Glock 19, and the Glock 17. The Glock 22 is used far more than the other two combined, simply because it is the newest and most advanced of the group. The Australian company that manufactures Glock has worked hard to design a pistol that is perfect for law enforcement uses. They succeeded.

Not only do American cops use Glocks, but so do the Australian police force. Both countries have some of the most well equipped, well trained, and heavily armed police forces in the world. They may be slightly different in many ways, but their appreciation for what makes a great firearm is the same.

The Glock 17 was the first model to enter circulation. It was heavily criticized for being “a plastic toy gun” because of its polymer frame. Despite these criticisms, it went on to become one of the most popular guns in the world. It was cheap to produce, making it cheap to buy, and easy to maintain. Its accuracy was somewhat decent and that was enough to sell it to many police forces around the world, not just the American ones. 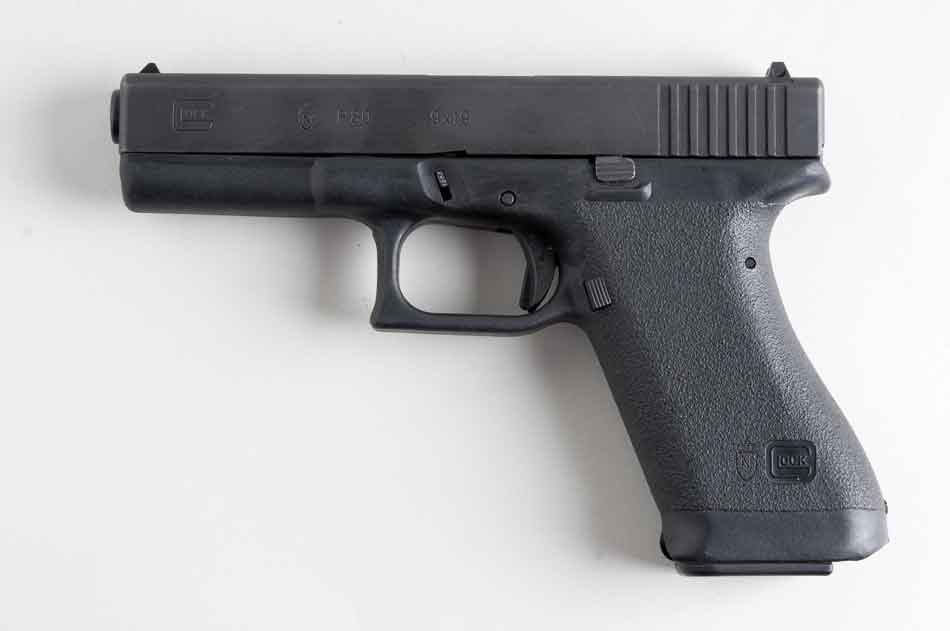 Next came the Glock 19. This model was sturdier, even more accurate, and even easier to maintain albeit slightly more expensive to buy. This model quickly became the most popular model in the American police force. There is a saying, “if you can’t hit it with a Glock 19 you can’t hit it with anything”. It is such an easy to use firearm that it is was perfect for the police force. Not because they can’t shoot, but because they are often in situations that are life and death. Providing them with the most reliable and easy to use firearm saves lives. That, and it was still far more cost-effective than other weapons on the market. 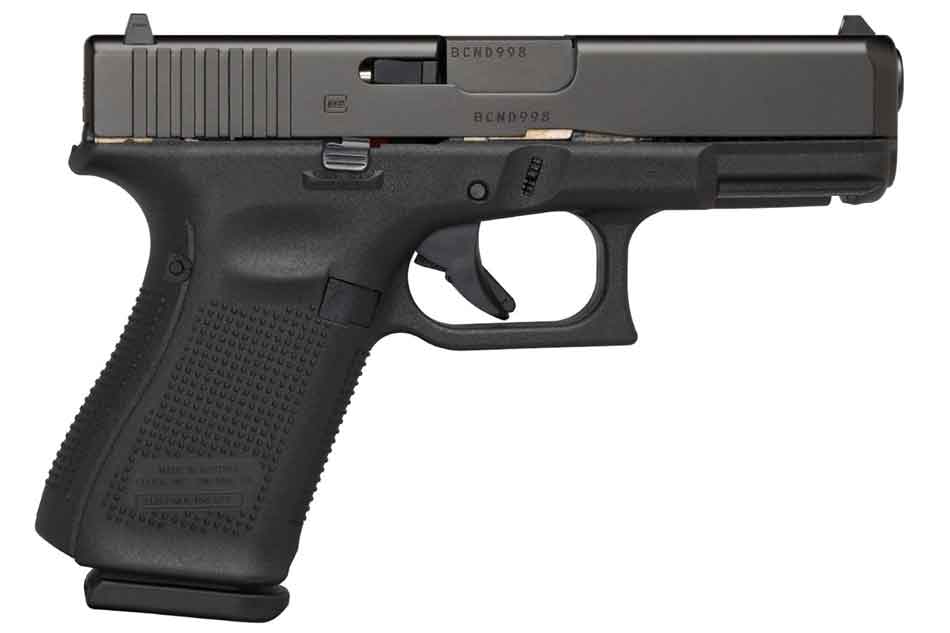 The Glock 22 is the most used weapon in the entire police force by a gargantuan margin. The Glock 22 is so reliable and easy to use that many officers can’t see any reason to choose anything else. The Glock 22 is also fitted with more safety features than its predecessor. When it comes down to it, a Glock 22 is the pistol that most officers want during a shootout. It’s powerful, it’s reliable, and it’s extremely accurate. What more could you need? 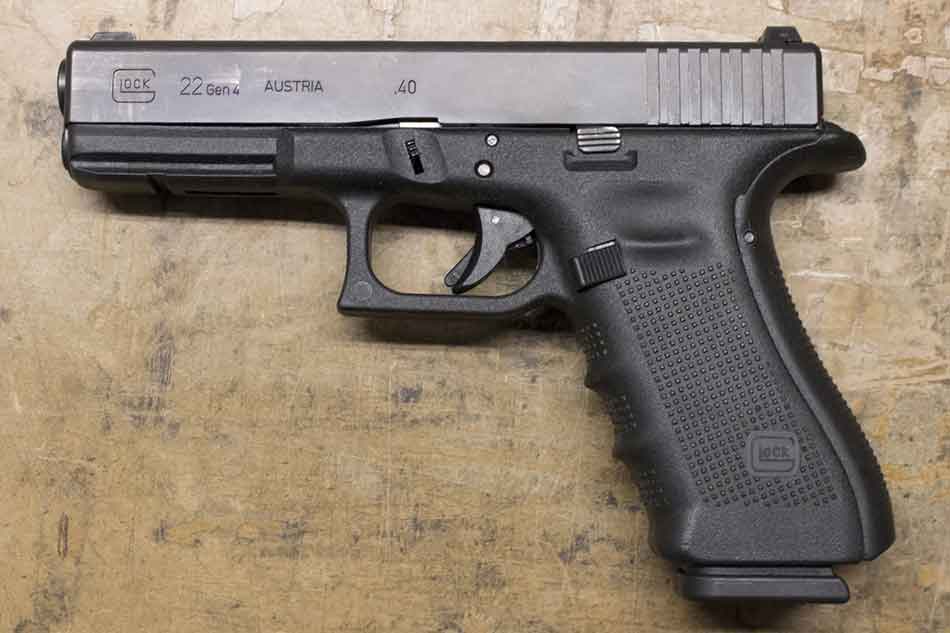 Why Are Glocks Popular With Law Enforcement?

Reliability over all else. I know it has been mentioned multiple times above, but that really is the main reason. The Glock can withstand even the most extreme conditions and still operate as normal. There have been several independent tests of Glocks to back up these claims. Most guns need constant maintenance or they will break/jam. The Glock seemingly doesn’t. The Glock has been thrown off buildings, frozen solid, buried in the sand, driven over by a truck, fired 100,000 times without any maintenance and it just keeps working. Having a gun that will still work despite being subjected to conditions that would destroy many alternative weapons is always going to be the most ideal choice.

It also just so happens that Glocks are so much cheaper than the alternatives. The closest comparison to a Glock is probably the H&K 45. The Glock can be around half the price of the 45. As mentioned above, there are around 400k police officers using a Glock as their primary service weapon in America. That means the government needs to buy at least 400k Glocks. If they had to buy 400k 45’s instead of Glocks they would be spending twice as much on firearms. It simply isn’t feasible. Why would the police use something other than the Glock when it ticks all of the boxes?

So, while the cops do use many different firearms, not just pistols, the Glock is the most popular by far. It does everything well, there may be guns that do some things slightly better but the Glock is the most cost-effective and easy to use pistol on the market. And it isn’t even close. This isn’t likely to change any time soon either. There would have to be a revolutionary change in the world of firearms for something to topple to Glock.