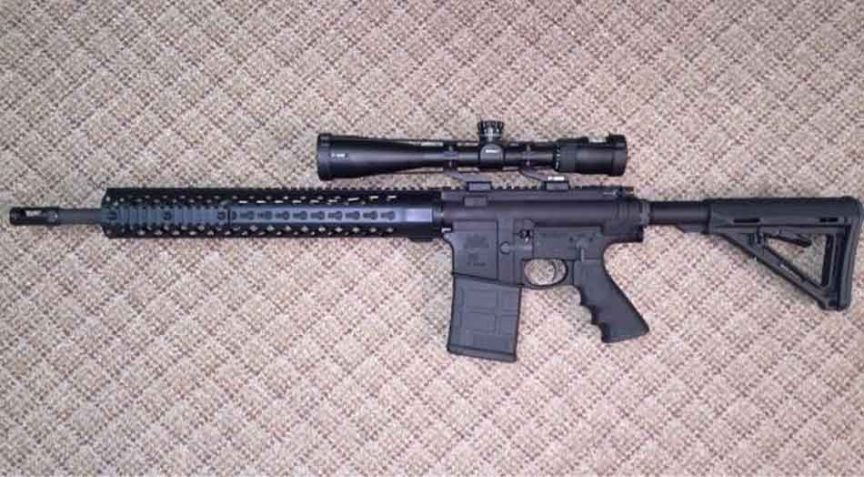 If you’re into hunting or sports shooting, you may be looking for a powerful and ergonomic rifle. A simple search from Google often brings up the AR-10.

If you’re considering this rifle, you may be asking yourself, “will it be suitable for my activities?” and “what caliber is an AR-10?”.

The AR-10 is available in many calibers including the 4 most commonly seen, the 5.56 NATO, 223 Remington, .300 Blackout, and 7.62x39mm. The AR-10 combines both simplicity and power, a combination most rifles lack. It’s made of fiberglass and other durable materials, which also ensure that it’s light. Having an effective range of at least 300 yards, you can use it for boar and deer hunting.

For a very detailed list of all the calibers and cartridges that are available for an AR-10 rifle, please click here.

What’s more? It’s a semi-automatic rifle improving your accuracy when shooting at a target. 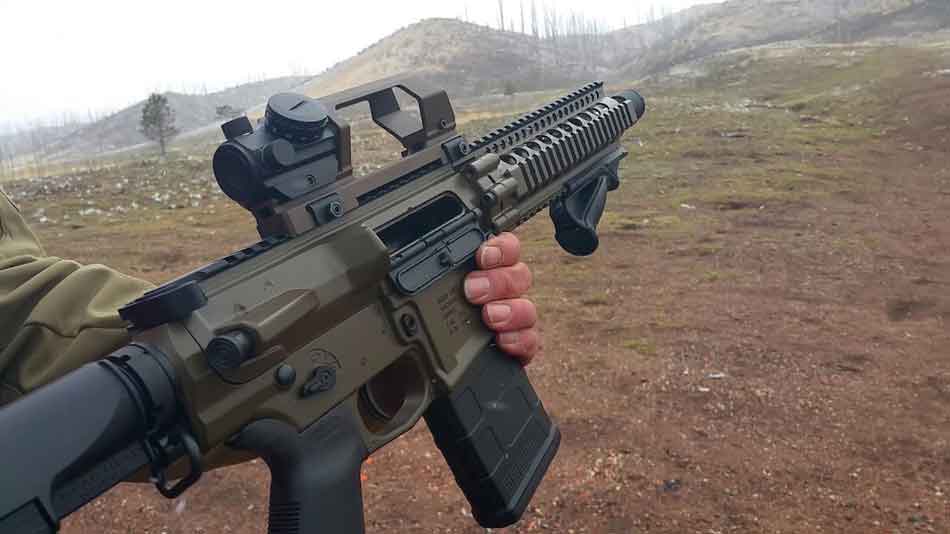 Do you want to learn more about this rifle? Please keep reading to find out how it came about, the designers, and the features that make it stand out.

The AR-10 is a gas-operated semi-automatic battle rifle designed to fire a variety of ammunition including 5.56 NATO, .223 Remington and 7.62*39.

It was first designed by Eugene Stoner in the 1950s and was manufactured by ArmaLite, a subsidiary of the Fairchild Aircraft Cooperation. This rifle was also ergonomically designed to be lighter and more efficient than the battle rifles used at that time.

That’s why it features a stock design, and the alloys and phenoline composite build.

The AR-10 was used extensively in Portugal, Sudan, Guatemala, and several wars that occurred in the 1950s.

However, ArmaLite experienced several mishaps during the production of this rifle; that’s why they didn’t mass produce them. They often rushed through production, which led to design flaws.

For instance, it was to replace the M1 Garand in the US Army. However, the barrel burst during testing, and the US Army had to opt for the T44 instead.

ArmaLite replaced the barrel and continued improving the AR-10 until they introduced the AR-15. This was in response to the US Army’s requirement for a 22-caliber, six pounds, and an accurate rifle for at least 500 yards. 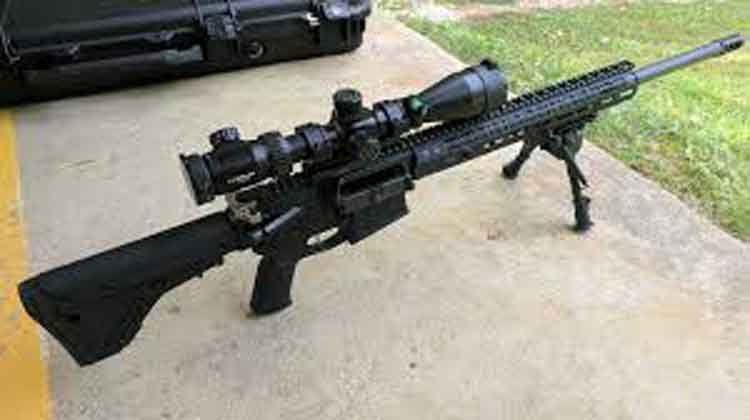 The AR-15 was exceptional, but it didn’t make the cut, and the Army Chief chose the M14 instead. Due to financial reasons, ArmaLite sold both the AR-15 and AR-10 designs to Colt’s Manufacturing Company in 1959.

Colt’s Manufacturing Company went on to mass-produce the AR-15s, and they first made their debut in the US Air force in the 1960s before replacing the M14. The AR-15 also inspired the current M16 rifle.

Some of its major competitors include the HK G3, FN FAL, and M14. As mentioned earlier, even though it may weigh as much as 10 pounds, it’s still lighter than most of its competitors. Other notable features include the rotary bolt locking mechanism and the pistol bolt carrier.

Due to its accuracy, the US Military confirmed that most of its members achieved expert marksmanship with this rifle.

This is why they issue it as a sniping and marksman’s rifle.

The hunting enthusiasts also prefer it for its ability to bring down big game and the availability of accessories.

But due to the large caliber and the loud noise, it may not be the best rifle for home defense. It also tends to receive less after-purchase support when compared to the more common AR-15. 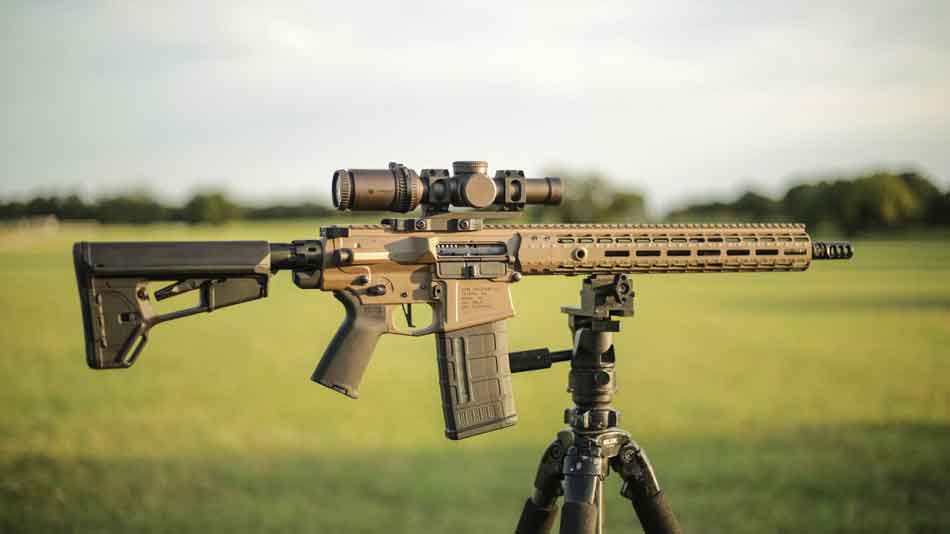 For starters, the AR-15 is lighter and cheaper.

The AR-10 is superior to the AR-15 when it comes to the shooting range.

What Calibers Is The AR-10 Available In?

For a very detailed list of all the calibers and cartridges that are available for an AR-10 rifle, please click here.

The 7.62/5.51 chamber is a little longer to accommodate different cartridges from around the world.

The thickness of the 7.62’s wall allows it to expand within this chamber. However, since the .308 has a thinner wall, the case could rupture.

Unless the manufacturer clearly states that the 7.62 rifles can shoot the .308, stick with the 7.62 for your safety. Other calibers that the AR-10 is available in include; 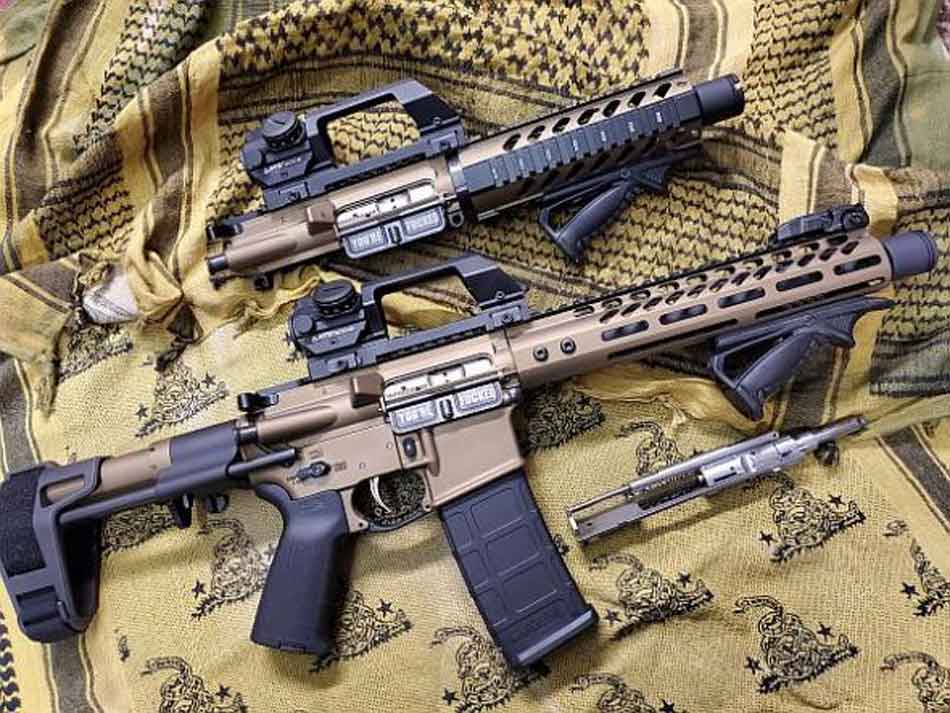 Is The AR-10 An Assault Rifle?

According to Wikipedia, an assault rifle needs to have the selective-fire function, detachable magazine, intermediate cartridge, and an effective range of at least 330 yards (990 feet).

The AR-10 has an intermediate cartridge, a detachable box magazine, and a selective fire feature. This feature allows the rifle to either fire in burst mode, semi-automatic, or fully automatic.

The AR-10 is semi-automatic, where the cartridge “self-loads,” but the user has to press the trigger every time they want to shoot.

So yes, it can be classified as an assault rifle from military sense.

However, the AR-10 for the civilian market is semi-automatic with no selective fire capability, so no, a civilian AR-10 is not an assault rifle.

The AR-15 came at an era when NATO needed a rifle that was lighter and can carry more rounds. The 5.56 cartridge in AR-15s are smaller and easier to shoot, with no select fire function so the AR-15 is not classified as an assault rifle.

It’s not clear how Eugene Stoner coined the name AR10, but the AR does stand for “ArmaLite Rifle,” not ‘automatic rifle’ or ‘assault rifle’, as some people claim.

As mentioned earlier, ArmaLite was a sub-division of the Fairfield Engine and Airplane Cooperation. Their aim wasn’t to mass-produce firearms. Led by George Sullivan, they started by creating designs to sell to other companies.

They first designed the AR-5 prototype, which became an Aircrew survival rifle for the US Air force – the MA-1. At this time, Eugene Stoner had just left the US Marine Corps, where he was an ordinance officer.

He was trying out his gun designs, and that’s when they met with Sullivan at a gun range, and he joined ArmaLite as a Chief Designer.

Stoner went ahead to design the M-8, also referred to as the X-01.

This was a more classic rifle since it had some wooden parts, an in-line profile, and steel build. However, it inspired the later Stoner’s guns, which often featured plastic and aluminum parts. The X-01 also inspired the X-02, which became the first AR-10.

It featured forged aluminum, polymer, and fiberglass, which are lighter than steel and more durable than wood. The X-03 came later and featured a distinctive handle that is now in the AR-15s, M16s, and more recent AR-10 models. 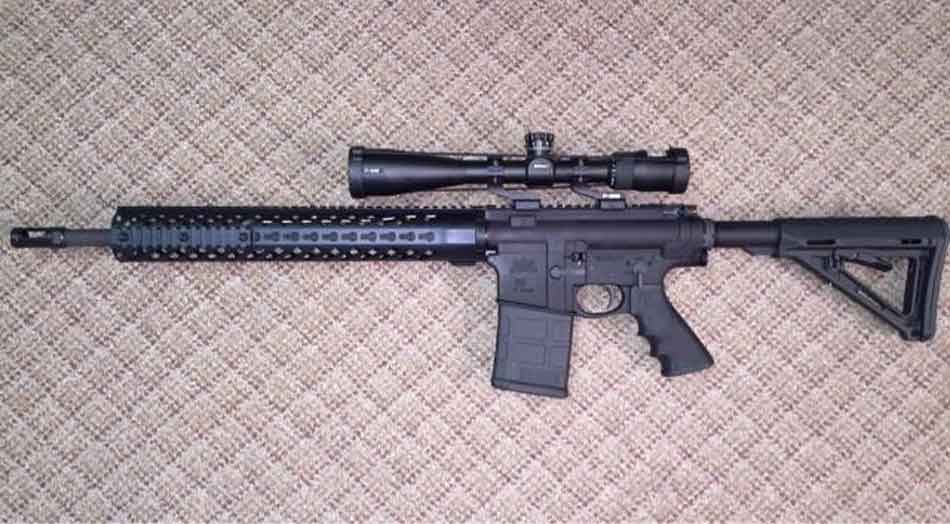 What Is The Effective Range Of An AR-10?

Three factors influence the effective range of a rifle; the rifle, cartridge/ammunition (type and grain), and the environment (wind). We have already registered that the AR-10 is a powerful weapon, but let’s talk about the 7.62*51 NATO/.308.

Additionally, barrel length and the ammunition used are factors.

This cartridge was first designed in the 1950s and is one of the most popular in military service and civilians.

Most manufacturers claim an effective range of 660 yards. But according to this report on actual field tests, the effectiveness of the cartridge is excellent up to around 300 yards then starts dropping slightly towards 500 yards.

Despite experiencing some failures and rejections when it was first launched, the AR-10 revolutionized the rifle industry.

It grew to become a useful rifle both in the military and civilian gun ownership thanks to the lightweight, power, and long effective range. It also inspired the AR-15 and M16, both of which are still widely used today.