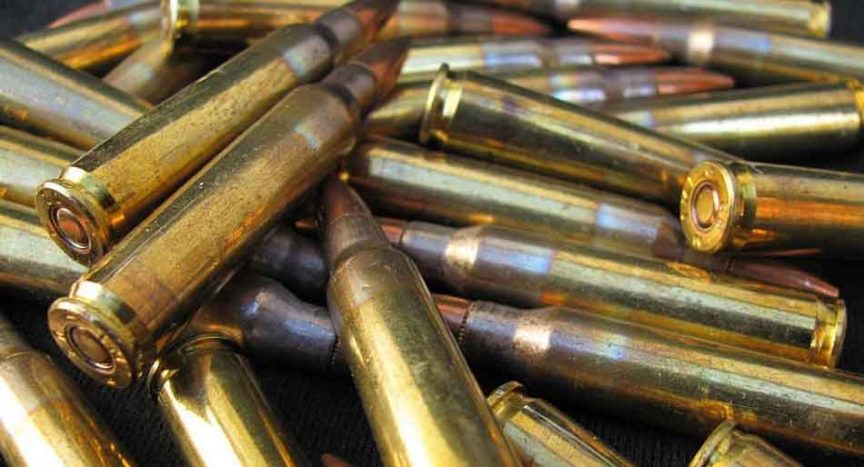 Range as a concept means different things to different people within the shooting community. It also depends upon your reasons for owning a firearm.

For hunters and competitive shooters, as well as the military, range has a different value to those with air guns.

If you want distance for your shooting, a well known favorite is the tried and tested .30-06 cartridge. A natural competitor to the .308 Winchester, many people wonder what the ballistics of the .30-06 actually are?

Modified from a .30.03 cartridge, the .30-06 was developed for military purposes in 1906. originating from a desire to be shooting at 1000 yards. Over a century later from inception it is now available commercially for the purposes of hunting, and recreational shooting. 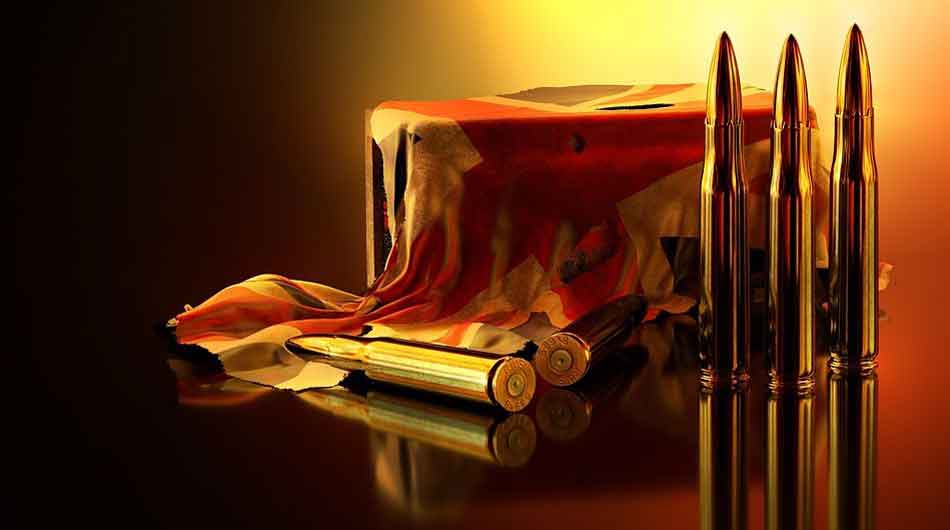 Although there are larger calibers, with more powerful rounds on the market, the .30-06 has endured and has a proven track record. It’s a good combination of necessity, affordability, popularity, effectiveness, and useability.

While everyone has a different need, certain circumstances need some conformity of traits in their ammunition. Along with the .308 Winchester, the .30-06 cartridge will be a caliber to choose if you need an effective distance round.

The military has .30 cartridge diameter rounds marked as being effective between 800 to 1000 yards, so for anything under and up to that, the .30-06 round should suit most people.

It’s a cartridge born out of military necessity to engage the enemy at distance. Even in modern warfare, the caliber is used for effective fire up to 1000 yards.

It was used extensively in both world wars, the Korean conflict, and engagements in the Vietnam war.

Today, in the 21st Century the cartridge has developed for the civilian market, and is a proven round for effective firing up to 800 to 1000 yards. It has such a track record that if you want a round capable of firing at a distance, then other calibers have to be judged against it.

Having such history the .30-06 Springfield with such gravitas it’s not surprising that it’s a popular.choice amongst hunters, competitive shooters and those involved in target shooting for recreational purposes.

Modern manufacturing processes and a Century of gained knowledge have produced a variety of ammunition choices, in terms of power and bullet design for almost every conceivable use. It’s a round that can be found anywhere and an effective lethal round for hunters.

As a hunting round it may be unsurpassed. At 1000 yards, probably a greater distance than can be effectively aimed, a round is traveling at 1200 fps. More than enough to be lethal, and it’s a speed that is greater than some 9mm handguns actually fire as muzzle velocity.

That’s quite a round.

So, with a history dating back more than a  few decades, what exactly does a trajectory chart look like for a .30-06 bullet. 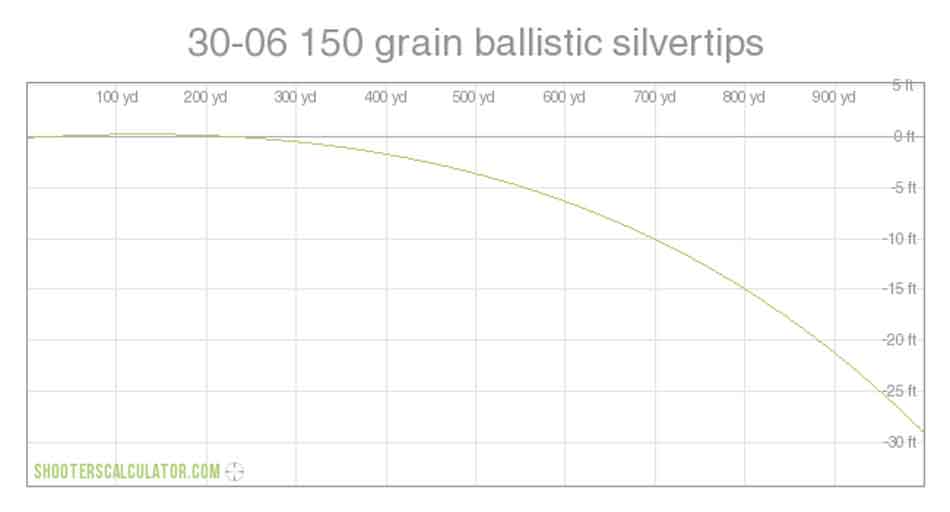 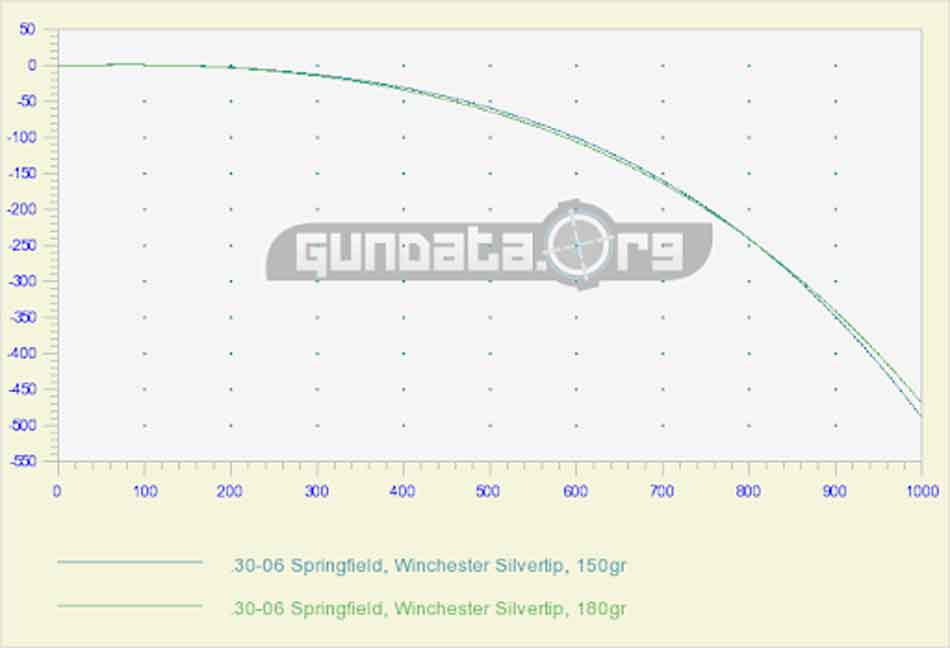 Between 250 to 275 yards, it will start to drop a little more precipitously.

At 300 yards there is still perhaps only 6 inches of bullet drop, and out to a further 500 yards distance, it will drop to 40 inches below the aiming point.

So out to 500 yards, the .30-06 is accurate for most shooters who can counter for just under four feet of drop.

Much like most .308 rounds after 500 yards the challenge comes in and the bullet will start to drop at a greater rate over distance due to the fact that it is slowing.

As definitions go, the term ‘effective range’ has different meanings to different people.

If the weather is superb and you can count for 350 inches of bullet drop, then it’s pretty effective up to 1000 yards.

The less professional the equipment, the more inexperienced the shooter, and the gustier the weather then it could be tricky at that range. Shot placement might look a little patchy.

That said, it might be a good question to be answered by a professional shooter. What do they call the effective range of the 7.62mm caliber rounds?

So we can turn to the US armed forces for the answer to this one.

For these rounds, the US army mentions that the effective range is around 875 yards where the bullet drop will be around 20 feet.

The US Marine Corps though has a maximum effective range at 1000 yards, so they are both in the same ball park. 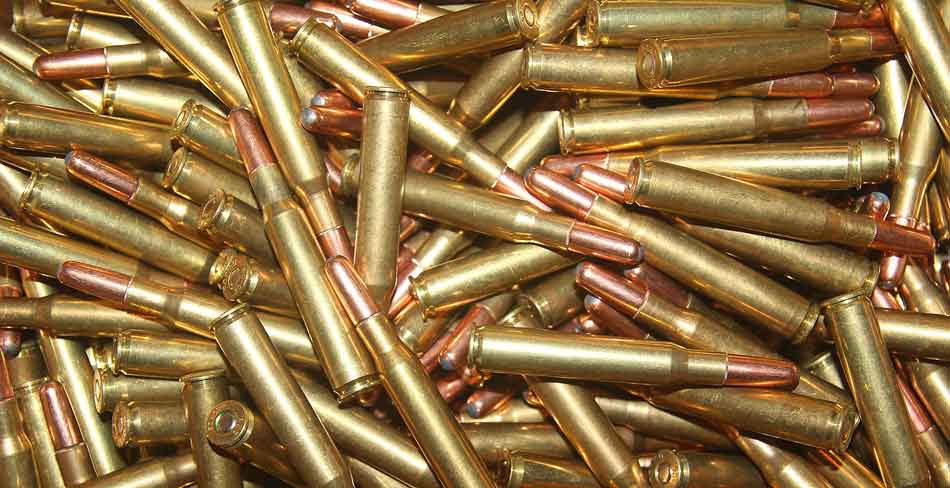 Your definition of effective may be different, but US forces are trying to place a shot in a human target at 1000 yards.

This is the distance by which they mean a soldier can effectively fire at the enemy, however, the round is still lethal way beyond where you can accurately aim it.

If you are trying to become a good marksman, then this 900 to 1000 yard range might be a good benchmark to aspire to in terms of affective range,

Looking around the internet, I came across some confusing tables but managed to extract the data that might be useful.

The data should be treated as approximate, and shouldn’t be exchanged for practical and experimented data in the field. The reality of what you see on the ground should always take precedent.

By any stretch of the imagination, the .30-06 Springfield is a caliber that can easily be used out to 1000 yards, by a competent marksman.

The US army has it to 875 yards, and the US Marine Corps to 1000 yards, so if it’s been tested that thoroughly, it should be good enough for the rest of us.

So, what have we learned?

Depending upon your target, and propensity for extreme accuracy, after 300 yards you will have to compensate for over 6 inches of bullet drop.

Even at 1000 yards, a .30-06 round is still moving extremely quickly, quickly enough to be very lethal. The round is still traveling at 1200 fps even if you miss the target.

So, whatever any critics the round caliber may have it is an extremely effective round from 300 to 1000 yards.