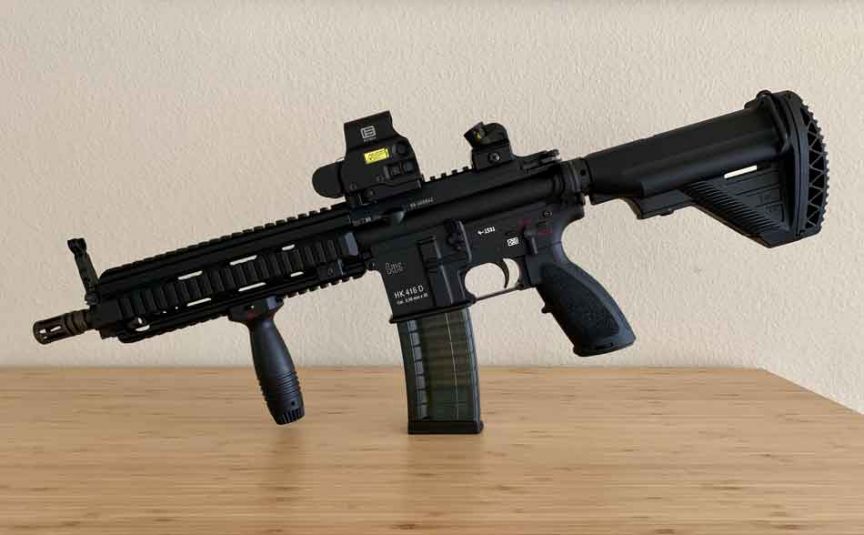 When looking for an assault rifle, the go-to options are usually the AR15 style weapons. The various models are great but are not always the best for people.

If you’re looking for high quality, then the HK416 is a good option. Or at least it would be if it wasn’t a military grade weapon unavailable to the public.

Many who like the shooting sports or who want a home defense weapon then quite reasonably ask, is there a civilian version of the HK416?

There is a civilian version of the HK416 and has been available since 2004. Hecker and Koch took their military design and manufactured the MR556 for civilian use. It looks similar, fires the same caliber, weighs the same, has the same barrel length and effective range. However, it is quite costly, but it is a good replica for the HK416.

The MR556 is a variant of the HK416 and was released in the American civilian market in 2004, but the newest model, the MR556A1 has undergone several upgrades, but many of the functionalities are similar to that of the HK416. 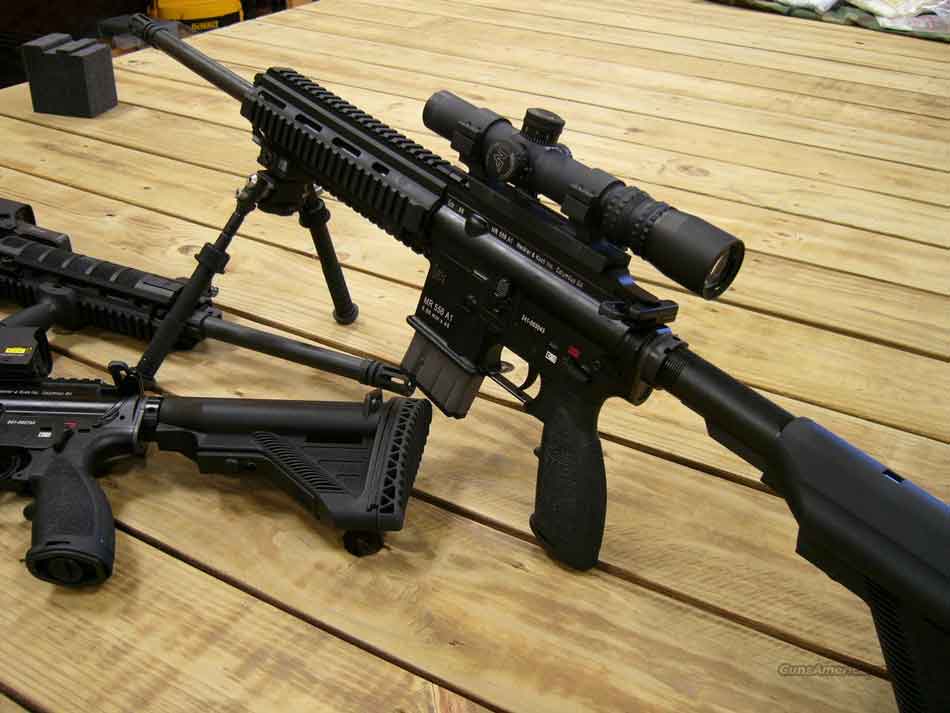 In this guide, we discuss these two models, their similarities, differences, and why you should consider getting the MR556.

Besides some modifications to “sporterize” the MR556, they are similar in many other ways.

The barrel was adjusted, and the takedown pins were designed in a way that you have to use the tool placed at the stock to open and close them.

Below is a comparison of these two rifles’ specs.

Often famed as the gun that was used by the Navy Seals to kill Osama Bin Laden, the HK416 is an assault rifle based on the AR15s.

It is designed and manufactured by Heckler & Koch, a German firearms company, also known for manufacturing the G36 rifle series, XM8, and SA80. 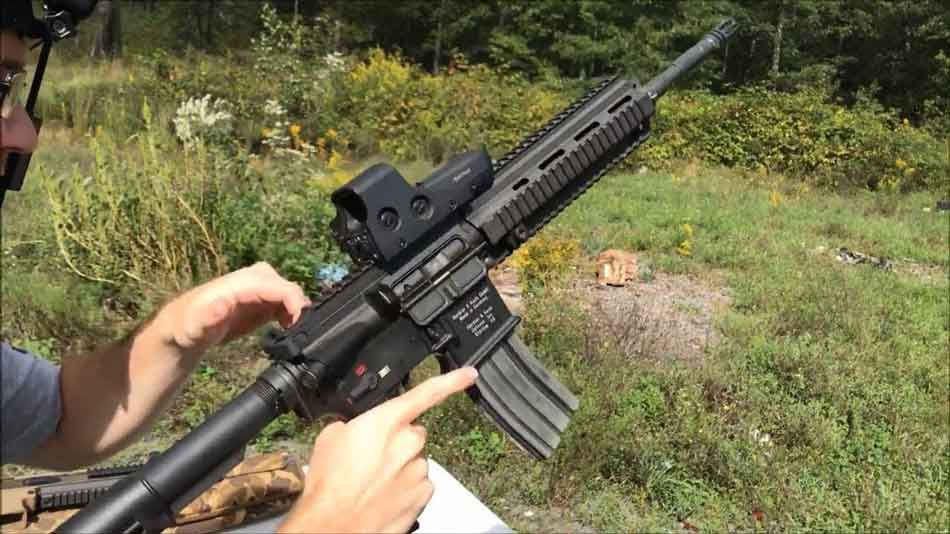 The HK416 was a request by the US Delta Force in the 1990s. They replaced their M4s with this rifle in 2014. Some distinctive features include the picitinny rail receiver that allows it to use accessories from the M16 and M4.

And the telescoping buttstock.

Even though it’s based on the ARs, it features a short-stroke gas piston system that ensures that the gun’s fouling doesn’t end up in the barrel.

This system makes the rifle easier to clean and easier to manage. 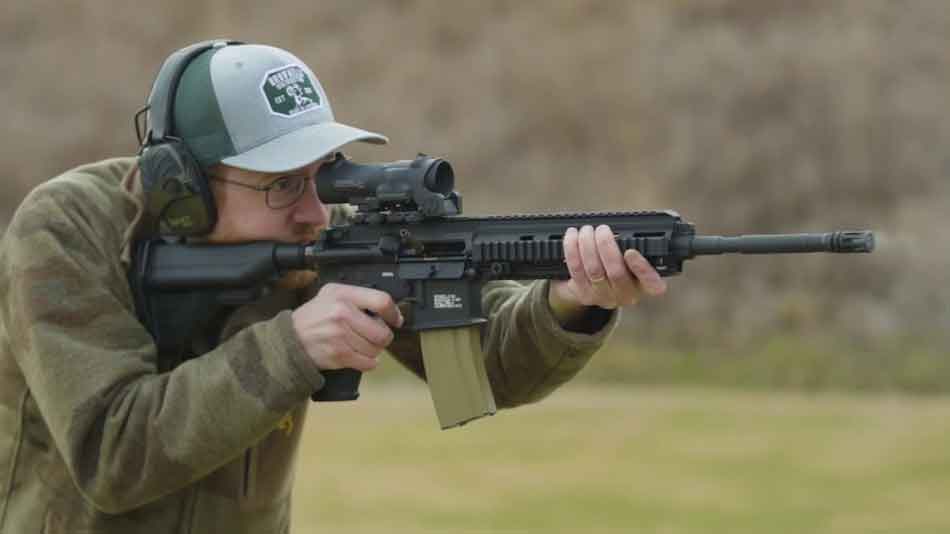 An updated version of this rifle, the M27 IAR (Infantry Automatic Rifle), is being issued as an infantry rifle in the US Marine Corps.

The German Special Forces use the HK416A7 variant. Other armed forces that use this rifle include the Norwegian Forces British Armed Forces and the French Armed Forces.

The MR556 – The Civilian Version

The MR556 is the variant of the HK416 that was released for the civilian market. Essentially by the company that makes the HK416.

Together with the MR762, these two civilian versions were introduced into the American market in 2009.

This rifle uses the short-stroke gas piston system. When you remove the free-floating barrel, you’ll see the piston mechanism that resembles HK416 and that’s in the G36 firearms.

There’s a bolt carrier in the upper receiver that resembles the one on the M16 and M4. It’s a one-piece bolt carrier built to last longer even when used regularly. 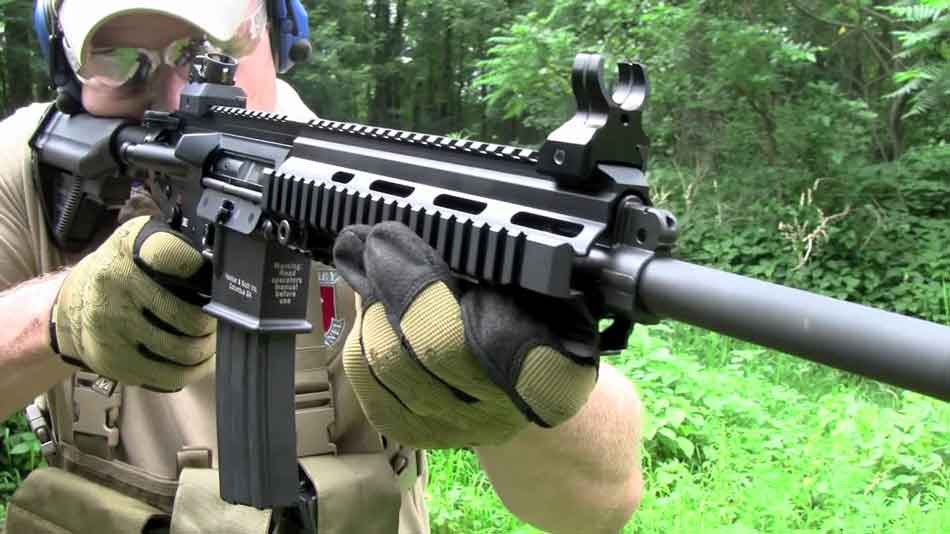 HK increased the barrel profile and didn’t chrome line this rifle to improve its accuracy.

At the buttstock, there’s a tool that you can use to “unlock” the pin that holds the upper and lower receivers together.

This locking mechanism increases the stability of the rifle, making it more accurate. This gun can also go on safe with the hammer ford, a unique feature that differentiates it from the M16.

When not loaded, this rifle weighs around 9 pounds and has a 16.4 trigger pull. The telescoping stock extends the gun to 37.68 inches, but the gun is 33.90 inches long when retracted.

This rifle’s upper receiver is easily compatible with the M16, M4, and other AR15 rifles. But this detachable system was not present in the earlier versions of the civilian’s rifle. For instance, the European MR223 doesn’t have this feature.

The MR556A1 also works with the STAGNAGE magazines without any modifications.

The MR556 has the same steel build as the HK416. It also uses the same short-stroke gas system that has proven to be better than the direct impingement in other AR series rifles.

One of the main differences is the larger barrel profile in this rifle. According to most users, this feature enhances its accuracy.

Another difference is the barrel is not chrome lined. Even though some users claim that this omission adds to its accuracy, they also claimed that it makes the rifle less durable.

The MR556 is designed to make it easier for a civilian to handle. That’s why it’s easy to remove the floating-barrel rail mechanism by just turning the screw.

The gas piston and rod are also easy to remove. The 1 in 7-inch twist and 6 lands and grooves are other distinct features meant to enhance its efficiency. The takedown pin at the buttstock is another feature that this rifle has that the HK416 lacks.

The MR556 is a semi-automatic rifle, which means that the bullet self-loads, but you still have to press the trigger to fire each round.

This is the main deal-breaker between these two rifles since the HK416 is a fully automatic rifle (selective fire) that can fire up to 900 rounds per minute. 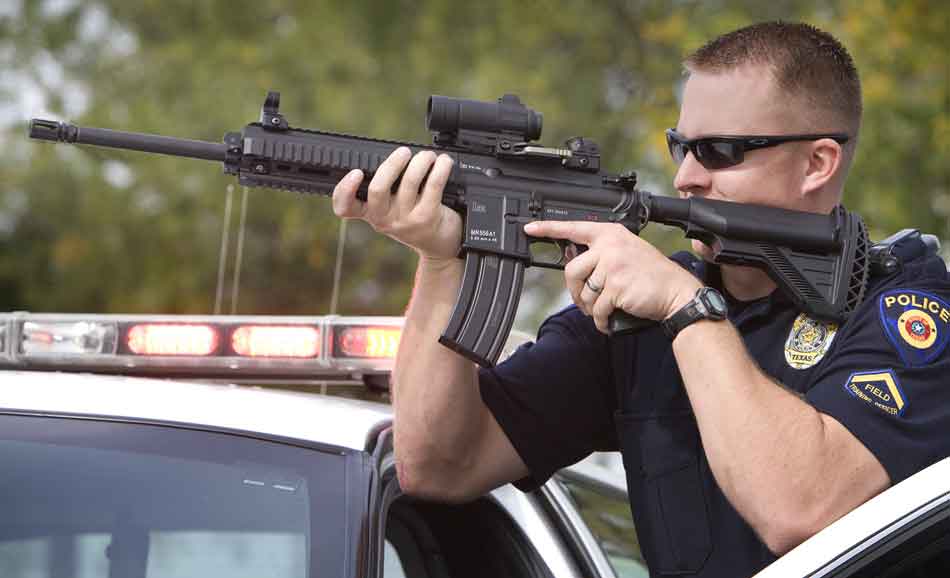 But for hunting and self-defense, having an automatic rifle would be an overkill. Not to mention the illegality of it.

Besides the few adjustments to make the MR556 friendlier for a civilian, it is very similar to the HK416.

It is quite expensive, costing over twice a standard AR15, but you can’t argue with the results.

The AR15 uses the direct impingement system, which deposits fouling into the barrel, making it necessary to clean it often.

If you want a civilian variant of the Navy Seals preferred weapon, it’s a good choice.

Since it weighs around 9 pounds when empty, expect to feel some weight when carrying this gun.

You also feel some recoil, especially when shooting stronger rounds, so make sure you have mastered the correct posture of using such rifles.

The rifle arrives in the HK swag but doesn’t include the sights. So make sure you purchase before going target practice. A good EoTech can be many hundreds of dollars.

The fact about the bolt carrier remaining cool is actually true.

After firing several rounds, you can access the bolt carrier, and it will still be cold, unlike in the direct impingement where the bolt carrier will be a little hot. This feature increases the longevity of the rifle.

It features a two-stage trigger on it which may take some getting used to, but it works great. Besides no heat buildup and minimal dirt build-up, this rifle doesn’t jam often, and is very comfortable to shoot, even for a new user. 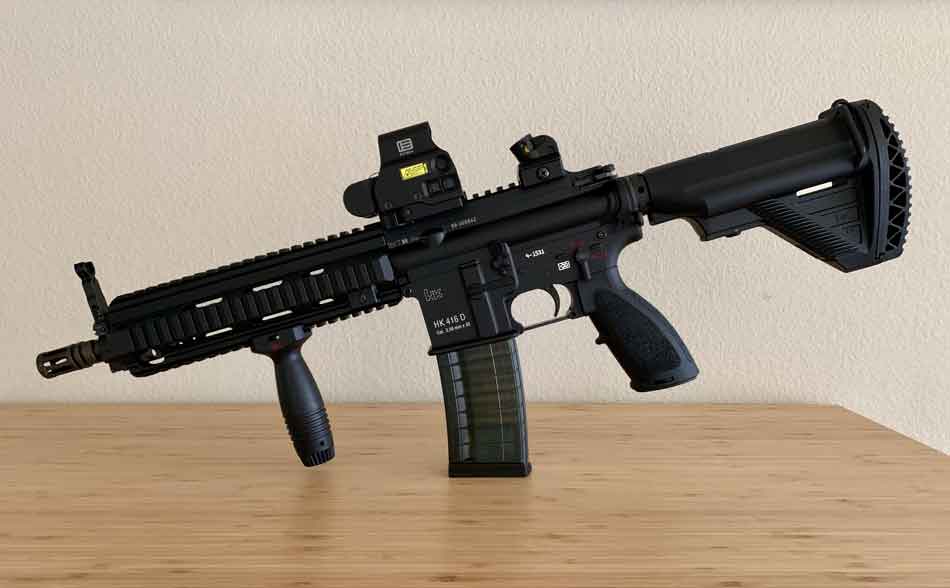 For starters, the MR556 is a bit “overpriced,” but you get what you pay for. Heckler & Koch take their rifles through a very rigorous testing process to meet the standards.

As a result, this rifle can fire more than 20,000 rounds in its lifetime. The short-stroke gas system is also always convenient.

However, it has its flaws. For instance, it’s quite heavy, weighing 8.6 pounds when empty. The AR-15 weighs 6.5lbs when loaded with a 20 rounds magazine.

If you’re used to carrying the AR15, then be prepared to carry a heavier load.

The MR556 has a short-stroke gas system, while most of the AR-style guns use the direct impingement.

The direct impingement “:dirtifies” the rifle and increase the wear and tear in the riffle. But in some cases, the short stoke system may experience a carrier tilt.

This tilt pushes the bolt carrier towards the buffer at an angle that constantly destroys the buffer. But this doesn’t happen often. The short-stroke system also adds to the weight of the rifle.

Despite the ban on importing certain military-style firearms into the United States, you can still fulfill your dream of owning one of these.

This is because H&K is producing the MR556 locally in the United States. H&K went as close they could to building an “HK416” clone when designing the MR556.

They use the same caliber, are almost the same size, and have a tremendous effective range. Because of its cost, weight, recoil, and other technical features, this weapon isn’t every gun owner’s cup of tea.

But once you get the hang of it, you may even ditch all other assault rifles that you own.