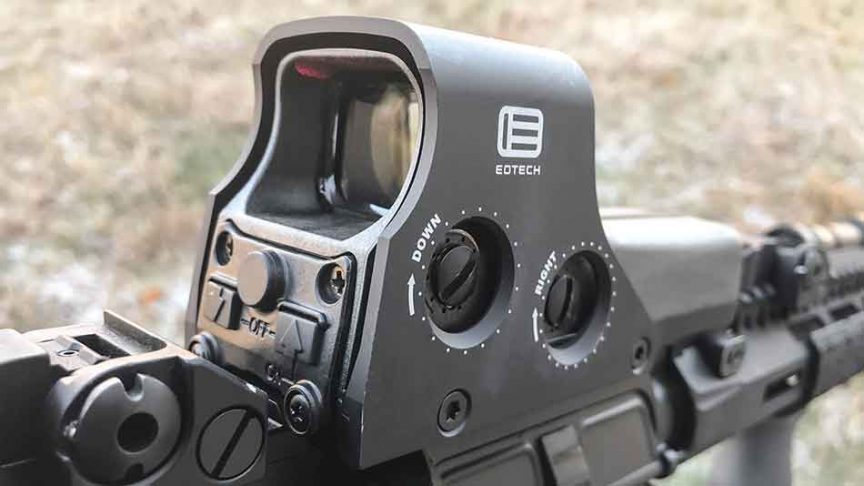 EOTech, a division of L-3 Communication (among the largest defense companies in the U.S.) delivers technology and products in the field of holographic sighting systems, tactical laser, and imaging equipment. Their holographic weapon sights for small arms have been adopted by various military and law enforcement agencies.

HOW DO HOLOGRAPHIC SIGHTS WORK?

Unlike reflex sights, a holographic sight doesn’t use a reflected reticle system. The reticle is recorded in three-dimensional space onto a holographic film that is part of the optical viewing window. The reticle uses collimated light so the sight has an aim point that can move with the eye position.

Holographic sights offer some advantages when compared to reflex sight:

They usually feature a semi-squared shape design that offers a much wider field of view. This gives the shooter enhanced peripheral vision that is almost completely unobstructed.

They feature a 68 MOA ring with a 1 MOA dot, which is the finest dot available in any optic. It provides the best compromise between speed and accuracy. (Larger dot can compromise the shooter’s field of view). Plus, with a holographic sight, the aiming dot doesn’t expand when viewed with magnification, offering much greater precision.

Like any other sight, holographic sights need to zeroed-in. Zeroing-in, or sighting in, is the process of aligning the sights on the weapon with the rifle so the shooter can accurately aim at their target from a set distance. When your sight is properly zeroed in you can be sure it will match the bullet’s point of impact out of the barrel. Once zeroed the device is capable of providing accurate sighting to at least 300 yards.

Let’s see in this article how to zero in your holographic sight.

1.SET UP YOUR POSITION

To zero in your holographic sight properly, you need to prepare a stable shooting platform. Whether you use a seated or prone shooting position, be sure that the rifle is stably supported.

Set up a paper target exactly 25 yards downrange of your shooting platform. Zeroing the EOTech at 25 yards will give an accurate aim point out to 300 yards.

Ensure your sight is set to mechanical zero. You can use the windage and elevation adjustment dials to do it: both of them contain 160 clicks in total. Rotate the adjusting dial (or screw) all the way in one direction, and then rotate it back the other direction counting 80 clicks. Repeat the same for the other adjusting dial or screw.

When your position and paper target are set up properly, load three rounds into your weapon and shoot them aiming at the center of your target. It doesn’t matter where. The rounds strike the target, but all three rounds should hit it as close together as possible.

Render the weapon safe and check your target to determine your average strike location.

For example, if the three rounds form a triangle, the average strike location would be the center of the triangle. Be aware that if the rounds are too far apart, you’ll not get an accurate reading; so, try to group the rounds within a radius of no more than about three inches.

3.i.Measure from the average strike location left or right to the imaginary center line to the target running from top to bottom, and record the measurement.
3.ii. Measure from the average strike location up or down to the imaginary line running from left to right, and record the measurement.

Fire an additional three rounds and check the target again.

If necessary, make any further adjustment until the point of impact is approximately ½ inches below the point of aim (which is the center of the target).

HOW TO LASER BORE YOUR EOTECH

Other than zero in your sight, you also need to bore sighting. Zeroing is a method of adjustment so that the point of aim is the point of impact. Bore sighting is a procedure that allows you to align the firearm barrel and sight. In order to be prepared to shoot any target, you’ll need to both zero in and bore sight your weapon.

By using a laser bore-sighting you can make the bore sighting procedure much faster. It uses a laser diode to project a dot on a target much like a laser pointer, making it easy to see when your crosshair aligns with the laser.

Before you laser bore-sight your EOTech you want to be sure your firearm is unloaded and verified safe. Then, insert your laser sighting device into the barrel and project a dot onto a wall at a distance of 7 yards. Turn your EOTech sight on and adjust the brightness settings so the center dot is dimmer than the laser bore projected dot. Finally, adjust the EOTech to the projected laser on the wall and align the bottom of the outer circle at the 6 o’clock hash mark position while looking through the EOTech.

Complete the zero with a live-fire at 50 yards using the center dot for point of aim.

WILL THE EOTECH HWS HOLD ZERO IN TEMPERATURE FLUCTUATIONS?

As some users – and EOTech official website itself – reported, EOTech holographic sights experience a point of impact shift away from the point of aim when the sight is exposed to a temperature different from the one at which it was zeroed. Such shifts are due to natural thermal expansion or contraction of the materials used to manufacture the sight when they are heated or cooled and it’s greater the more extreme the temperature change.

A second issue has been reported due to temperature drift: sights may not return to zero. The zero may shift of +/- 2 MOA upon return to ambient (73°F) after being exposed to any temperature between -40°F and 122°F.

Nevertheless, the average consumer, in normal use, will never experience any of the problems we’ve just described, and even when they do, the zero-shift would be so small that it’ll be barely noticed by most shooters at most ranges. The zero shift has really little effect on the utility of your rifle.

WILL MOUNTING AND UNMOUNTING THE EOTECH AFFECT ZERO?

After you unmounted and then remounted your EOTech sight on your rifle, you may notice the zero has slightly shifted. It’ll be still pretty close to the point of aim, but a minimum shift is inevitable.

To avoid this to happen, you want to make sure to use a mount that is designed to be removed and replaced without loss of zero, so you won’t have to sight in your sight every time you put it back on.

EOTech manufactures great sight devices that can withstand heavy use and recoil in a military engagement. Their products are the top-quality choice for most civilian users.

Their cutting-edge holographic technology can ensure beginner and advanced shooter great and accurate performances. Zero-in and bore-sighting procedures would be required to ensure accuracy, but neither of them is complicated or different from those any other sight from different brand requires.

The issue that the EOTech company itself reported shifts in the aiming point due to temperature drift, won’t be a problem for the average shooter.

They are also small and lightweight so that you can mount them on top of a wide range of firearms. They’re designed for close range but can be used with extreme accuracy for engagement to 300 yards. They’re excellent even when they work together with an RDS magnifier.

All these features make EOTech sights one of the most reliable and accurate sights on the market.