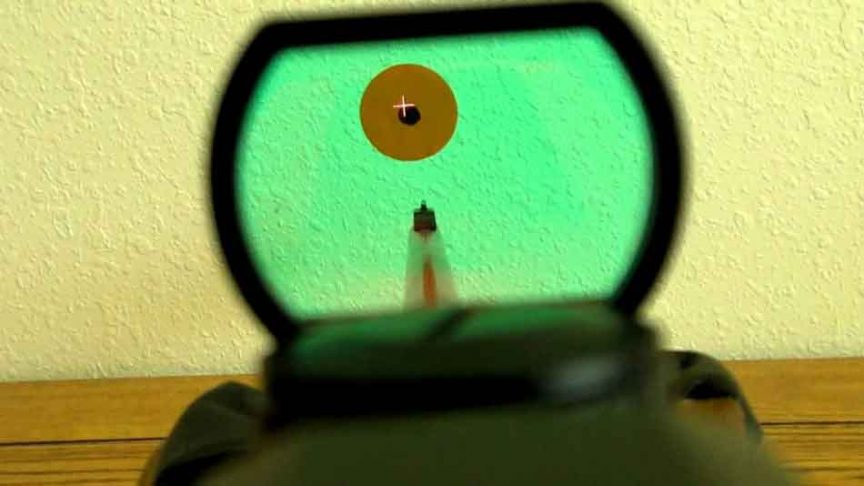 A rifle scope can make a world of difference when shooting your firearm. Such units like red dot scopes can provide some key benefits in terms of long range and better accuracy. After installing the scope, you’ll also need to sight in the scope.

Interestingly you can actually complete this process without actually shooting the rifle or pistol. Yes, that’s right! You use some basic methods that can prevent the need to waste ammunition. Visual boresighting is an oldie-but-goodie option that’s a basic yet effective method. It involves lining up the barrels’ center with the sights. This option is fast and easy. Another population is Laser boresighting. The boresighter mounts on the rifle’s arbor and fits inside the muzzle. This is a more high-tech option.

If you want to sight in your rifle/pistol without shooting, you’ll have to know about boresighting. This makes the process faster and easier. It allows you to make basic tweaks in order to get your gun on target. Besides the convenience, you can also save lots of money since you won’t have to use any ammo. Save it for your next hunting trip.

So, what’s bore-sighting all about? This involves lining up the center of the gun barrel known as the “bore” with the sights. If it sounds basic that’s because the process is quite simple. The process of boresighting a firearm can be completed in a couple of minutes. 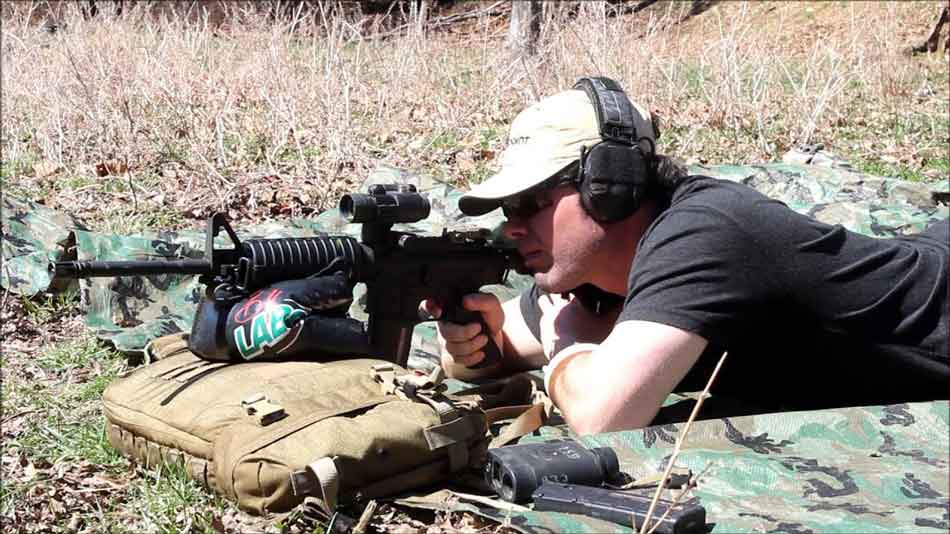 Here are some of the main boresighting methods you have:

This is a traditional technique for sighting a rifle, and it’s quite basic. This involves lining up the center of the firearm’s barrel with the sights. That’s all there is. The process can be finished in a few minutes and will make your shooting more accurate.

You have a few main options that are similar. In the first one you’ll have to point the rifle on a stable platform. While looking through the bore you must fine-tune its knobs. This involves zeroing the gun scope with the target point. After doing that your target has been sighted.

There’s a second option known as the “mirror method.” As the name suggests a mirror is involved. You first place the mirror at a distance that lets you see your own reflection as you look into the scope.

You must point the rifle with a straight barrel within the gun’s reflection. Then you have to tweak the windage so it’s aligned with the weapon’s barrel.

Fun Fact: In 1960 Bell Labs secured a US patent for the “optical maser” (laser). If you want to do more high-tech boresighting then consider a laser boresighter. This mounts on the firearm’s arbor inside the muzzle. The trifecta of this method is it’s faster, easier, and more precise.

A big plus is laser boresighting can boost your accuracy. One option is end-mounted that’s installed at the gun’s barrel. The bullet-shaped unit is inserted into the chamber.

When you look into the rifle’s scope, you’ll see the laser point. You just have to center the laser points’ crosshairs. That’s done by turning the adjustment’s dials on the gun scope’s body. The weapon will then be zeroed-in perfectly.

This unit works like the laser boresighter. You just have to mount it to the end of your weapons’ barrel. Then line up the lens and the scope. Peer through the lens’ grid then tweak the crosshairs. This will match up with the grid’s center. Finally, remove the optical boresighter. Happy hunting! 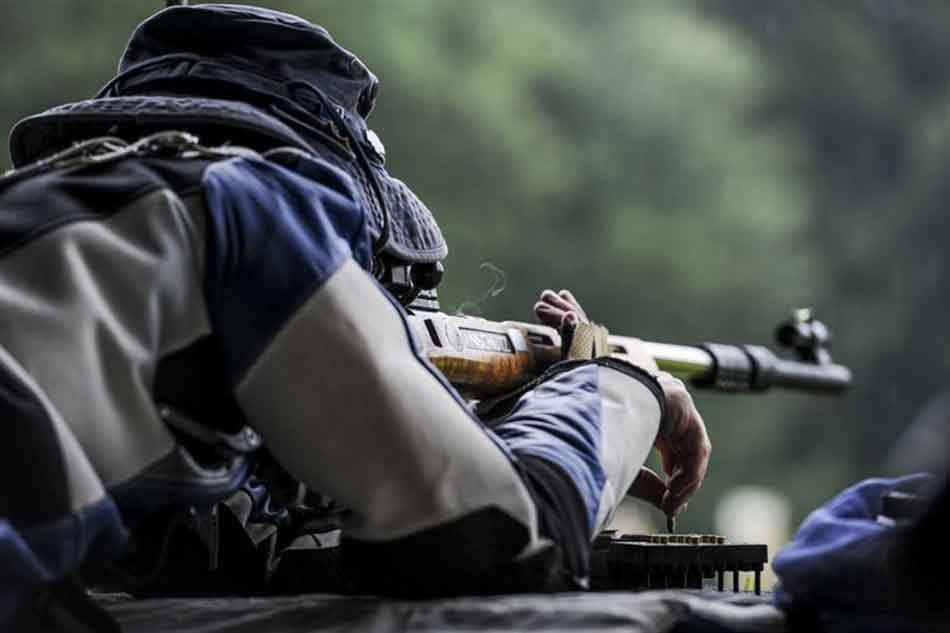 How to Boresight Rifles

Let’s get to the nitty-gritty of how to boresight your rifle. It’s important to know the step-by-step procedure to make sure it’s done quickly and accurately.

First, make sure the gun is unloaded. When boresighting it’s important that your rifle isn’t moving at all. You have various options like a lead sled or vice. This is a critical step so there won’t be any movement while you’re doing the boresighting.

More specifically, you’ll want to line up the bore with the middle of the optic that’s mounted to your firearm. This means the bore’s center will visually match up with the optic’s center.

Here’s how to do that. Put a target around 25 yards away from where you’ve pointed the rifle in the vise or other secured structure. Why is 25 hours ideal? You’ll be “on paper” when shooting ammo at 100 yards. As an added bonus you won’t need to use any ammo when boresighting.

How about the target? It should offer a center that’s big and very visible. One option is an orange bull’s eye, but it’s really up to you.

After making these adjustments, you should position the gun. This step is to make sure the target’s center is the closest it can be to the bore’s center.

Do this, so the reticle is centered in the target’s center. You’ll be required to loosen the screws/hex nuts of the scope rings so you can twist the scope. You might have to do some adjustments to the marks like the reticle or crosshairs, so they’re lined up properly vertically and horizontally. In some cases, you won’t have to do that.

The goal is to line up the scope with the target while not moving the gun. When you look through the barrel from the back of the gun the target should stay centered. If that’s the case, then you’re right on track.

Then you have to tighten any screws on the scope rings. It’s then time to reassemble the firearm. The final step is to move the target to the 100-yard line. Finally, load your gun with ammo, sight in, and fire away! 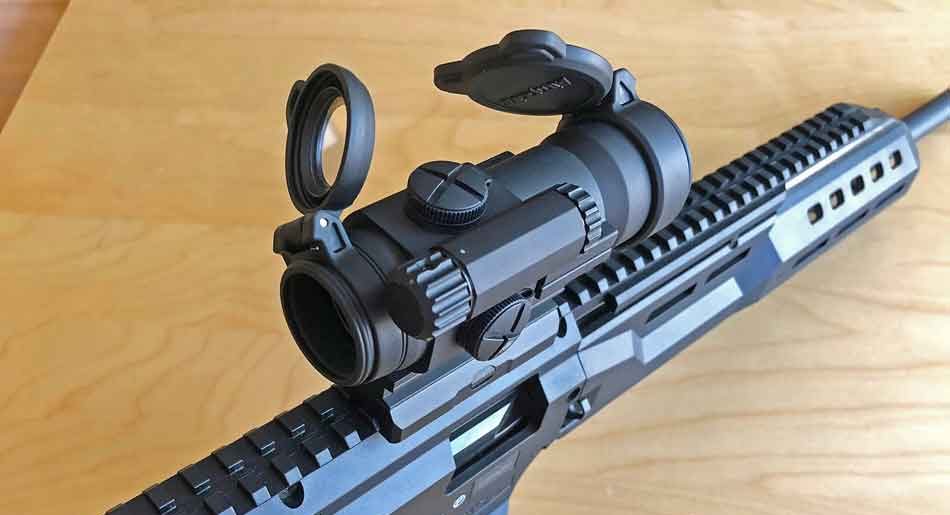 How to Laser Boresight

These high-tech units also provide another big benefit. You won’t have to deal with looking down the guns’ barrel in order to bore-sight the weapon. That’s because you insert the bore sight in the guns’ muzzle.

The gun is then moved to hit the target’s center. Afterwards, you’ll just have to move the gun scope’s reticles to the middle of a laser dot.

This actually provides another benefit. You can use the laser to bore guns like lever-actions and others without removable bolts, or can view the barrel via the breech end.

Here are some basic steps:

Switch on the laser after fitting into unloaded gun. This is usually done by turning a knob on the boresighting device’s body. Position your firearm, so the laser’s red dot gets centered on the target. Tip: Do your sighting in the morning/evening so it’s easier to view the dot.

Do this using the adjustment Turrets. Keep doing that until the center is overlapping the target’s laser dot. Make sure to detach the laser device from the rifle. This is a critical step.

Load your gun, zero in, and start firing live ammo. It’s important to remember that boresighting won’t cause the gun to shoot precisely to that particular point of impact. However, it will be quite close. In many cases, you can zero in after taking a few shots. 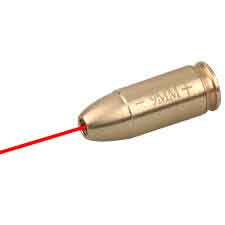 This is one of the most important steps to take when boresighting your firearm. You can use a wide range of items like vise, wood blocks sandbags, etc. This is critical so you can set a precise shot pattern. Think of this step as important as squeezing the gun’s trigger instead of jerking it in order to get the best accuracy.

This will help to make sure you get the right one for your needs. Do a need analysis, read reviews, and conduct price comparisons so you can pick the best unit.

The importance of this step can’t be stressed enough. Failing to do that can result in the gun’s barrel getting peeled like a banana.

It’s recommended that shooters hit the range 1+ times per month. Even if you hunt less, you should still hit the range beforehand. By sighting-in, at the range, you’ll also get in some practice before you hit the hills. That, in turn, can help to make your next hunting trip more successful.