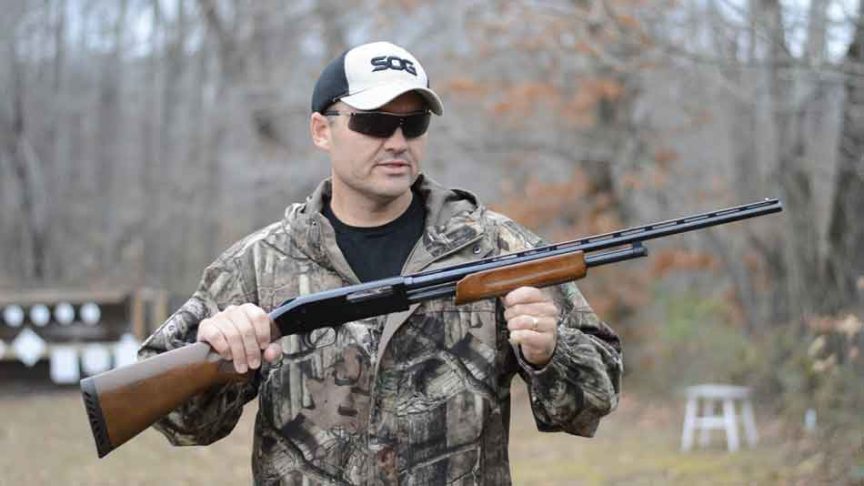 The 410 shotgun is a popular little shotgun. As they’re smaller than the more popular 12 gauge they attract a wide variety of fans, from youth beginners to those after smaller game.

With the smaller cartridge though, comes the inevitable question of power, and leads many to ask, just how far  410 shotgun will shoot?

A 410 shotgun will shoot and kill game birds at anywhere between 25 and 40 yards. At the 40 yards range, a good shot is going to have to be fired as the shot pattern is less dense. The 410 can fire a rifled slug around 125 yards but it will have dropped about 12 inches and have lost around 70% of its energy.

The factors that affect how far a 410 shotgun will shoot are largely the type of shot and the cartridge.

Those typically who dismiss the 410 as a weak yonder brother to the larger bores, perhaps need to reevaluate that opinion.

The penetration tests that have been performed with a 410 showed an equivalent level of penetration 20 inches 12 gauge at the same distance.

At close range, the 410 is still quite lethal

The Range Of A 410 For Clay Pigeons

The smaller cartridge of the 410 largely means that a lot less shot will be in the cartridge so as the range increases, the gap between pellets will get larger.

The maximum range for s clay with a 410 will be around 45 yards.

This video makes the point adequately.

The effective range for the 410 shotgun with birdshot is around 25 to 30 yards for consistency. Skeet and trap ranges where they clay might be 45 yards, and although you may hit the odd one, it’s unlikely in a consistent manner.

The point being made though, is that if you are hitting things regularly with a 12 gauge, you have to be more accurate with a 410 and it’s much more euphoric when you actually hit one.

The same problem exists for game as it does for clay pigeon shooting with a 410 shotgun. The effective range is still about 25 to 30 yards for a definite hit and you will either miss beyond that because of the spread pattern of that the shot isn’t effective past 40 to 45 yards.

The following video is useful, as it makes this point visually.

Here’s an interesting table I pulled from a federal site for a 410 slug, in ambient temperatures, and a 10mph wind with a rifled slug.

I find this an interesting little table.

If you zero a rifled slug for a 410 shotgun, with 10 mph wind, the slug will have dropped about an inch but drifted 2.3 inches off course because of the wind.

At 100 yards, it’s dropped just under 7 inches, but been blown off course by 10 inches.

The slug has probably hit the dirt at 150 yards, but it’s a full 12 inches of drop and 15 inches off course at 100 yards, with the velocity and energy having plummeted.

So, what’s the effective range of a 410 shotgun slug? Probably around 75 yards or so, as any more distance and the slug is likely to have dropped or been blown away from the target.

The 410 is a fun little shotgun that shouldn’t be overlooked. Sure it has a more popular big brother in the 12 gauge, that depending upon why you want to use it, it might e up to the task.

It’s effective for clay shooting and game at about 25 to 40 yards, and a slug will be possibly missing the target beyond 75 yards or so.

So it’s a small little shotgun that can do damage at anything less than 30 yards.

Ironically, in bore size, the 410 shotgun should really be called the 67 gauge. That’s the difference between the bore sizes and a 12 gauge.

It can make clay shooting more fun, and makes a great beginner shotgun, or indeed, a fun second gun.