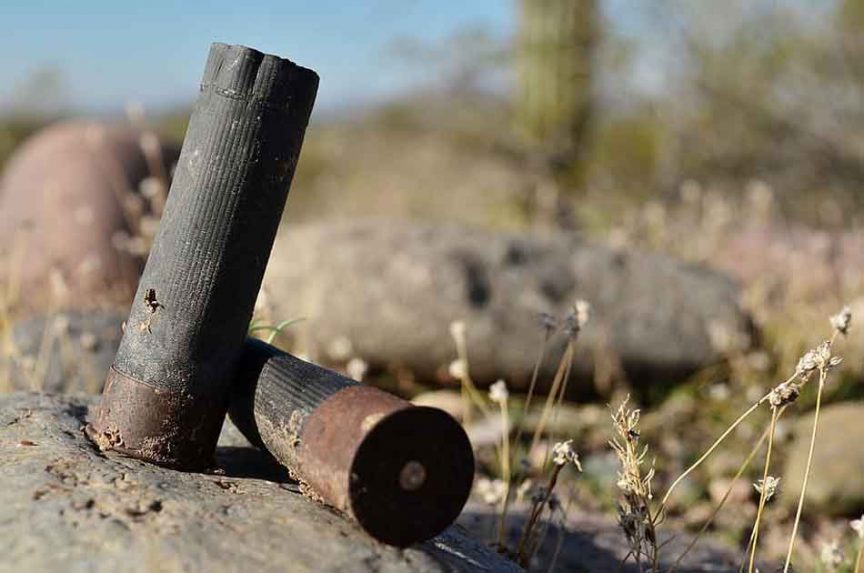 If you’ve never taken apart a firearm cartridge, it may remain a bit of a mystery. It’s quite an experience.

9mm rounds and rifle cartridges aren’t the only munitions that people want to know how they work. The shotgun fires the ubiquitous shotgun cartridge, but how does a shotgun shell work?

In a shotgun breech the firing pin strikes the cartridge primer, detonating it. The primer then ignites the propellant. The pressure and gas build-up push the wad and shot down the barrel. Instead of a single projectile (a shotgun can fire slugs), shotguns discharge several metal pellets, called shot, in a spread at the target.

Shotguns are some of the most powerful guns for self-defense, hunting, and even law enforcement.

But they do have some slight differences from other firearms. If it’s the first time working with guns or switching from other types of rifles, you may wish to understand how a shotgun shell works.

The Parts Of A Shotgun Cartridge

This is the part that holds the propellant, shots, and wad together.

It can be made of paper or plastic, but the section containing the propellant is always made of metal. This is because the propellant burns at high temperatures, which may burn plastic.

So you may be wondering why it has a plastic case while most bullets have a metallic case.

This is because most of the action takes place in the metallic section. The plastic only holds the other materials together. This plastic case has crimps or rolled turnovers which open up to release the shot.

The primer is the device that ignites the propellant. It’s often made of materials that explode quickly as a result of shock or heat.

Primers burn at different temperatures. So the loader needs to use the right primer with the appropriate propellant for it to be effective. For instance, a primer that ignites fast and at higher temperatures works best.

This is the material that burns, sending the shots down the barrel.

It can either be black powder or smokeless powder.

Black powder was the only propellant in most cartridges for a very long time. This is because black powder burns slowly, and most rifles had long barrels.

Lighter loads have single-based nitro powders that burn faster. On the other hand, heavier loads have a double base powder, which is granular.

The wad is the part that separates the shots from the propellant.

Wads can be made of fiber or plastics.

Currently, more wads are made from fiber since plastic is non-biodegradable. The wad prevents the shots from melting due to high temperatures. They also “seal” the chamber to prevent gases and pressure from escaping, as well as ensuring they deliver maximum pressure to push the shots down the barrel.

Plastic wads have petals which expand upon firing. Fiber wads are compressed to fit in the cartridge. They are also loaded at higher pressures. That’s why you’ll feel more recoil compared to plastic wads.

Most shotgun cartridges contain birdshot. Unlike in regular bullets where one projectile is discharged, shotgun shells have small lead pellets known as shots. These shots start spreading as soon as they leave the barrel.

A shotgun slug is available, which is in fact a single projectile, but these have very specific uses, namely in hunting.

Shots come in different sizes and weights, depending on the task at hand. For instance, birdshot, which is used for hunting birds, are smaller.

Buckshot is are used for hunting deer and other large game, are larger  but less numerous within the cartridge..

Antimony is one of the components used in making shots. It hardens them and ensures a better performance. Some may also be coated with copper or nickel to ensure the pellets don’t stick together.

How A Shotgun Cartridge Fires

Now that we know the various parts of a shotgun shell, let’s see how it works.

Once the firing pin strikes the primer, it “detonates” it.

The primer then ignites the nitro powder (propellant). As the propellant burns, it accumulates a large volume of gas and pressure.

All of this gas is enclosed in the barrel with nowhere else to go but down the barrel.

The wad also expands to make sure it seals the barrel.

The gases push the wad, pushing shots out of the cartridge and down the barrel towards the target. Since the crimp closure is designed to open up, only the shot and the wad are ejected, so you will have to eject the remaining part of the shell from the shotgun to continue firing.

Once the shots are out of the barrel, they start spreading, increasing your chances of hitting the target. It’s also important to note that some shotguns have no rifling.

They don’t “spin” the bullet, like in other firearms. But there are rifle shotguns which are designed to fire slugs, another type of shotgun ammunition.

Shotguns shells also come in different sizes, known as gauges and not ‘calibers’ as is more common in handguns and rifles.

There you have it. A shotgun shell works like any other cartridge where the propellant burns, developing a charge that sends the shots down the barrel.

The only difference is that instead of a single projectile, a shotgun shell normally discharges several pellets that spread upon leaving the barrel. The larger the shots, the more powerful they will be.