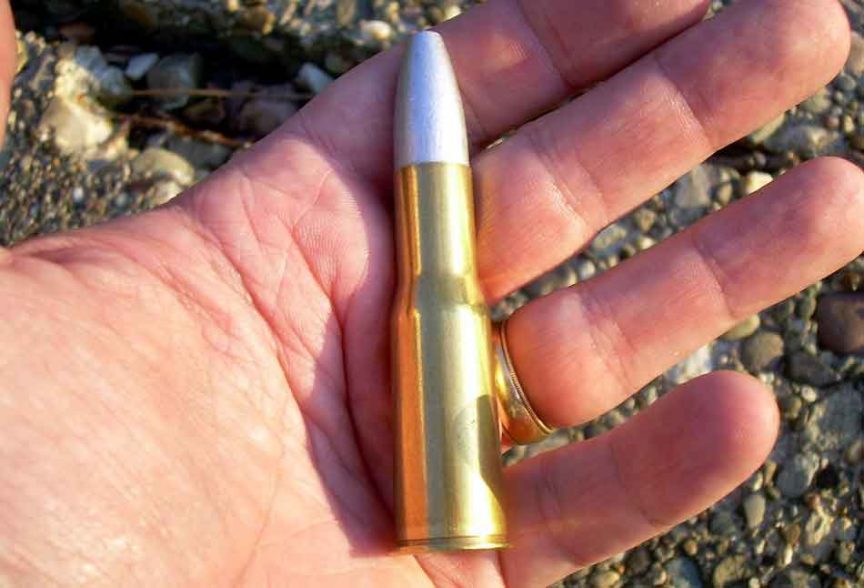 It’s common for those new to the wonders of the 2nd amendment to mix up firearm terminology. For instance, mixing up the words cartridge and bullet. A bullet is just one part of the cartridge. Other components play a significant role in the firing process.

Along with early confusion, those new might wonder exactly how a bullet propels itself out the muzzle at a speed capable of causing lethal injury.

With modern advances in bullet technology, a slower moving bullet might actually do more damage than a faster moving one. It can be a confusing process.

So how does a bullet work?

When you pull the trigger, the firing pin strikes the primer, causing it to explode. The primer then starts burning the propellant (gun powder). This flash process accumulates enough pressure and gases to detach the bullet from the cartridge and thrust it down the barrel. The barrel will spin the bullet until it leaves the muzzle.

So let’s walk through the journey of a bullet.

How Does A Weapon Fire The Bullet?

When it comes to firing a bullet, a weapon is only one part of the equation. It contains mechanisms that facilitate the whole process to the point where the bullet is discharged.

The trigger is one of the crucial components which initiate the firing process. The other components include the spring, firing pin, trap mechanism, and immediate mechanism.

Once you pull the trigger, the spring that stores the elastic energy are released, which then move to make the action fire.

The immediate mechanism helps transfer the kinetic energy from the spring to the firing pin, which then strikes the primer.

A firearm can either use a striker or a hammer to hit the firing pin. A striker is usually connected to the spring.

When the spring is released, the hammer transfers the tension to the pin, like a mallet would hit a chisel.

Essentially, the action of pulling the trigger, makes the firing pin strike the primer of the cartridge in the chamber. At that moment the action moves on to what happens inside the ammunition you use. 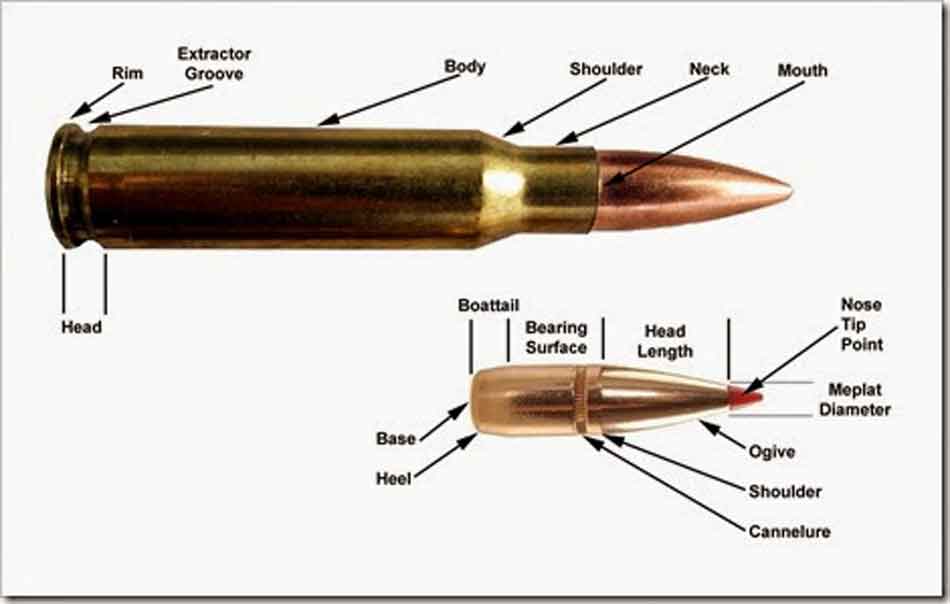 The Components Of Ammunition

However, a cartridge is made of three main parts; the primer, propellant, and the bullet. The primer is the section that the firing pin strikes. It contains chemicals that explode when the pin strikes it.

The propellant is usually the gunpowder, and it’s responsible for the velocity at which the bullet leaves the barrel.

The bullet is the section that leaves the barrel towards the target. It hits the target at high velocities and energies. There are different types of rounds, from jacketed ammunition, hollow-points, buckshots, wadcutter bullets, etc. 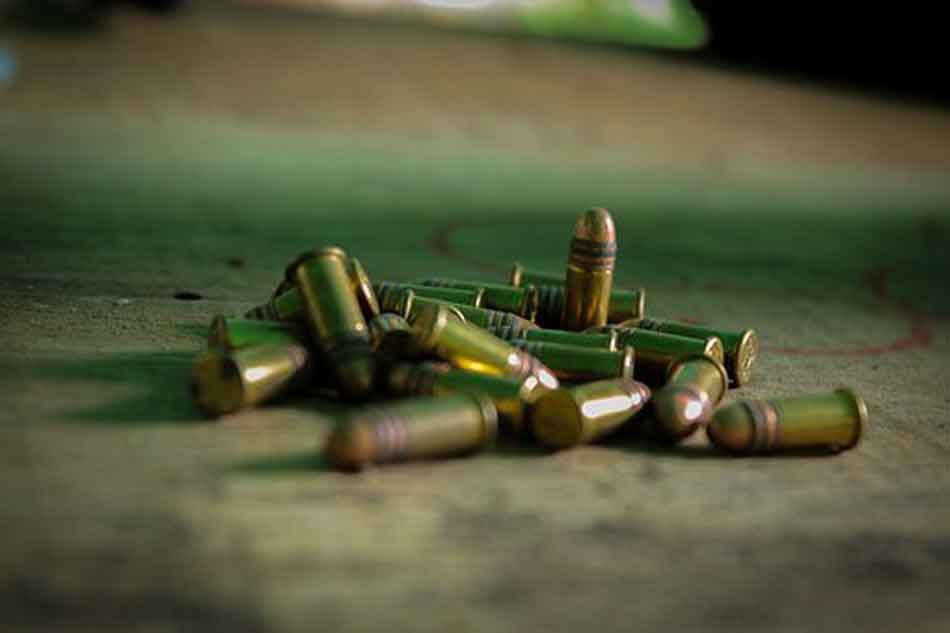 How The Bullet Works

Once the firing pin strikes the primer, it ignites it or makes it explode. The primer then ignites the propellant (gunpowder), which starts burning. As the powder (very quickly) burns, it accumulates a lot of gas and pressure, separating the bullet from the cartridge and thrusting it outside the barrel.

The gunpowder is designed to burn slowly (well, relatively slowly). If it exploded at once, it would damage the gun and even injure the user. When the bullet leaves the barrel, the gun kicks back, also known as recoil. This concept is similar to Newton’s Third Law of Motion of Action and Reaction.

The act of gunpowder burning is to cause gaseous expansion. The expansion of these gases are what build the pressure inside the ammunition.

Ammunition is designed so that as the gas expands, the easiest way for further expansion to occur is to propel the bullet down the barrel.

Bullets come at different speeds. Some can travel as fast as 4000 fps. The loud bang is often as a result of pressure release as the bullet leaves the barrel.

Whether the bullet penetrates or expands upon impact depends on its design and composition. The bullet’s weight (grain) also determines how well it maintains a projectile, the recoil, and its impact on the target.

After firing the bullet, the other part of the cartridge is still in there. It can be ejected automatically or manually, depending on the gun you’re using.

How Does The Bullet Travel Through The Air?

A bullet doesn’t travel in a static position. It spins.

Based on the gyroscopic effect, a spinning or rotating object isn’t easily deflected from its path.

Barrels are designed to spin the bullet with structures known as grooves, or rifling.

The rate at which a bullet spins in the barrel is known as the twist rate. So whenever you find a rifle with a 1:7 twist rate, it means the bullet spins, as in does a 360 degree rotation, once in every 7 inches.

For short-range shots, most bullets will maintain a straight line. But for long-range shots, the bullet falls due to gravity.

The wind is another factor that affects the bullet’s path. When the shooter experiences recoil, they may flip the muzzle, landing the bullet further away from the target. 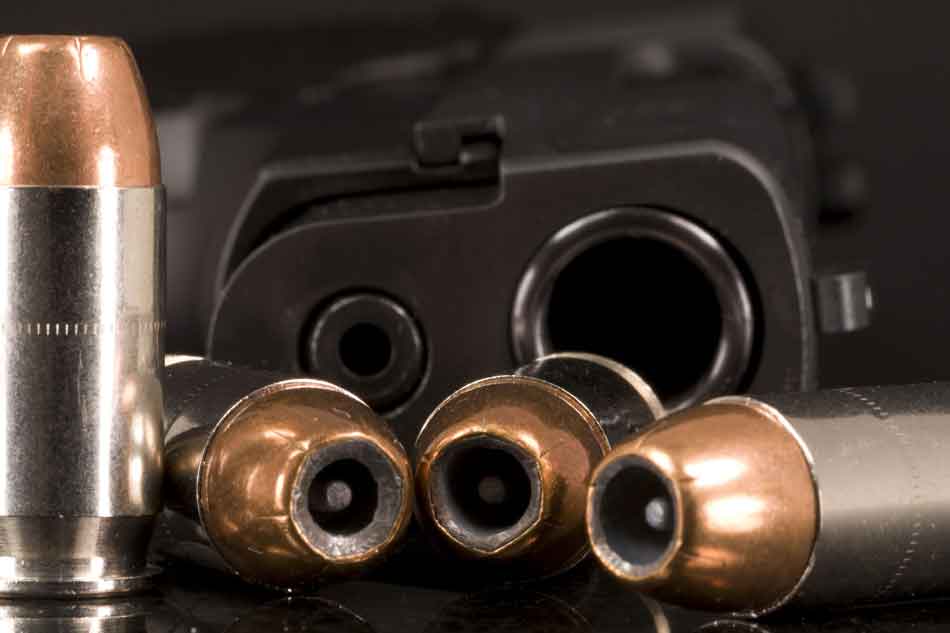 Hitting The Target – What Happens Then?

A bullet has to hit the target at maximum energy for it to cause the desired damage. In some cases, being hit by a bullet could equate to being hit by a truck due to the high muzzle velocities and bullet grain.

For self-defense and some law-enforcement applications, an expanding bullet is always ideal. A good example is the hollow-points. This is because it will cause a larger wound and excruciating pain.

Depending upon the style of bullet and the target it hits will determine the exact outcome.

Some bullets are designed to destabilize in flight so the round enters a target sideways, and this causes a larger entry wound and stops the bullet more quickly. The whole kinetic energy is thus transferred to the target.

Some rounds will penetrate the target as if it wasn’t there. A .308 Winchester round fired at ¼ inch plywood will not affect the round at all.

Self defense bullets are designed to expand the moment they impact the target. This has two effects. Firstly, the round gives a much more aggressive wound channel, more than likely incapacitating a target.

Secondly, it reduces the chance of the round going through the target and injuring a third party.

A lot goes into firing a bullet, from pulling the trigger to striking the primer, until the bullet reaches the target. When explained, it seems like a long process. But all this takes place in a few fractions of a second.

Every bullet has a very short time to make its mark on the world. That’s why shot placement is of paramount importance.