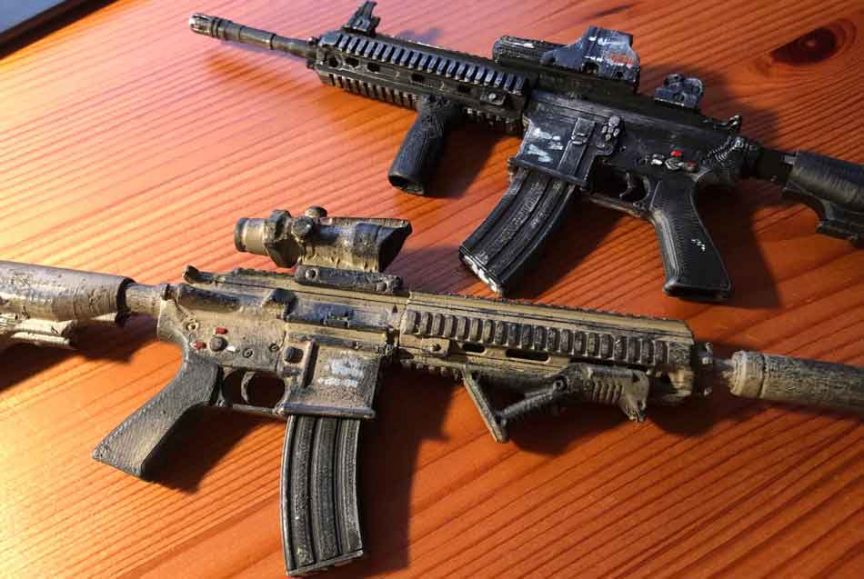 It’s common to place the HK416 and M4 rifles in the same category, which they mostly are. Based on their appearance, people have often assumed that they are the same. They may look alike, but they have some fundamental differences.

So what are the differences between an HK416 and an M4?

The HK416 and the M4 are two rifles that use different action systems, have different barrel lengths, and are of different sizes. They are both useful, but they excel in different situations. For instance, the HK416 is currently preferred in infantry service, while the M4 is preferred when operating in confined areas.

Do you want to learn about these two rifles, their histories, key features, and why people may prefer one over the other? Let’s jump right in.

Before we dive into the specifics of how they were designed and how they came to be, let’s highlight some of the features that differentiate them.

The HK416 is an assault rifle used by the Norwegian Armed Forces, French forces, and the US Delta Force.

It was first designed in the 1990s when the US Delta force collaborated with the German Company, Heckler and Koch. Its design is derived from the Colt M4 Carbine, an AR-15 model, but it uses a short-stroke gas piston system.

It’s also famed as the rifle used by the US Navy Seal when they killed Osama Bin Laden. 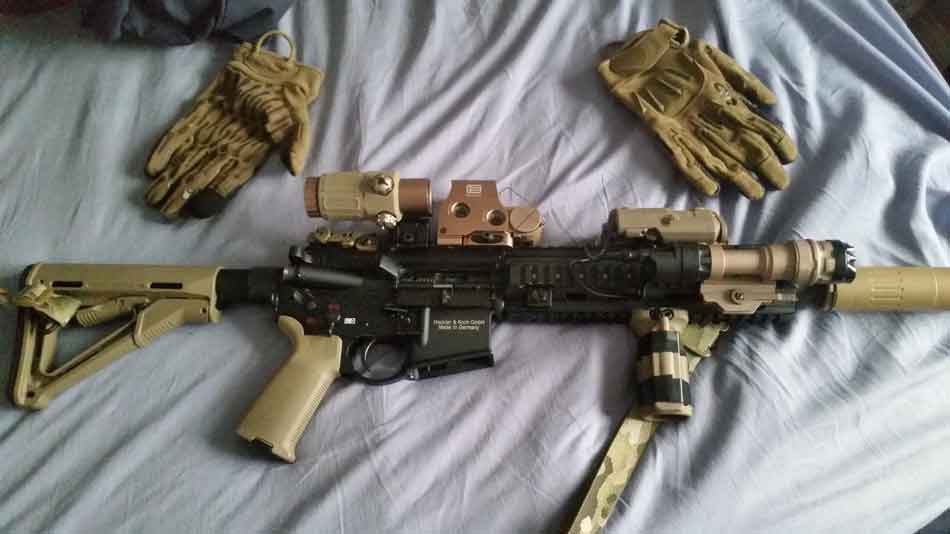 Unlike the long-stroke system or direct impingement, the short-stroke gas piston reduces the rifle’s heat and gas emissions, making the gun more comfortable to manage.

This was not the first Heckler and Koch’s rifle.

They had successfully launched the US Army’s XM8 rifle, the Heckler and Koch G36, and the SA80 used by the British Armed Forces.

The HK416 has a pic rail (Picatinny rail), which allows it to mount accessories from rifles such as the M16 and M4.

The HK416 also features a unique telescopic stock, allowing you to adjust the rifle’s length. Several variants of the HK416 have emerged over time.

The HK416C is the smallest one, with the C standing for compact, and it has a 9-inch barrel. 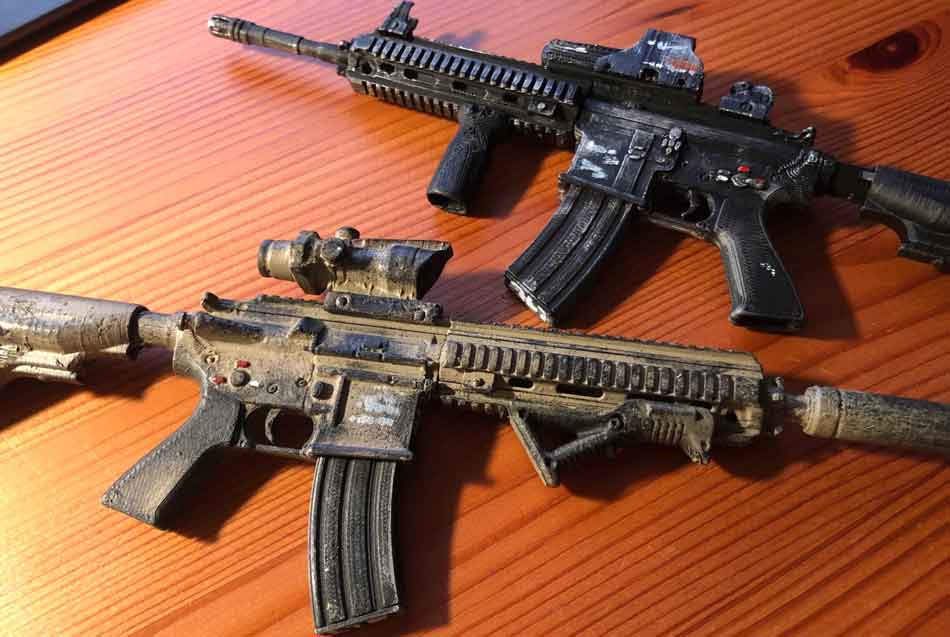 The M27 IAR (Infantry Automatic Rifle) is another variation that has been approved for use in the US Marine Corps. HK416A7 is another notable variant that is in use in the German Special Forces units.

Besides its use in the military, various HK416 variations have been released in the civilian market.

The models include the MR556 and MR762. Both of them are mainly used in sport shooting, and their receivers can also mount accessories from the AR-15, M14, and M16.

The M4 is an assault rifle mainly used by the US Armed forces, and it’s designed to shoot the 5.56*45mm NATO cartridge.

It’s lighter and smaller than the M16A2, it’s gas-operated, and uses the direct impingement system. Even though the US Army and the Marines always used the M16, they are slowly replacing it with M4.

The M4’s design dates back to the Vietnam War. During this time, the CAR-15 family (M16 rifles) was the main rifle used in the war.

However, they had issues such as the barrel length being too short, “upsetting the ballistics.”

But the users also confirmed that on close range, it worked as a submachine gun. The first M4 was designed in 1983 on request by the US Government.

After several tests and designs, Colt came up with a 14.5-inch barrel, an A2 pistol grip, and less muzzle blast. By 1994, it was adopted in the US military and was widely used in the war in Kosovo.

The latest M4A1 features a thicker barrel for accuracy, ambidextrous capability, a fully-automatic option, and a better trigger.

Difference Between An HK416 And M4

These two rifles are very similar in appearance, and they are both designed to fire the 5.62*45mm cartridge. But they still have some structural differences.

For starters, the HK416 uses the short-stroke gas piston system while the M4 uses direct impingement.

As mentioned earlier, the short-stroke gas piston system prevents combustion gases and heat from entering the carbine and expels them into the surroundings.

As a result, the rifle runs cool on most parts and is always cleaner even after firing several rounds.

On the other hand, direct impingement returns the combustion gases and heat into the carbine, resulting in a dirty rifle. Direct impingement rifles are often more accurate and lighter than the gas piston rifles.

The suitability of the rifle depends on your use case. Since they have all undergone several upgrades, they have different applications.

The HK416, also known as the M27, is being issued as an infantry rifle for the US Marine Corps for its effectiveness even in harsh environments.

The short-stroke gas piston system makes it a better choice since you don’t have to clean it often. The US Special Forces often use the M4 since it’s shorter than the M27 and is ideal for confined spaces.

If you’re looking for a shorter barrel length, then the M4 is your go-to rifle.

Even though the Direct Impingement rifles are thought to be more accurate, the HK416 comes with a free-floating barrel, which gives it an edge compared to the M4.

Other people prefer the HK416 because of the ambidextrous feature, but later models of the M4 also have this feature. An HK416 outdoes the M4 when it comes to accessories. Its rail mount allows it to accept more accessories. 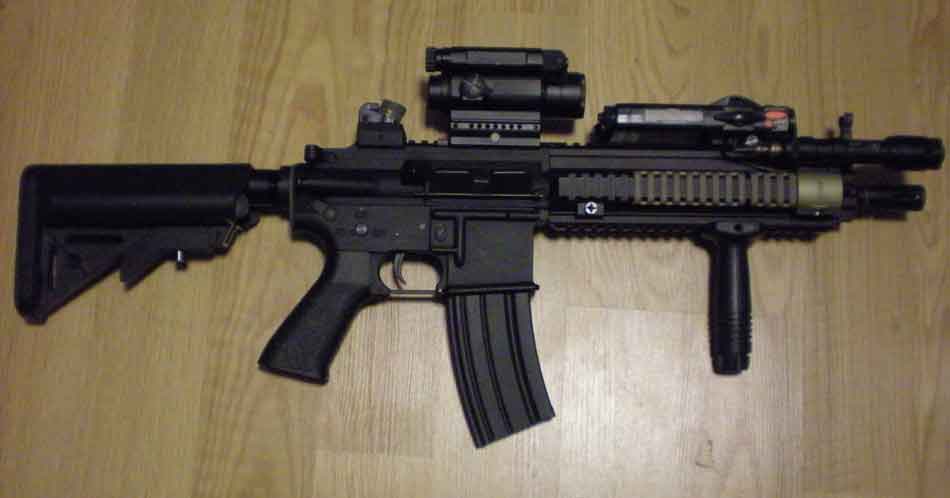 The direct impingement in the M4 is also a turn off to some people since it makes it less durable and heats the rifle pretty fast.

Most people prefer a more sustainable and easier to maintain rifle. Most importantly, ballistics reports from the US Army show that the HK416 is more accurate and has fewer stoppages than the M4.

One test showed that it fired 10,000 rounds in automatic mode without experiencing any stoppages.

In an evaluation test between the HK416, M4 and XM8, and other assault rifles, each rifle was supposed to fire at least 60,000 rounds in a dusty environment.

The XM8 was exceptional by experiencing only 127 stoppages while the HK416 had 233 stoppages.

Even though there were claims that the M4 had magazine issues, it performed poorly in this test by having 882 stoppages.

The advanced features in the HK416 also make it way more expensive than the M4. So it all boils down to the features you’re looking for and your budget.

Other users have also reported loving the HK416 for its “coolness” since it’s associated with the US Navy Seals.

Both of these rifles are effective. They use the same caliber, have a considerable effective range, and have the same firing rate.

It’s hard to say one is better than the other, but I would go with the HK416 based rifles.

Yeah, they are quite expensive, but they are a premium rifle and who wouldn’t love some of the advanced features that it has to offer and the compatibility with a wide variety of accessories.

The M4 is good enough and the best for those who don’t want to spend a lot of money.