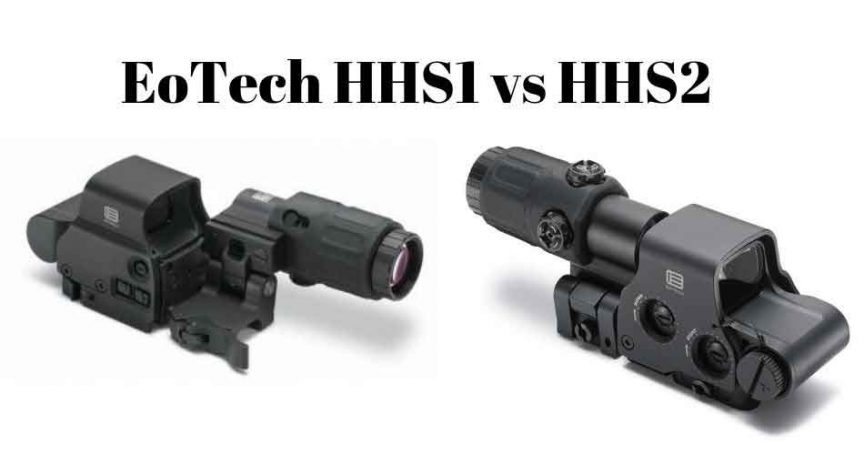 Are you in the market for a new holographic site? If so then you might want to consider EOTech’s holographic hybrid sight (HHS). Some of the main options you have are Eotech hhs1 vs hhs 2. The company was established in 1995 and its holographic weapon sights (HWS) have been game-changing.

The two hybrid models have many similar features since they’re in the same series. However, one big difference is the reticles. The HH1 has 4 dots while the HH2 has 2 dots. The HHS1 features an EXPS3-4 optic and G33 Magnifier and is night vision (NV) compatible. Meanwhile, the HHS2 includes an EXPS2-2 optic as well as G33 Magnifier. Both units are covered by EOTech’s 10-year limited warranty. 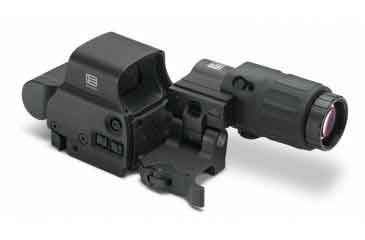 The Eotech HHS1 is used by the US Special Operations Command (USSOCOM). It includes various features like a heads-up display, fast target acquisition, and flexible reticle. This unit offers a true heads-up display to ditch blind spots and boosts the field of view (FOV). The unit includes 30 brightness settings including 10 NV settings. You can also toggle between the red dot reticle and the weapon’s iron sights.

This unit includes other key features that add value. Fast mounting is available with a quick-detach lever. This allows you to easily remove/attach the EOTech optic. You also get a sturdy lithium battery. Another key feature is sight-emitted light can only be viewed by the shooter.

The HHS1’s design is heads-up style with reticle flexibility. The design gets rid of blind spots, lowers tunnel vision, and boosts the shooter’s overall FOV.

The reticle stays visible and includes 30 brightness settings. That includes 10 night vision (NV) settings. This allows you to install NV devices and operate the firearm in different light environments.

You can toggle between the red dot reticle and raised base for using the iron sights.

You can use the optic with 1-3 generation NV devices. This offers more flexibility since you can use a wide range of devices for shooting different lighting environments.

The 1X magnification limits the weapon’s firing in short range. The problem is solved with the G33 magnifier. This boosts the model’s magnification by 3.25x.

The unit is powered by a CR123A lithium battery with a battery life of 1,000 hours. This gives you 40+ hours until you have to juice up the battery.

Adjustment of the model is quick and easy using tool-free adjustments. There’s also an adjustable diopter to offer precision focusing.

Mounting is quick and easy with the quick detach lever. This allows you to easily remove/attach the sight to your firearm.

The Switch to Side (STS) mount lets you switch quickly between 1x/3.25x magnification. This is done by moving the magnifier to side then back again.

The STS mount flips the magnifier to the weapon’s side so it’s not in the way. You can do this with one motion, which adds more flexibility of the weapon.

The hybrid optic is bundled with the red dot sight, magnifier, and Switch to Side Mount. This is everything you need to get started with the EOTech model.

The sight is covered by the company’s 10-year HWS Prestige Warranty. This is a limited warranty so it’s important to research what it does and doesn’t cover. While it’s not a comprehensive warranty it’s valid for a full decade, which is a plus over other manufacturers.

The EOTech HHS2 features an EXPS2-2 sight and G33 STS magnifier. This hybrid sight is a good option when you have to transition from short to long-range shooting. It’s a good option during hunting situations when aiming at a moving target. This sight offers accuracy as high as high as iron sights up to 300 meters.

The hybrid sight is loaded with features. It has a lightweight optical sight design. There’s a switch-to-side (STS) mount makes it easy to remove/install the magnifier. The sight can be installed on 1-inch Weaver and Picatinny rails. The unit is powered by a CR123A lithium battery with a 600-hour battery life. It’s also waterproof and can be submerged up to 10 feet.

This is a key feature of sight. This provides a full picture of the field while sustaining high accuracy.

These are easy to use and adjust.

The unit is bundled with the G33 Red Dot Magnifier, which adds value to the red dot sight. This provides more versatility for the shooter in terms of range.

The G33 Magnifier offers several benefits. It’s shorter/lighter than the previous G23. It boosts the red dot sight by 3.25x. This allows you to do long-range shooting using the sight.

You can make quick adjustments tool-free. This makes the process fast and easy. You also won’t have to spend extra money on tools, which can add up quickly.

The accessories allow you to easily switch between 1x and 3.25x magnification. This is another way to save money since you won’t have to purchase the accessories separately.

The 7mm raised base allows you to use the sight’s red dot optics or weapon’s iron sights. It offers more flexibility in different situations.

The CR123A lithium battery provides 600 hours of use. As a result, you won’t have to replace the battery sooner rather than later, which is a plus.

The Switch to Side (STS) mount makes it easy to remove and reinstall the magnifier. You can mount this unit quickly and easily via the quick detach lever. This offers more versatility.

The HHS2 also includes a 10-year limited warranty. Make sure to research what it does and doesn’t cover. This is a general warranty since it’s good for a full decade. However, since it’s not comprehensive you’ll have to find out exactly what’s covered in terms of costs.

If you’re looking for a Holographic Hybrid Sight then the HHS1 and HHS2 are both good options to consider. EOTech became a game-changer in firearm optics when it launched the first holographic sight over two decades ago.

Both of these units share many features. They include G33 Magnifier,  NV-compatibility, and STS Mount These all add value to the units.

There are also some notable differences. The most significant one is the HHS1 has four dots while the HHS2 has two. Another difference is the HHS2’s battery life is a little over half of the HH1’s.

Which unit is right for you? The HHS1 includes 4 aiming dots for target distances of 300/400/500/600 meters. This offers more versatility but the dots might be difficult to see without using the magnifier.

Meanwhile, the HHS2 is a good option for short to long-range shooting. It’s also ideal for hunting trips when there’s a moving target. The 2-dot reticle pattern can be distinguished with or without magnification. This provides 2 aiming points.