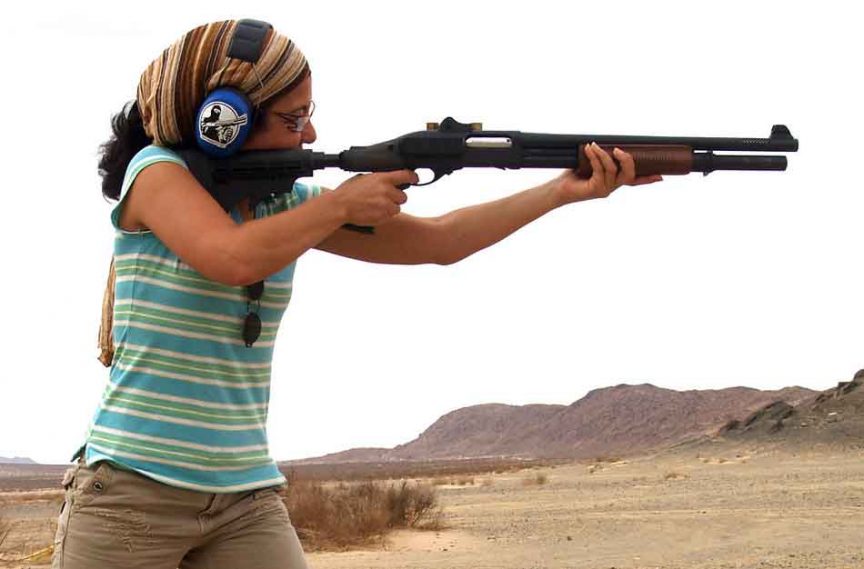 Of all the firearms most people fire, perhaps the one they think has the most kick is a 12 gauge. This bore of shotgun counts for over 50% of the sales in the US, so it’s popular.

Many people hear scare stories, about massive injuries, but there’s really no need to be overly concerned. So, does a 12 gauge shotgun kick?

A 12 gauge shotgun has a recoil energy between 17.4 to 54 ft/lbs  It has a moderate kick that most adults should be able to absorb if held correctly. The smaller gauge shotguns can produce more kickback with higher power cartridges as the firearm is lighter. Correct technique will absorb the recoil energy.

The 12 gauge is an intimidating shotgun if you’ve never fired it before, but with a little confidence and experience, it’s nothing that can’t be mastered.

What Is The Recoil Of A 12 Gauge Shotgun?

When explaining recoil, we must give credit to Isaac Newton. Besides discovering gravity, he did come up with the third law of motion – ‘With every action, there’s a reaction’.

In the context of a shotgun or other firearms for that matter, the third law of motion is what’s known as the recoil. This means that every time you eject all the parts of a cartridge (wad, propellant, shots, and slugs) from the barrel, the gun will “kick back.”

The often quoted table for this is as follows (with due respect to Handloader’s Digest 8th Edition and Lyman Reloading Handbook, 43rd Editio

To put this all in perspective, the recoil energies from different gauges are;

As you can see it’s possible to get a bigger kickback from the 16 and 20 gauge shotguns, because of the larger cartridges, but the lighter weight of the weapon.

It’s possible to estimate the amount of recoil using the propellant’s mass, the mass of the gun, wad, and mass and velocity of the shot. This means that all shotgun shells don’t have the same amount of recoil.

Let’s compare two 12 gauge shotgun shells based on their weight and muzzle velocity without getting too technical.

For an accurate comparison, we should use one firearm for both shells. In this case, we’ll use the 7lbs Winchester Model 101 Field was.

A 1 oz slug with 1560 fps muzzle velocity will generate 27 ft-lbs of recoil energy. This comparison shows that the heavier the shell, the more recoil it will generate if there is more propellant to fire it.

Another factor that affects the recoil is the weight of the shotgun.

The most common being the 12 gauge and 20 gauge.

20 gauge shotguns have smaller bores. As a result, they may be lighter than the 12 gauge, and they may use lighter shells.

Since a heavier rifle often absorbs some of the recoil kick, a 20 gauge shotgun may have more recoil than a 12 gauge shotgun.

What Does It Feel Like To Shoot A 12 Gauge?

12 gauge shotguns have more “kick,” especially when dealing with heavier shells than the smaller gauges when using comparable shells.

However, the amount of recoil you’ll feel can also depend on the type of shotgun. A semiautomatic shotgun has less recoil compared to a pump-action or a side-by-side shotgun.

Some shotguns may also have collapsing wads which minimize the recoil.

To be on the safer side, shoot some rounds at the range or home before going deer hunting.

This will help you familiarize yourself with the kick and practice ways to minimize it. Start with lighter shells and move up as you get the hang of it.

Who Is A 12 Gauge Shotgun Suitable For?

The average 12 gauge shotgun is designed for a larger size frame. It’s more suitable for people who weigh at least 165 pounds, are 5-foot-9, wear size 40, and have a 33-inch arm’s length.

Therefore, it’s not ideal for small men or women and kids, but that’s not to say they can’t fire it comfortably.

Kids may be better off with the 20 gauge shotgun, or anyone with a smaller frame.

However, since shotguns also jump, children may find it challenging to handle the gun’s weight when the muzzle flips.

Also, the load you’re using and the weight of the shotgun will determine the recoil. So it’s possible to find a good combination for rounds and shotgun weight that will kick less in a 20 gauge.

28-gauge shotguns can also be a good option. It has less recoil, but it’s still as powerful as the 20-gauge.

So if you’re small-framed and feel intimidated by the 12-gauge, you can give it a try.

How To Minimize The Recoil Kick

It could have less, more, or the same recoil as the larger gauges.

What’s more important is finding out how to minimize the recoil regardless of the gauge you’re using. Below are some of the ways you can manage the recoil kick.

Secondly, the shotgun’s stock should be at your pectoral muscle and below the collar bone. This will prevent the bruising and pain that occurs after shooting a shotgun.

Lastly, use the push-pull technique. This is where you pull the stock towards your body with one hand and pull the gun’s front part with the supporting hand. When you do this a few seconds before firing, you will manage the recoil and maintain accuracy for the follow-up shots.

A 12 gauge shotgun kick can hurt if you don’t hold the gun correctly.

Always hold the gun tightly to your body, and lean into it to absorb some of the kick. Recoil pads can also minimize pain and bruising.

Once you get your shotgun, shoot some practice rounds first until you get used to it. Remember, switching to a smaller bore isn’t always the solution since they may be lighter, hence more recoil.