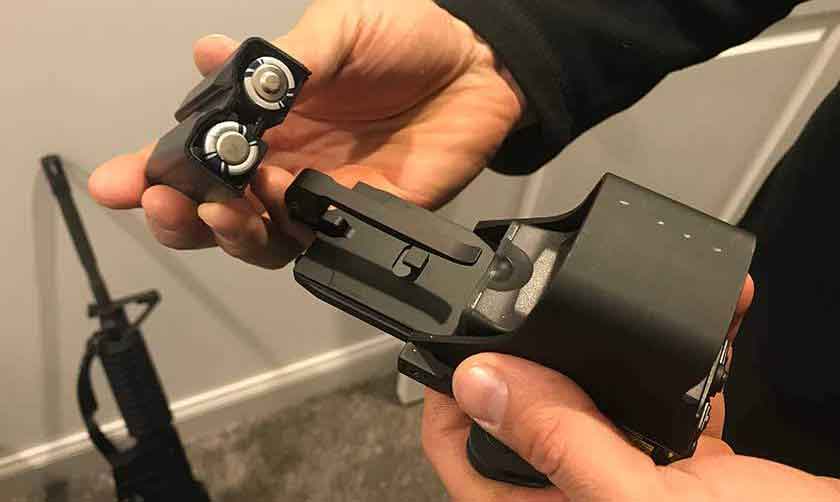 Since laser eats up more power than an LED source, holographic sights’ batteries have shorter life that reflex red dot sights’. The only exception to this is the Holosun devices, which use a new technology that uses LED and combines solar cells with traditional batteries to ensure a 50,000 battery life – but the technology is so new that it has not been tested enough yet.

Despite this, a lot of shooters still choose to provide their rifles with holographic sights because they’re considered superior to reflex sights, and they learn how to use their sights in a way that make their battery last as long as possible. What is a Holographic Weapon Sight?

Holographic sights use a hologram of a reticle image recorded in three-dimensional space onto holographic film at the time of manufacture. This image is built into the optical viewing window, therefore it is part of it. A laser diode illuminates the recorded hologram with collimated light. Collimated light has parallel rays so that it can spread minimally as it propagates and doesn’t disperse with distance. Instead of using screws or dials, a holographic sight can be adjusted for range and windage by tilting or pivoting the holographic grating.

A possible issue with holographic sights is that there can be changes in the laser wavelength due to temperature. This is compensated by employing a holographic grating that disperses the laser light by an equal amount in the opposite direction as the hologram forming the aiming reticle.

A holographic sight isn’t parallax free, which means that the aim point shifts when moving the eye position. This can be compensated by setting the holographic image at a distance: the parallax will diminish at zero at the set distance (usual sights are set at a target range of 100 yards).

The optical window in a holographic sight looks like a piece of clear glass with an illuminated reticle built in it – this allows the device to have an infinitely small red dot, usually 1MOA, which is great for having a visible red dot that doesn’t obscure the target.

Holographic sights are considered superior to reflex and prism red dot sights for several reasons, other than featuring the finest dot available in any optic:

Typical holographic sights have a battery life of about 100 hours, but some more advanced – and expensive – models can extend it into thousand of hours. They do this through auto-off timers: these systems turn the sight off when it’s not used so that the battery can last a lot longer. If your sight doesn’t have an auto-off system, you can always remember (or try to remember) to turn it off when you don’t need it. This simple habit can extend your holographic sight’s battery life.

What Batteries Do Holographic Sights Use?

The EOTech 512 Holographic Sight uses 2 lithium batteries which ensure a battery life of 1000+ hours. The device is also provided with an auto turn-off system that turns the sight off after 8 hours.

This holographic sight by Vortex uses a single CR123A battery. The device is also compatible with the LFP123A, which is the rechargeable version of the CR123A. It can be recharged through a Micro USB port and it will recharge while in the sight. The rechargeable version doesn’t have as long of life for continuous use as a standard CR123A. But it provides the advantage of recharging.

The Razor AMG UH-1 also features an auto shut-off system that turns off the sight after 14 hours if no button is pressed.

The expected battery life is 1500 hours.

This holographic sight uses an LED technology and a combination of battery plus solar system that can provide a battery life as long as 50,000 hours (it’s almost 6 years!). The battery it uses is a standard CR2032. In particular, the sight is powered exclusively by solar cells under normal usage and it uses a back-up battery to supplement power requirements in low light conditions – this is how its battery life can be so long-lasting. On the other hand, the Holosun sights are quite new in the market (Holosun Technologies was established in 2013): no one can say if it’s true that the battery can last six years since no one has still used a Holosun sight for so much time.

Sightmark Ultra Shot M-Spec is the cheapest device on this short list. It features a standard C2 battery and can run for 1,000 hours. It is provided with an auto shut off system that turns off the sight after 1 hour. However, 1000 hours are guaranteed when the sight is used with low brightness settings – so, since you won’t be using your sight exclusively with a low brightness setting, you must be aware that the battery will probably last a lot less than 1000 hours.

What Is A Holographic Sights Average Battery Life?

Holographic sights have a shorter battery life than reflex red sights. From the examples we listed above, we can calculate an average battery life of 1,000 hours. We must keep in mind, though, that this average value refers to medium-power usage: when you use high brightness dot settings, the battery would drain a lot faster and its life would shorten a lot.

The reason why holographic sights drain a lot more power than other types of red dot sights is that they use a laser instead of an LED source: this eats up lots of energy so that holographic devices’ batteries tend to have a shorter life span.

Holosun seems to be the only exception to this, but the company and their technology are so new that has not been tested enough to state their reliability.

Manufacturers have provided their devices with systems that, if used properly, can make batteries last longer. You should be aware of them and learn how to use them properly to be sure you’ll never find yourself with a dead battery in the middle of an operation.

Holographic sights are considered superior to reflex and prism sight under almost any aspect – except battery life. Manufacturer and users are aware of this and learned how to make

And resorted to technology and habits to make batteries last as long as possible. In fact, in spite of the shorter battery life, a lot of shooters still choose to purchase Holographic red dot sight for their rifles.