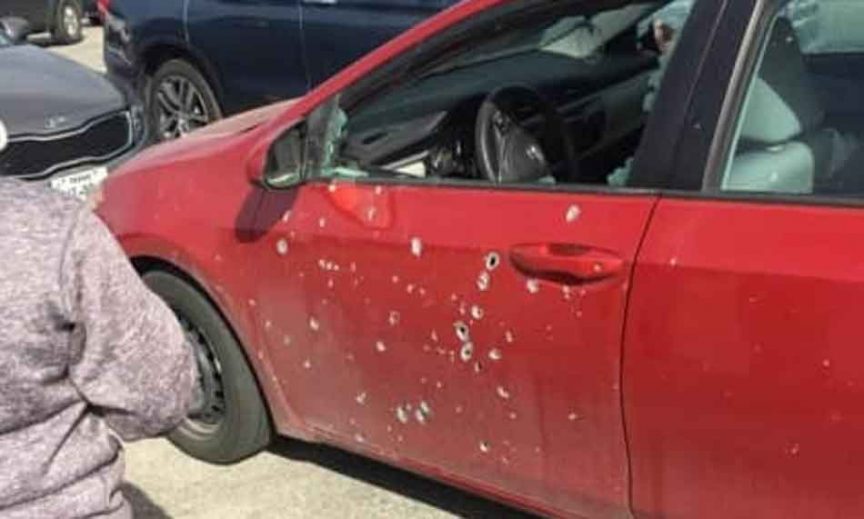 Everyone loves a good action movie. Everyone likes the escapism, and pretty much everyone also knows they aren’t entirely realistic. At least the good ones aren’t.

Blended in with the absurd action though are some scenes that seem completely sensible. How many action movies have you seen where either the main character or startled extras dive for cover behind a vehicle when the shooting starts.

There’s an argument for saying that it has subtly given people the idea that hiding behind a car is a pretty sensible idea when bullets start flying.

In a given situation where you may need to take cover behind a car will it offer protection? In short, in terms of bullet protection, can you use a car as cover?

A car will offer protection against bullets from some small caliber arms fire and birdshot from a  12 gauge shotgun, both of which won’t penetrate the vehicle skin. Calibers like 38 special and 9mm rounds will penetrate both doors 40 to 50% of the time. High powered rifles in .223 or 5.56 will easily penetrate the car but are stopped by an engine block. A vehicle offers concealment from fire, and is good cover from small arms fire only.

This started as a small curiosity, as I was watching a film where this happened. Having been in the army, it did occur to me why some people hid where they hid. I did realize it was a film, but it did provoke an interest in finding out more specific information.

During the research, I did come across a video series that I thought answered the question quite well and thought it was better to walk you through the findings.

Firstly, for those that haven’t had military training, there’s an important consideration, that although is addressed in the video, bears repeating.

In terms of hiding from effective fire there’s a difference between concealment and cover. 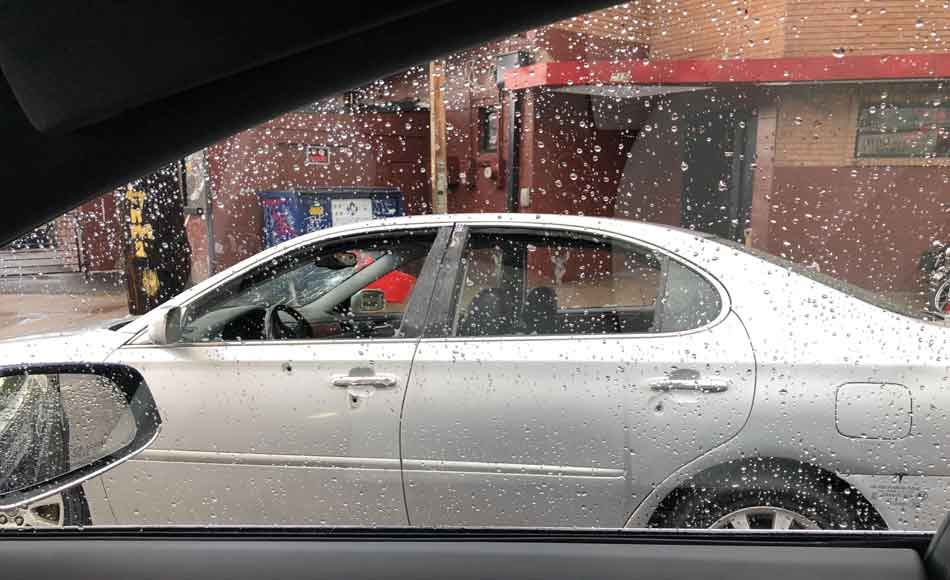 Concealment vs Cover – The Crucial Difference

This difference seems inconsequential, but it isn’t. Each has very different meanings from a  tactical point of view.

The crucial difference revolves around safety. You can be effectively concealed behind a couch. You might not be observed by an intruder, but the couch offers no protection from bullets.

Now imagine sitting in a bulletproof vehicle. You are no longer concealed as an assailant can see you. However, you have effective cover as rounds will not pass the bulletproof protection.

There is actually a simple axiom.

Again, think of the difference between bulletproof glass and some shrubbery. One offers protection despite being able to see the target, the other offers no protection and relies on remaining unobserved.

Ideally, you want both.

It also isn’t a static explanation as you can be covered from 22lr rounds, but not from .223 Remington. It very much depends upon the type of rounds that your cover stops.

A Vehicle As Cover From Fire

So, a car if you duck down and remain unobserved by an assailant is effective concealment. However, is it effective cover?

Well, here’s the first video that nicely explains that question.

There’s quite a lot to take in with that video so let’s walk through it.

Both standard NATO rounds (5.56mm and 7.62mm) rounds fired through 2 car doors, only half the rounds from each caliber penetrate both doors and go through plywood on the opposite side.

Thus anything more powerful than NATO cartridges will pass through both sides of a vehicle. Rounds like .308 Winchester, .30-06 Springfield, 10mm, or 44 Magnum will thus give the same result.

A vehicle door (or two) offers no protection from consistent fire from rifle rounds.

45 ACP And 9mm Rounds Through A Car

The test for this was specifically to see whether the two skins of a vehicle provide cover.

With a 45 ACP fired through the trunk of a car, a good number of the rounds pass through both skins of the vehicle and would be lethal to a human body on the other side.

With 9mm rounds, all 5 rounds penetrated both skins of the vehicle and were lethal to anyone hiding.

A lot depends upon where the bullets go inside the car, as certain things inside can cause deflections rather than providing an impasse for the bullet.

Thus you could be struck by a defected round rather than one traveling line of sight from shooter to the person hiding behind the vehicle. 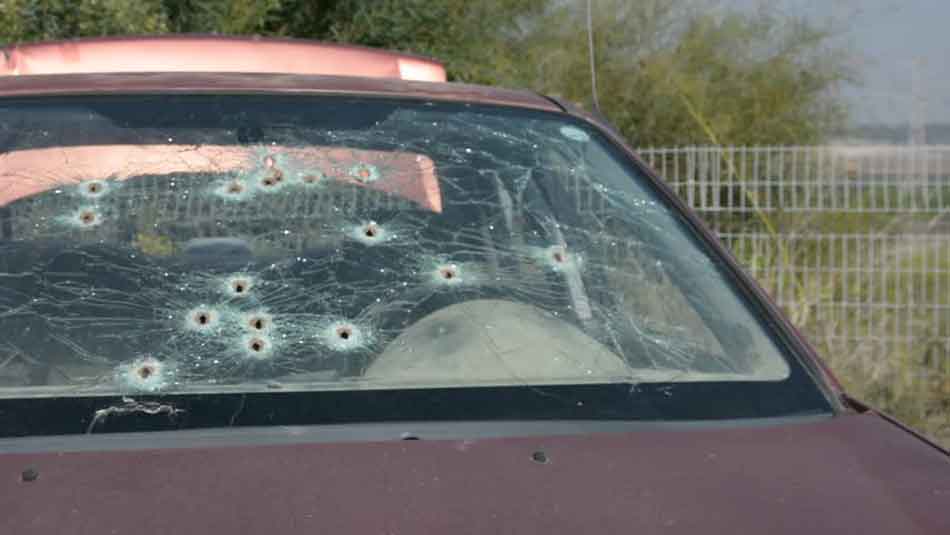 22LR Rounds Through A Car

7 rounds were fired into the truck skin from 7 yards away. Only 1 round penetrated and hit the target on the other side of the second skin.

So it seems a car offers much more protection from 22lr rounds, but it isn’t guaranteed. That one round could still produce an unhappy result.

12 Gauge Shotgun Through A Car

A total of three cartridges were unloaded which would have been many hundreds of pellets from 15 yards away. The cartridges were loaded with birdshot and non of them penetrated the first skin of the vehicle.

So a car door offers cover from a 12 gauge shotgun loaded with birdshot.

With 4 shots of 12 pellet buckshot at the vehicle, again from 15 yards away, the buckshot does not seem to penetrate the truck area of the car, nut 10 of the 24 pellets that hit the door went through the door.

But not the second door. So aimed at a car door, just under half the pellets from buckshot will go through the door and strike an occupant inside. Only 1 pellet made it to make a dent in the second door.

Although you’d be safe if you were in the trunk.

A car seems pretty good cover against a shotgun.

So, what about the rather more powerful shotgun slugs?

With 6 hits from the 12 gauge shotgun slugs at a distance of 15 yards on the drivers door, only 3 made it through to penetrate the passenger door.

13 .40 Smith and Wesson rounds in 180gr were fired through the drivers door with the objective of them passing through the vehicle.

Only 3 passed through the passenger door to be lethal the other side.

15 9mm 147gr rounds were fired at the same car door from the same distance. This time 4 rounds went through, so about the same percentage.

This time NATO standard rounds were fired from 30 yards away.

With 25 rounds of penetrating rounds, none of them got through the engine block.

So, we can conclude that an engine block stops NATO rounds, and a vehicle skin can stop 22lr rounds and birdshot from a 12 gauge shotgun.

The Tactics For Using A Car As Cover

Interestingly there’s a second video in the series.

This one more concentrates on tactics that are available to someone seeking cover from fire.

The presenter makes a really interesting point in the opening minutes of the video. That of speed.

Although a car may offer adequate protection it may not be the best available, but the point is if the situation is critical, then you have to decide quickly.

If the most unfortunate event happens then a split second of paralysis can effectively mark you out as the target to aim for. If you instantly dive for concealment or cover and others don’t, then they make easier targets.

At that point, the assailant may be deciding on the shot and will take the easiest option most of the time. Moving targets are harder than stationary ones.

The video talks more about returning fire, rather than what to do if unarmed. It’s well worth a watch.

Does A Windshield Offer Protection From Bullets?

Interestingly, I wouldn’t have thought this was a question that needed answering but it is a video that makes some good points.

I’d always put down the fact that a bit of glass in the windshield that chips with small stones wouldn’t really offer any protection at all to bullets.

So, what did we learn?

Well, side and rear windows are made from safety glass which is designed to shatter easily so it’s about as much use as tissue paper as resistance to bullets.

A windshield though is laminated. That’s two bits of glass with some polymer, that offers increased protection, than that of standard safety glass. To stop those stone chips mainly.

A windshield is curved and slanted for aerodynamic reasons so bullets can potentially ricochet, but is primarily designed to stay intact when struck by objects.

The video tries to demonstrate what caliber firearms actually go through a windscreen. Many people think moderately lower power rounds, like 22 short, may not have to power and will ricochet rather than penetrate.

So what’s a summary of the results?

A standing position, a more angular windshield, and a shorter range with higher power cartridges increase the chance of windshield penetration.

All in all, it’s a really good informative video, which actually surprised me quite a bit. 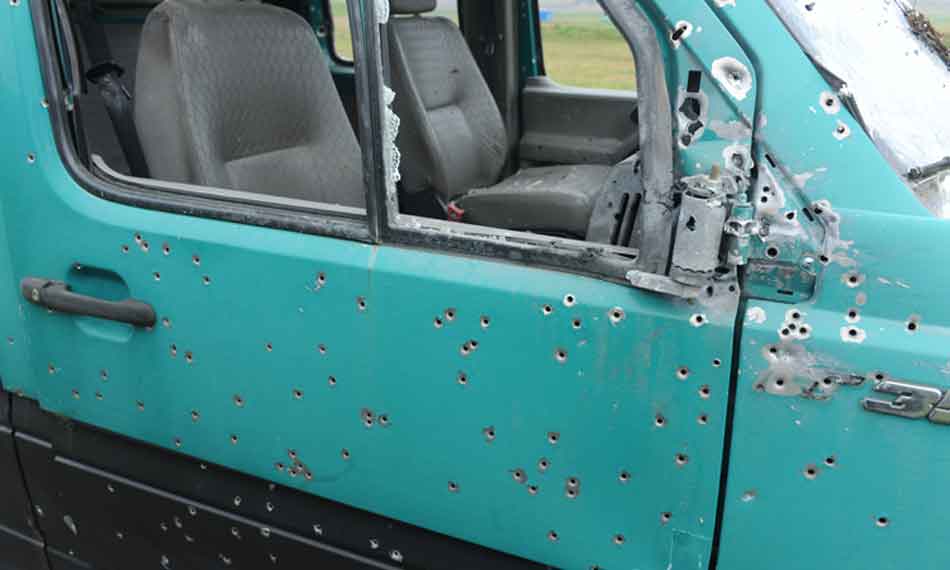 So, when talking about a car when the rounds start flying, it can definitely offer concealment depending on where the shooter is situated.

You should definitely get behind the engine block if at all possible as the engine will stop high caliber military grade rifle ammunition.

What came across you should act and decide quickly to avoid being an opportunistic target, and you can use a car as cover, but not necessarily if there is a viable nearby option, such as a wall.

It seems lower caliber weapons, like birdshot and 22 short will not penetrate the skin of a vehicle with any reliability. The larger calibers though like 45 ACP and 9mm will penetrate doors, and pass out the other side of the vehicle.

As do shotgun slugs and rifle ammunition.

So, a car can do, but as you might reasonably expect, it does depend on the ammunition being used, but the engine block should be the place to go. Although it does rather pin you down.