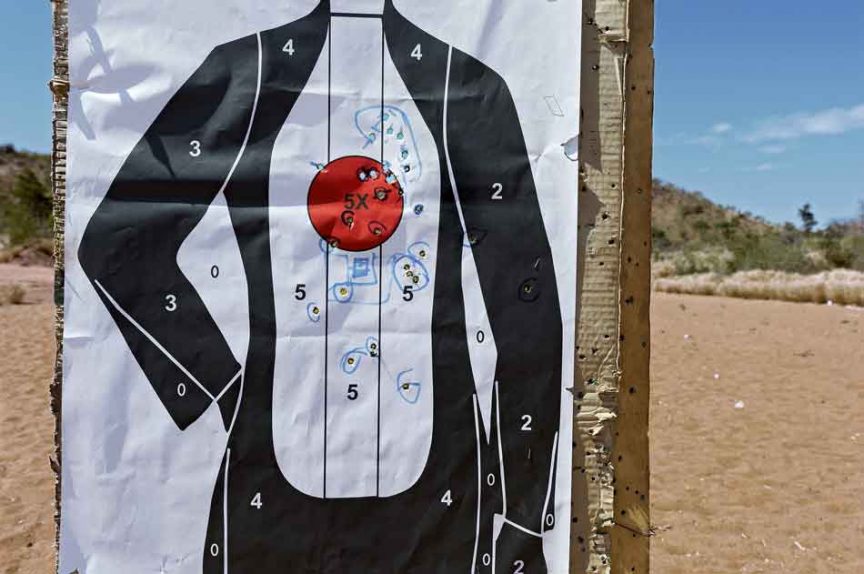 While most don’t often think back to those science lessons long ago, there is some useful nomenclature for shooters in there.

It’s often said that either accuracy or precision are commonly misused terms when on a shooting range, but for those that might not be familiar, what is the difference between accuracy and precision?

For shooters, both terms are reflective of a grouping of shots taken at a target. Accuracy refers to how well the ‘center point’ of the group is on the parget. Precision is the name given to how well the individual shots are grouped.

Although the terms are useful to distinguish between both the terms, both accuracy, and precision are ways of thinking about defining an error.

Accuracy is the mean groupings proximity to the aim point, while precision refers to how close the groupings are respective of one another. Thus you can miss a target, very precisely.

In any scientific experiment, as well as for a shooter it’s obviously desirable to be both precise and accurate.

Accuracy vs Precision – At A Glance

While you can talk about it till you’re blue in the face, a picture paints a thousand words as they say, so the following image demonstrates it. 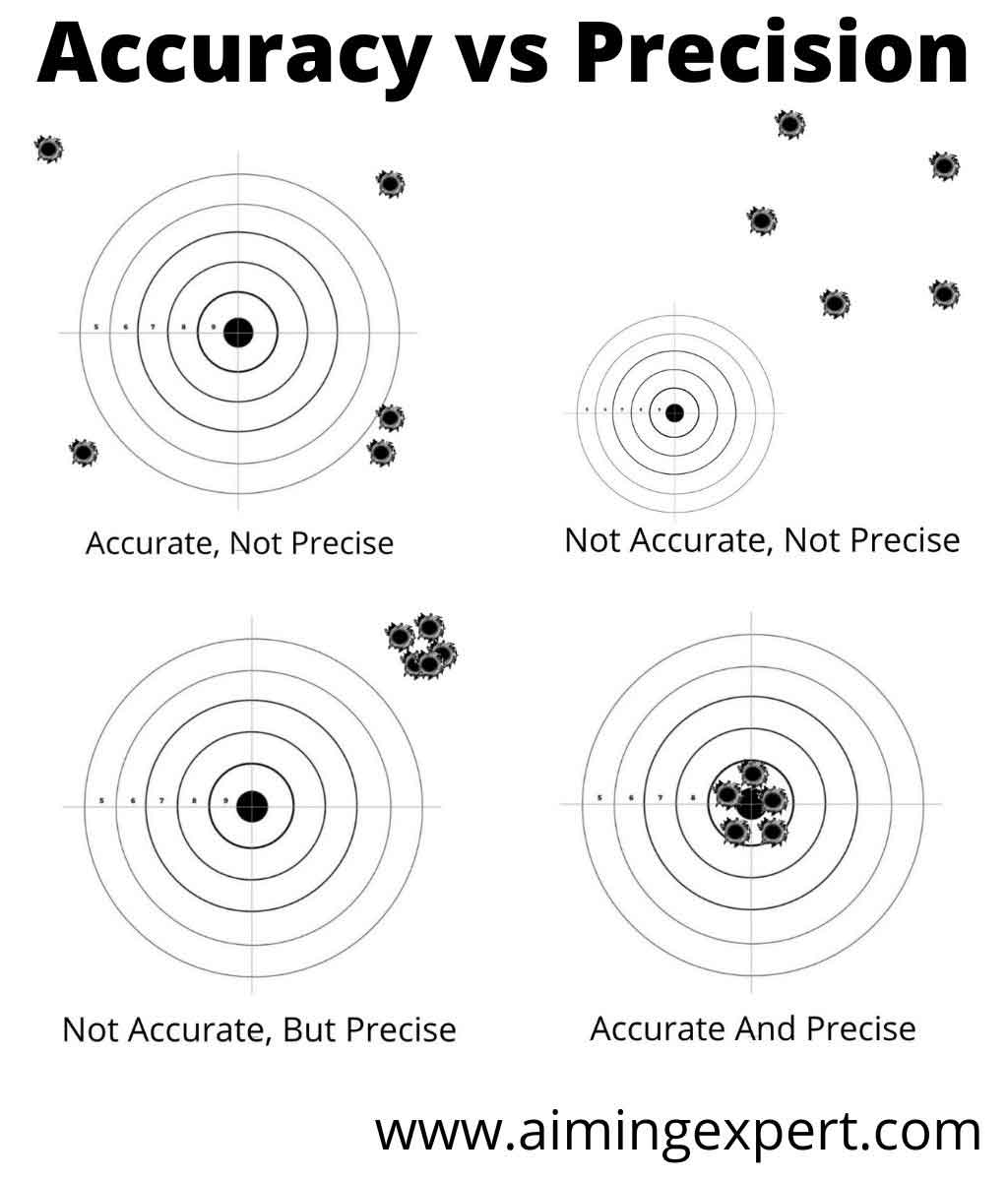 What should be observed is that BOTH accurate and not precise, as well as precise but not accurate BOTH potentially miss a target.

Precise, but not accurate is usually endemic of a rifle being zeroed.

Let’s walk through the above examples more precisely, and try and understand the effect for a shooter.

An Example Of Accurate But NOT Precise

A shooter, whether with a pistol shot or a rifle target tries to place rounds on target but finds the rounds are not falling where they are being aimed, and also there is a wide grouping. 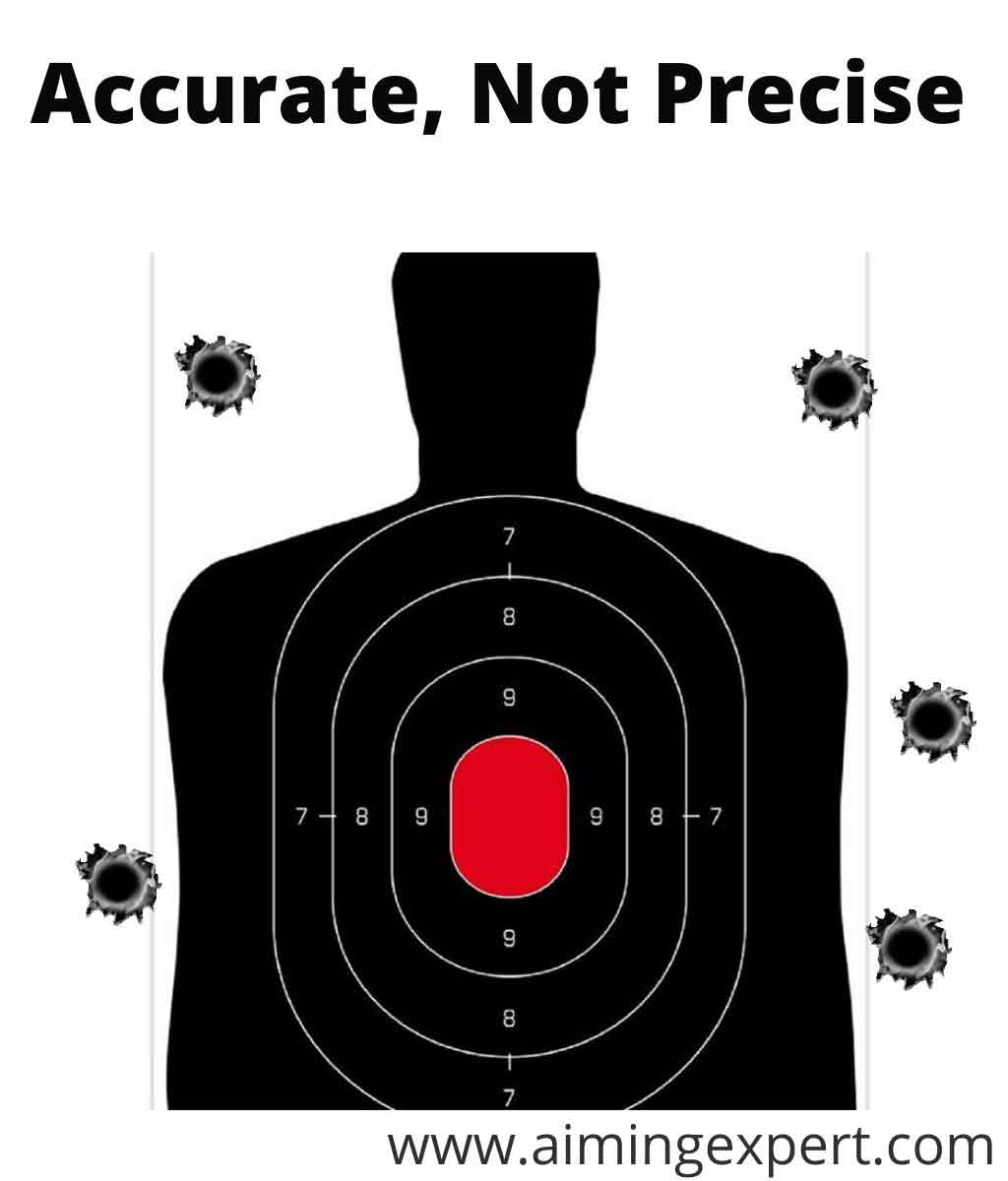 The grouping may be so wide, that the target is not hit at all.

Therefore, the shooting has been accurate, but not precise. The average grouping of the shots places it in the target area, but each individual shot is not near the accurate mean.

Obviously, for a shooter, this may not be ideal. An individual shot may not hit the target when this might be critical. It doesn’t help to have accurate grouping if the target has the capacity to fire back.

In a hunting situation, you may not even hit the target, at least not in the desired area.

An Example Of Precise But NOT Accurate

If the same shooter places shots within a very tight group, but none of the rounds fall accurately, the shooter has been precise, but not accurate.

Essentially the grouping is small, but they are way off target.

This can happen as a rifle is being zeroed in good conditions. The scope is then adjusted to bring the grouping towards the target area, making it more accurate. 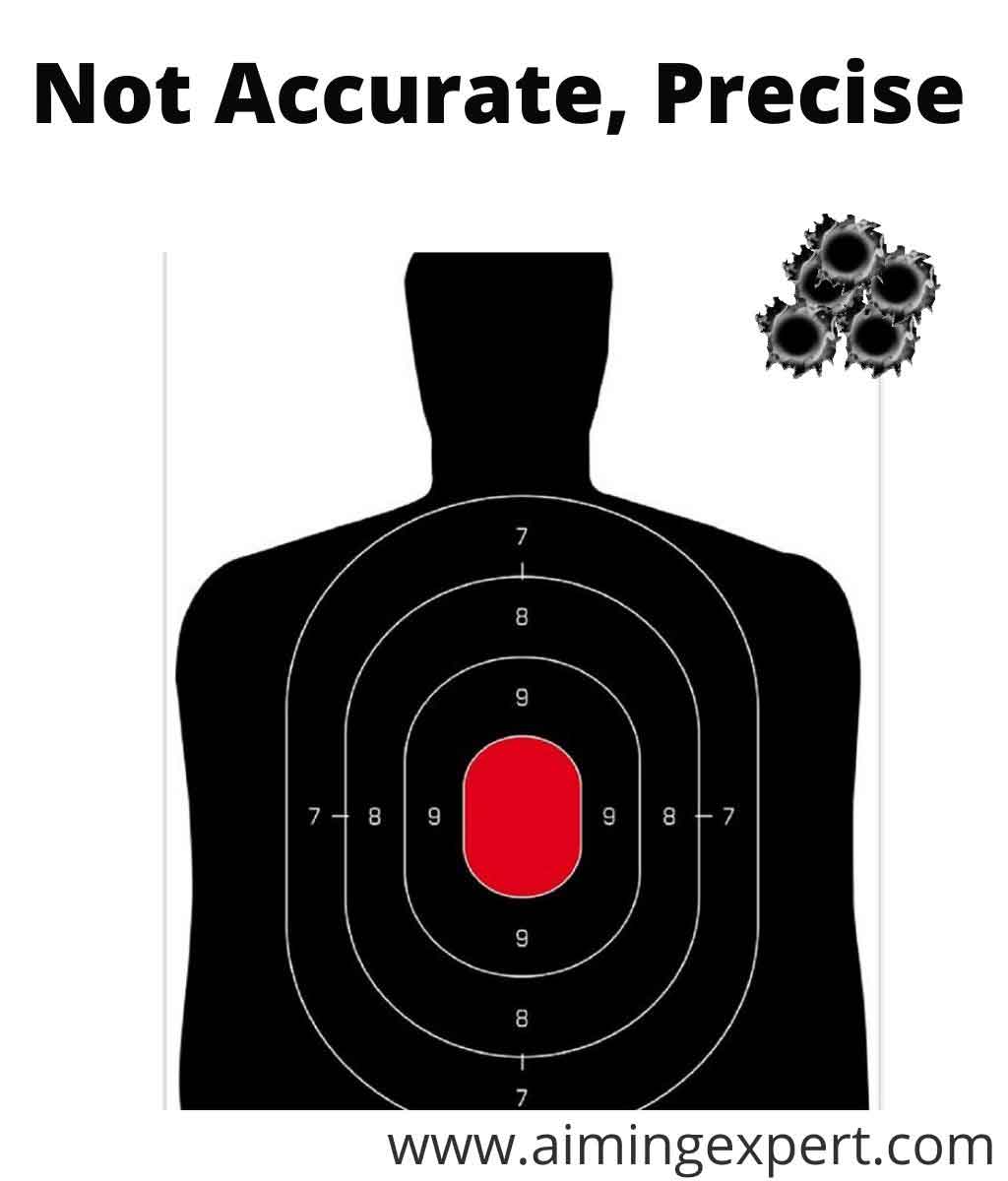 As a shooter, this is also obviously not ideal. For hunting, you will miss the target by the same amount with each round, each round falling on top of each other.

In self defense, it may mean a missed target or one not hit with an incapacitating hit.

An Example Of NOT Being Accurate Or Precise

Of all the cases, this is the least desirable. It essentially means not even remotely on target and the rounds are flying all over the place.

Longe range shooters can experience this as wind, bullet ballistics, and a variety of other factors randomly affect the bullet. 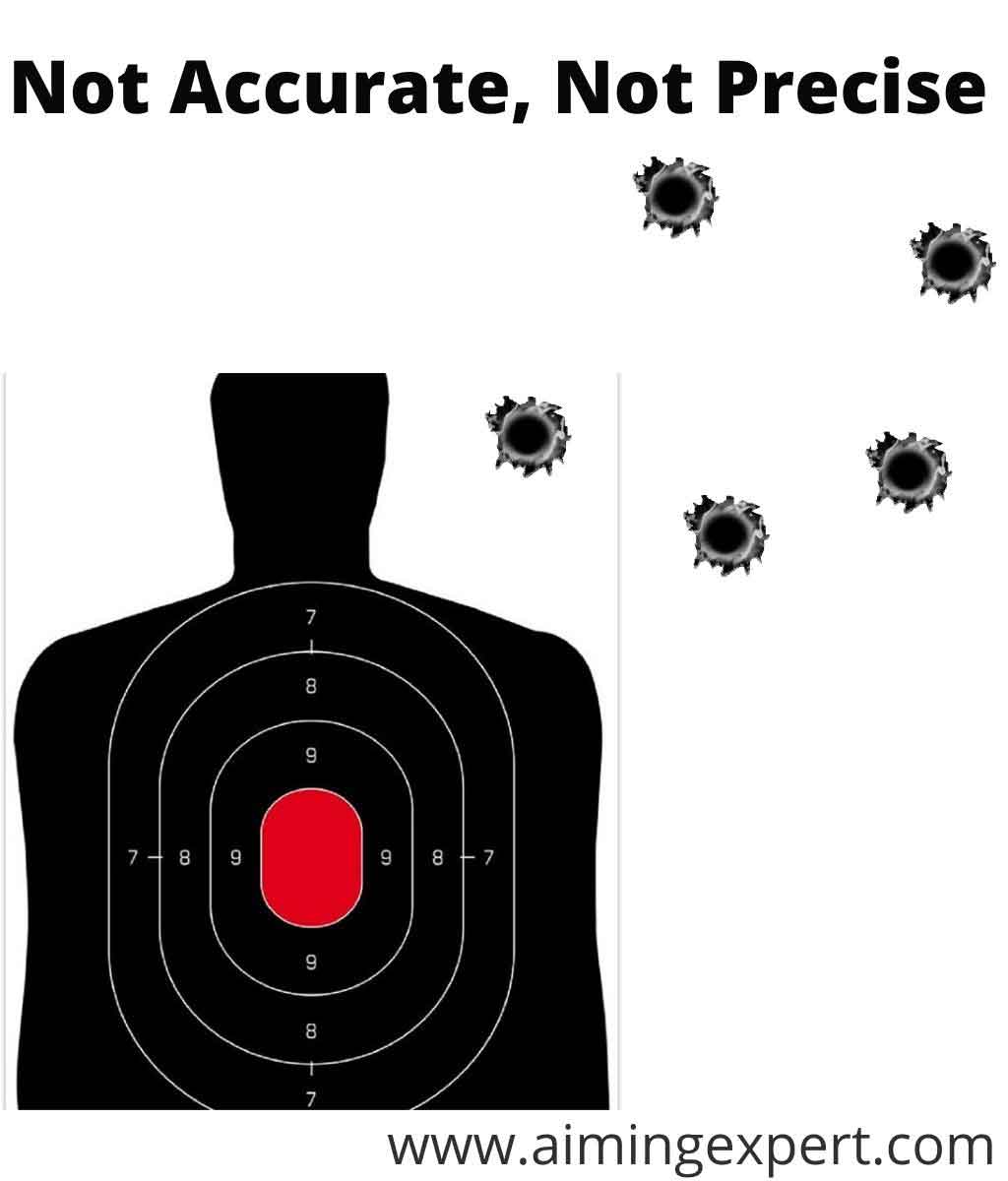 With rounds being scattered all over the place and off target any hit will be more luck than practiced marksmanship.

Again, as a shooter, this isn’t ideal and is often more experienced by beginners to the sport.

An Example Of Being Accurate And Precise

It’s pretty obvious, that this is the most desirable outcome for any group of shots. The shots land on target in a tight grouping.

This is more often aa trait of good shooting by the more experienced shooter. 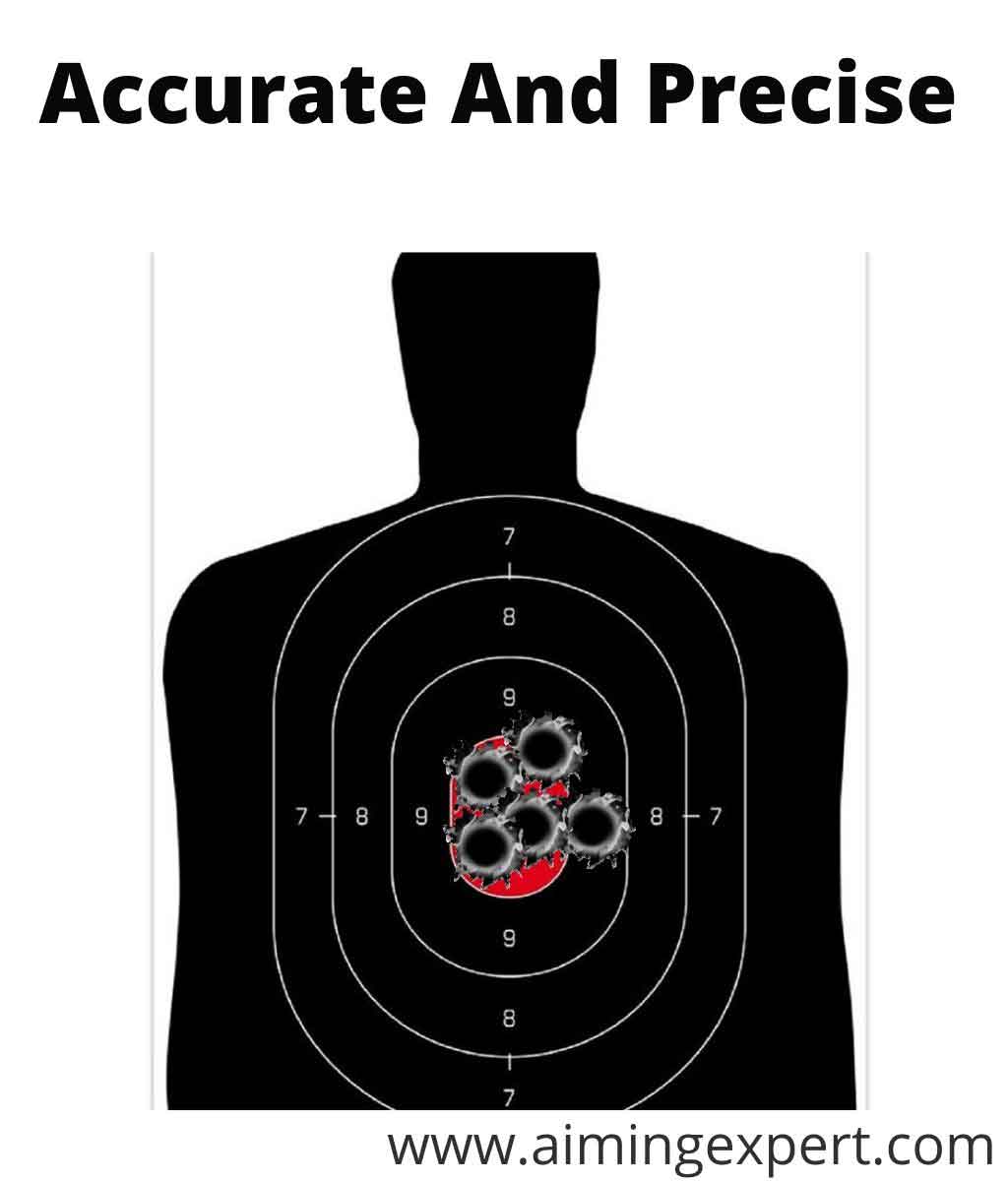 If you can shoot accurately and precisely every time then any hunted quarry or any aggressor forcing you into self defense has a great deal to fear.

What Is Precision Shooting?

Precision shooting is a term associated with long range rifle shooting and typically extends to competitions.

Being accurate and precise at range takes quite a lot of skill, in either a civilian or a military setting.

In single shot rifles, being able to repeatedly put rounds accurately and precisely on target, a shooter must have recurrent drills and practiced motions.

In normal situations, a shooter may be happy to sacrifice a bit of precision for speed, as long as the accuracy remains. Certainly, self defense instructors are happy with this. As long as the rounds land accurately on target, would you care if you had a 1 inch or 5 inch grouping?

So precision shooting is the skill taken to repeatedly place round after round in exactly the same spot at a range.

While many may scoff at your insistence for the correct terminology, for a professional marksman they have very different meanings, even if people do tend to use the terms interchangeably.

Accuracy is essentially the mean average closeness to the actual aiming point or target. Ironically no rounds can hit but the group could be accurate.

Precision means the proximity of each round to one another, thus measuring the reproducibility of each shot. Again, you could be precise but miss the target.

So obviously, a combination of both accuracy AND precision is necessary for the marksman.

Each and every round landing exactly where you mean them to go is desirable for any shooter, whether, sporting, hunting, or recreational.

Many factors can determine the placement of rounds, as shot placement is the desired goal of anyone with a firearm.

Inexperience, stance, wind, excessive range, bullet tumble, or incorrect rifling can all play their part. As can incorrect breathing, or a firm grip on the firearm.

Many factors can be learned as a skill while others are more in the lap of the gods it seems.

However, if in the presence of experienced shooters, then using the terms interchangeably can lead to confusion, so learning what they mean is a distinct advantage.

Being accurate AND precise is the goal of any aspiring marksman.